It's hard to believe that a company such as Microsoft Corporation (NASDAQ:MSFT) could still be considered a growth story. After all, a 30-year old company that's dominant in their industry is usually considered "mature" – a corporation whose revenues grow incrementally at best. However, this description does not apply to Microsoft which has had year-to-year top line growth between 5%-11% since 2010. Buyside analysis, however, do not end here. Potential investors should avoid purchasing an issue when solid growth is not supported by a strong balance sheet or solid cash flow. Fortunately for potential investors this tech company has a rock solid balance sheet and continuously strong free cash flow. One additional factor is the company's current dividend yield of 2.889% and five-year history of increasing dividend growth. When these fundamental factors are added together, the decision to buy becomes a matter of when and not if. And, as an analysis of the chart shows, the time to buy is now, as the security is trading about 5 points above is one-year low.

Let's begin our analysis by looking at their one-year price chart: 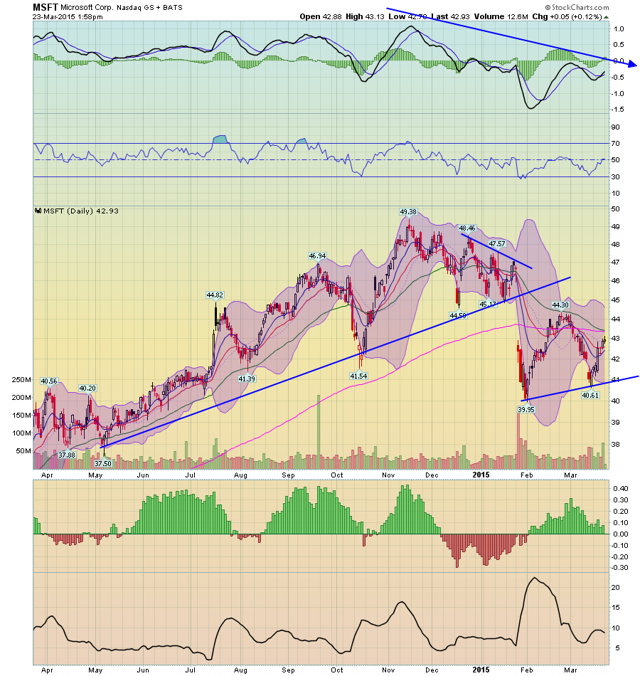 Microsoft rallied from May 2015 until early November when prices started to slowly move lower. They consolidated in a triangle pattern from mid-December to mid-January. Prices broke through support at the end of January on a disappointing earnings report. Since then, they have been consolidating between the lower and mid-40s.

At these price levels, MSFT is slightly undervalued as shown on this table from Morningstar: 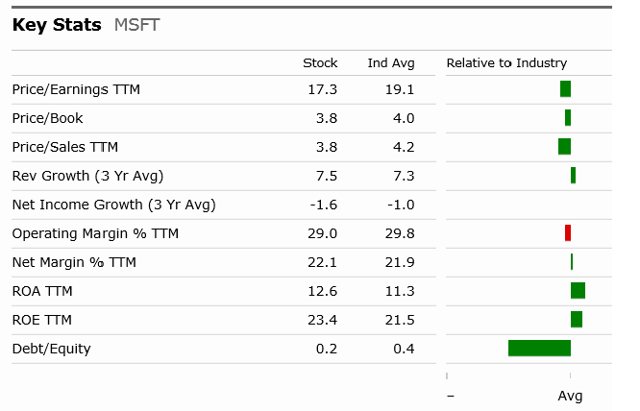 MSFT is slightly undervalued on a PE, price/sales and price to book level. This gives us room to move a few points higher which is increased slightly when you consider the company slightly outperforms their industry peers on ROA, ROE and net margin.

Let's turn to the financials, starting with the balance sheet. Like most tech companies whose primary asset is intellectual property, this is a beautiful financial document. The current ratio is 2.45 while the quick ratio is only slightly lower at 2.24. The company has been keeping a close eye on receivables, with the percentage of assets dropping from 15.1% in 2010 to 11.34% in fiscal 2014. They also keep a ton of cash handy – they have $85 billion on their 2014 balance sheet, with most of their holdings in short-term securities. Fundamental investors should like that their overall book value has increased from $46.175 billion in 2010 to $89.784 in 2014, which is almost a doubling in five years. The only "drawback" is their increased use of long-term debt, which now totals $20.6 billion. But with an interest coverage ratio of 50.8, it's difficult to be concerned. The balance sheet indicates they have ample liquidity and have kept receivables well-managed. Their near-doubling in book value over a five-year period also indicates they have shareholder interests at heart. Finally, they most likely tapped the debt markets to prevent a high tax bill from repatriation of foreign holdings.

Their cash flow statement is no less impressive. They've had free cash flow of between $22 billion and $29 billion over the last five years giving the company ample financial maneuvering room. This allows them to self-fund most small acquisitions (those involving both companies and property) if they desire.

And finally, we have their income statement. As mentioned in the opening paragraph, the company is growing between 5%-11%/year. They did have a large 5% jump in COGS in their latest annual statement. They offered the following explanation in their 10-K: "Cost of revenue increased mainly due to higher volumes of Xbox consoles and Surface devices sold, and $575 million higher datacenter expenses, primarily in support of Commercial Cloud revenue growth. Cost of revenue also increased due to the acquisition of NDS." This trend continued in their latest quarterly statement, increasing COGS by 8.1%. While this is not an optimal development, it is partially caused by their move into cloud-based computing, which most analysis (myself included) believe will provide solid growth avenues for the foreseeable future. In addition, there are continued costs related to the Nokia acquisition, as they noted in their latest 10-Q: "Cost of revenue increased, mainly due to the acquisition of NDS." These increases should subside in the next 4-6 quarters.

I have to admit that I have made my fair share of Microsoft jokes, even referring to them as the evil empire on more than one occasion. But all kidding aside, it's hard not to like the company. They have solid revenue growth, a very strong balance sheet and the company literally prints money. They've been increasing their dividend for the last five years and have ample cash and potential revenue growth to continue this practice for the foreseeable future. All these factors add up to a solid company.