May Payroll Report Probably Puts the Fed on Hold

With the weak nonfarm payroll report on Friday, heightened concern arose about the pace of economic growth or lack thereof. Pundits and market indicators believe a Fed rate increase in June is off the table. A weak payroll report is an indicator of a weakening economy and certainly the trend in nonfarm payrolls has been a declining one. This declining trend has been in place over several months, +233,000 in February, +186,000 in March, +123,000 in April and +38,000 in May. Determining what this means as investors look ahead for the balance of the year is important. I believe Scott Grannis provides good insight on Friday’s report and implications for the months ahead in his post, No Improvement in the Jobs Market.

The weak payroll report comes on the back of some weakness in the manufacturing data. For example, in late May the Durable Goods report saw core capital goods orders decline a .8%. However, there are some bright spots in a few of the manufacturing reports. For example, Econoday noted, “There are…solid points of strength in the report including 0.6 percent gains for both total shipments and total unfilled orders. The gain for unfilled orders is the largest since July 2014. Another plus is a 0.2 percent decline in inventories which pulls down the inventory-to-shipments ratio to a leaner 1.65 from 1.67. A graph of the unfilled orders chart is below. A small positive is the fact unfilled orders have increased in three of the last four months. 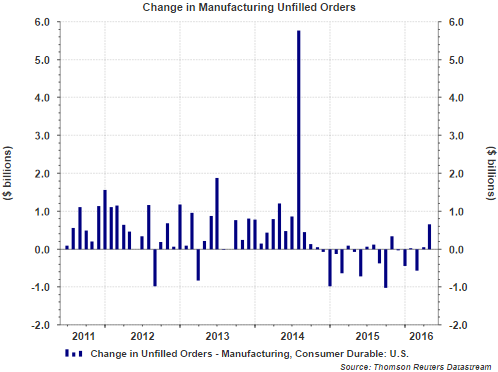 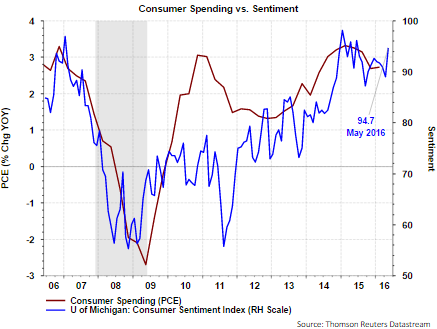 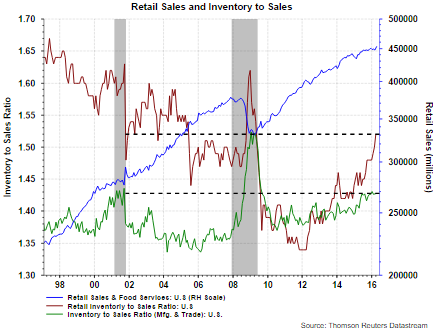 A final question revolves around how are consumers financing this spending. Clearly, the below chart shows borrowing has been an important source of funds. 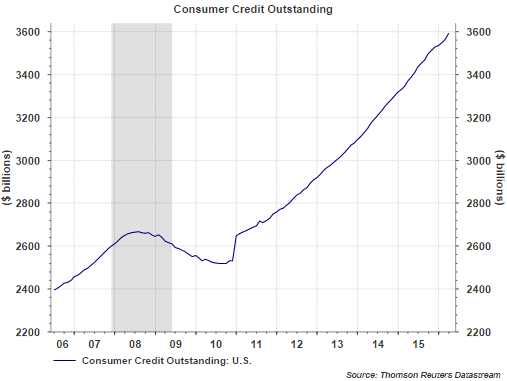 This increase in consumer credit outstanding certainly raises the question of the ability of these consumers to repay their debts. Positively, debt payments as a percentage of disposable income remain at levels seen in the early 1980s and down from the 2004 high of 13.2%. 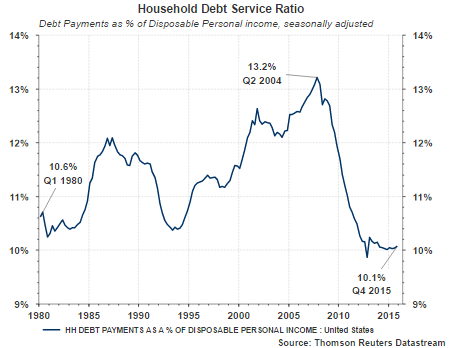 Manufacturing sector growth has slowed to a snails pace as well. In our view this has become the norm in this subpar GDP growth economy. As the below chart shows, the Composite PMI is near contraction, not unlike the economy has experienced a number of times since the end of the financial crisis. 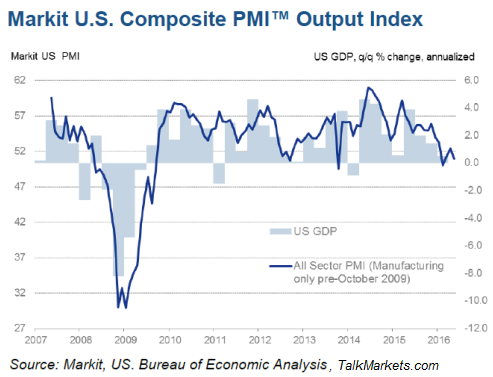 In summary, Friday’s payroll report probably puts the Fed on hold for a rate increase this month. Reading the Grannis article mentioned in the opening paragraph places Friday’s report in proper perspective. Data suggests the consumer is on pretty sound footing and they are responsible for more than two thirds of economic activity. Given the consumer is a fairly good shape, we believe this factor provides support for continued economic growth, albeit subpar growth. On top of all of this is the fact consumers, businesses and investors will continue to face election year rhetoric that most likely leads to continued market volatility. However, a recession does not seem in the cards at the moment.