EconMatters- June 26, 2015, 4:50 AM EDT
SHARE ON:
By Joseph Hogue
The surge in natural gas production has changed the energy landscape in the United States. Production jumped 44% between 2005 and 2014 compared to a decline of 4.5% over the previous nine-year period.
Prices for natural gas at the Henry Hub in Louisiana jumped 162% between 2002 and 2008 on lower production and an economic boom in emerging markets. By 2012, prices had fallen nearly 70% to $2.75 per million BTU. Beyond a few spikes on colder weather, prices have flatlined between $2.50 and $3.50 for the past two and a half years. 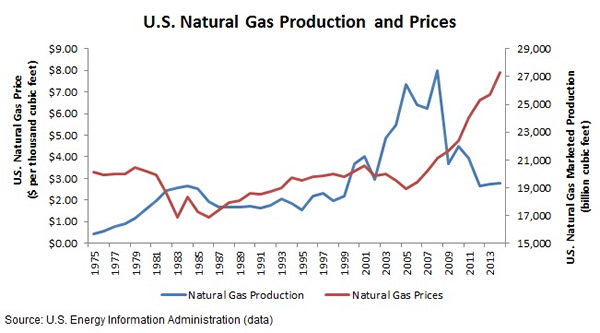 Futures prices on the Chicago Mercantile Exchange (CME) suggest traders are not expecting much to change this year, with the December contract priced at $3.17. But two catalysts may prove speculators wrong and spark a rally in natural gas prices. Traders who get positioned now stand to make up to 50% profits without ever touching a futures contract.

Natural Gas Exports About to Surge

Natural gas exports have increased along with the production surge, but regulations that prohibit export to non-free trade agreement countries without approval seriously limit how much can be exported.

Price differences between the United States and the international market present a huge opportunity for producers. In 2014, pipeline exports to Canada and Mexico, which accounted for 99% of total export volume, fetched producers an average price of just $5.40 per thousand cubic feet, while natural gas prices are as high as $7 per million BTU in Europe and $10 per million BTU in Asia.

The difference in U.S. and international costs has helped spark a manufacturing renaissance in the United States — but it’s also a strong incentive to build LNG export facilities and seek shipment approval.

A total of 17 LNG export projects have filed applications with the Department of Energy (DOE) to export natural gas to countries that are not participants in the free-trade agreement. Seven projects have been approved so far, and given the administration’s recent comments it is likely more will be.

U.S. Energy Secretary Ernest Moniz, recently said he believes the United States is going to become a big player in the global LNG market, potentially exporting as much as Qatar, the world’s largest exporter, by the end of the decade.

The beginning of an era of surging natural gas exports could help boost sentiment and have investors rushing into the commodity.

The number of natural gas drilling rigs in operation has dropped nearly 30% from a year ago, according to Baker Hughes.

Bentek Energy reports that May natural gas production was down 0.5% to 72.6 billion cubic feet from the previous month but 7.2% higher on a year-over-year basis. This is because the rigs being taken off market are older, less efficient and employed in secondary production regions. Producers have shifted focus to more efficient rigs in core producing regions to maintain production.

The effect of the drop in rigs lags a bit, so natural gas production could start showing signs of weakness by the end of the year. A focus on fewer fields means those fields will deplete more quickly. Unconventional plays such as shale have a faster depletion rate than traditional fields, and we could start to see production come in below estimates as reserves run low. Additionally, running rigs at a higher capacity could lead to more downtime on maintenance.

The EIA forecasts U.S. natural gas consumption will rise 13.7% in 2015, so any slowdown in production growth could drive prices much higher. Wild cards like warmer weather through the summer or an especially cold start to winter could do the same.

Forecasts put natural gas prices around $4 by the end of the year. I think these estimates are conservative and do not account for lower production and stronger investor sentiment on increased LNG exports.

The United States Natural Gas Fund is designed to track the change in natural gas in percentage terms by holding futures contracts traded on the NYMEX.

I think UNG could easily move to $16 by the end of the year, an 18% move, based on the multiple catalysts for higher natural gas prices discussed above. If that target is hit, the option would be worth at least $3 ($16 ETF price minus $13 strike price) for a 50% return in about seven months.

By buying call options, investors can take advantage of this move in natural gas that few folks are expecting without a futures account.

All of these trades were recommended by options prodigy Jared Levy, who has created a technique that has delivered average annualized gains of 123%.