Look Out Below! Oil Prices Will Fall 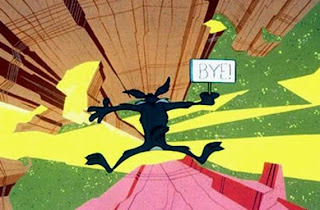 The oil price collapse is not over yet. It is more likely that Brent price could fall back into the mid-$50 range than that it will continue to rise toward $70 per barrel.

That is because oil prices have risen based on sentiment alone. The fundamentals of supply and demand indicate a dismal reality: oil prices will fall and may fall hard in the near term.

Our present situation is like that of the cartoon character Wile E. Coyote. He routinely ran off of a cliff and as long as he didn’t look down, everything was fine. But as soon as he looked down and saw that there was no ground beneath him, he fell. Hope and momentum cannot overcome gravity.

Neither can ignoring the data.

When I look down from $60 WTI and almost $68 Brent, I see no support except sentiment. Like Wile E. Coyote, we need a gravity lesson about oil prices. What goes up for no reason, will come down sooner than later and it may fall hard. 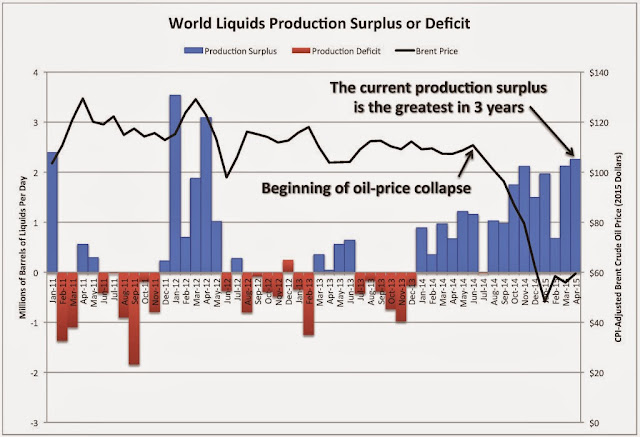 The latest data from IEA indicates that the production surplus in first quarter of 2015 is the greatest of the last decade and much greater than during the 4 previous quarters (Figure Below). 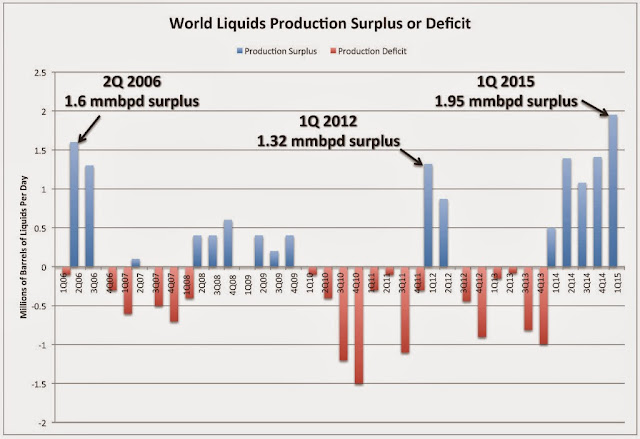 With data like this from EIA and IEA, how can anyone be optimistic that even higher oil prices may be coming? How can anyone say that the price increase in recent months has any relationship to reality whatsoever?

Both IEA and OPEC offered grave concerns about persistent over-supply in their recent monthly reports that seem to have been ignored or dismissed in the jubilance of higher oil prices.

Analysts may be hopeful that the drop in U.S. rig counts–which has almost stopped in the last two weeks–will result in a decrease in tight oil production. I believe that is true but the U.S. is not the world and the world continues to add production.

With somewhat higher prices, some tight oil producers like EOG say they are ready to aggressively grow production again if prices stabilize around $65 per barrel. If other producers do the same, so much for the as-yet-to-be seen production decline from lower rig counts.

Many point to signs of increased oil demand because of low product prices as a positive trend. I agree but as long as production is growing faster than consumption, we have an over-supply problem. I hope that the rebound in oil prices over the past two months is sustainable and that prices continue to rise. But hope doesn’t count much for very long in global markets. The data so far says that the problem that moved prices to almost $40 per barrel in January has only gotten worse. That means that recent gains may vanish and old lows might be replaced by lower lows.

Wile E. Coyote never learned the lesson of gravity but that was in a cartoon. This is real.