The price of King Digital Entertainment PLC (NYSE:KING) was quite the site after they reported Q1 2015 earnings on May 14th. After falling nearly 15% in after hours trading, shares recovered into positive territory the next day. Some may attribute the recovery to the significant amount of shorted shares (22.06% short percent of float) covering, but no matter the reason it is important to digest the Q1 earnings call to learn what this stock has in store.

“We expect to see the impact of not launching a new title in Q1 this year. Last year, we launched Farm Heroes on mobile in January, which helped sustain a strong bookings trend into Q2. This year, our first launch will come later in the year in the back half of Q2 and we expect to see some softening of our bookings as a result. However, we expect the upcoming launches of AlphaBetty mobile, Paradise Bay and other 2015 titles to stabilize and then reverse these trends in the latter part of the year.”

As evidenced by lackluster guidance of Q2 gross bookings between $490 million and $520 million, investors don’t have much to look forward to next quarter due to a lack of game launches and what is seasonally a slower quarter for King. But, looking at a slightly longer term picture, a diversifying King looks to have an impressive year end ahead. Starting at the end of Q2 2015, King has announced they plan on sustaining a pace of 1 or 2 new games on mobile each quarter, which should help them continue to grow.

King did announce that after releasing Candy Crush for Windows Phone, they expanded their partnership in a big way. Windows 10 will automatically include King games for periods of time following game launches. This massive user base is simply another exciting way for King to show off their games and acquire more users.

Though King has many games which are not named “Candy Crush,” it is exciting to see them start diversifying away from the colorful fun puzzle games with their upcoming releases. AlphaBetty, a word game, and Paradise Bay, a cross between minecraft and farmville, is the first release from recently acquired Seattle studio Z2. King has had success launching their games in the past, and shows wisdom by currently “soft launching” both of these games to give users the best possible experience when they first play the game. 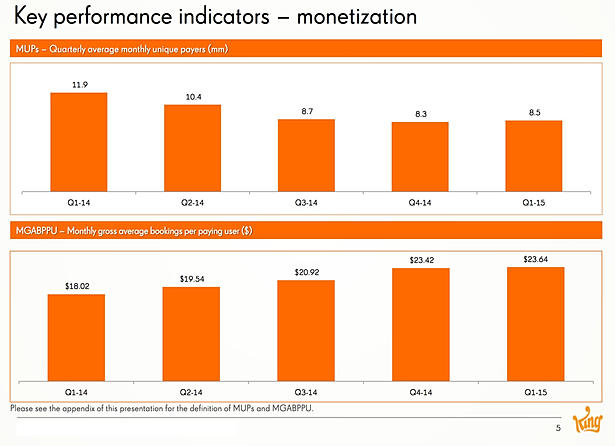 It was encouraging to see monthly unique payers stop declining as evidenced by the above graphic from King’s Q1 investor presentation. Since King currently does not include ads within their games, these might be the most important metrics for investors to look at each quarter. Growth in average booking per paying user slowed, but as long as King can keep adding monthly unique payers. Investors should not be worried especially with the aforementioned new games on the way.

Some might feel King is simply wasting users who are not currently paying, King has recently presented a new option to get items such as free boosters by achieving a certain level in a different game. This should be an immense help when launching new games.

A scenario that could play out is if a user wants more Candy Crush lives without paying, they can download Paradise Bay and finish level 1. Odds are, they keep playing Paradise Bay, and possibly tell a friend about it. Multiply this situation by 364 million monthly unique users and suddenly Paradise Bay is vaulted up to the top charts on the App Store and Google Play giving it exposure to those who do not currently play King games.

The given scenario is a cookie-cutter depiction for the games release, you can see that King certainly has the infrastructure in place. Releasing games in a new category is certainly a risk for King and its investors, but I feel they are staying within their general audience which they know well. It’s not a jump from Candy Crush to Clash of Clans (a war game), instead it’s a new game which should appeal to new and current users.

Ultimately King remains a stock that I rate OVERWEIGHT and remains in the market beating “Our Picks” section here at Young Money Monsters. Q2 doesn’t look to be anything special with increased spending on marketing for new games that won’t positively affect the bottom line yet, but by year end, investors should have a clearer picture on just where King is heading over the long-term.