Take a gander at bullish Q2 plays in biotech from one of the richest men in the business.

Jim Simons is the quant trading genius behind the massive moneymaker Medallion Fund, accessible to merely 300 workers at the quantitative hedge fund Renaissance Technologies- brought into the world by 78 year-old Simons thirty-five years ago. Bringing together the cream of the crop of quant scientists to an elusive hush-hush atmosphere that has garnered around $55 billion in gains in the last 28 years alone, the hedge fund guru’s reputation is now one of legends. How did one of the world’s wealthiest individuals whose firm rarely has to withstand a loss size up biotech stocks Celsion Corporation (NASDAQ:CLSN) and NewLink Genetics Corp (NASDAQ:NLNK) in the second quarter? Before using his math-sharp expertise to make the best trades and reap the most affluent gains, Simons in a past life solved codes for the National Security Agency, the same mental prowess he relies upon to know which stocks are worth the investment and which ones deserve a boot when betting in the market. Now that Simons is later in his life, he cares less about math and more about making money- a passion that has become quite successful for the multi-billionaire. Surrounding himself by physicists, astronomers, and fellow mathematicians, Simons knows how to trick the numbers game between algorithm-minded quick thinking and what he humbly welcomes as good luck, plain and simple.

To follow in the tracks of the trader who collected a whopping $1.7 billion just two years prior, it would seem now is time to buy in the biotech-verse, with Medallion’s activity suggesting full steam ahead for the likes of Celsion and Newlink. Let’s explore if Simons was able to make another financial killing on the Street thanks to these drug makers:

Celsion is a biotech player to watch, as far as Jim Simons is concerned, who initiated a stake of 221,785 shares worth $455,000 in his latest quarter ante. Simons must be somewhere clapping his hands in joy, considering shares were vaulting 301% yesterday and are already flying another almost 9% in pre-market trading today. The reason for Wall Street’s bullish parade? Shareholders are dashing to take a piece of the action on the heels of the oncology drug maker’s promising Phase 1b data read-out in its dose-escalating trial evaluating DNA immunotherapy candidate GEN-1 in advanced stage III and stage IV ovarian cancer.

The trial evaluated 550 patients in a multi-national, double-blind, placebo-controlled trial testing ThermoDox in a one-two punch with radiofrequency ablation (RFA) for primary liver cancer, known as the OPTIMA Study, taking under account recent investigators’ meetings in Thailand and China. Considering primary liver cancer’s rising affliction of incidence throughout China and Asia-Pacific areas, which comprise of roughly three quarters of 850,000 cases diagnosed each year, the region is put on an especially key pedestal when it comes to ThermoDox’s commercial plans and Celsion’s worldwide registration for the treatment.

Investors are still cheering the successful clinical data from Gen-1 plus standard chemotherapy, as no dose limiting toxicities were found and dose-dependent efficacy signals proved to be encouraging, which will bode positively for surgically successful

Celsion chief marketing officer Nicholas Borys offers some context here: “We have completed enrollment of our Phase Ib OVATION Study in newly diagnosed ovarian cancer patients to determine GEN-1’s clinical and biological activity in combination with standard chemotherapy. The remarkable surgical outcomes for all patients completing the prescribed eight weekly treatments of GEN-1 reinforce our belief in the promise of GEN-1’s ability to work safely and effectively in advanced ovarian cancer […] The Advisory Board Meetings held in late September 2017 with our clinical investigators and scientific experts in immuno-oncology provided an important endorsement of our development program for this innovative immunotherapy for first line ovarian cancer.”

Moreove,r the biotech company’s chairman, president, and CEO Michael Tardugno highlights a compelling “de-risked” pivotal Phase III clinical trial at hand for ThermoDox: “With independent confirmation by the NIH of the relationship between RFA heating time and the significant impact that it has on overall survival when combined with ThermoDox®, OPTIMA Study investigators fully recognize the value of the findings from the HEAT Study, reinforcing their interest and support for our highly de-risked, ongoing global Phase III OPTIMA Study.”

Taking the data in enthusiastic stride, Tardugno continues, “The previously announced unanimous recommendation for study continuation by the independent Data Monitoring Committee was based on their review of all available clinical data from 275 patients, and is further evidence of ThermoDox’s recognized potential to provide a new and important first line therapeutic option for patients with primary liver cancer.”

Additionally, according to TipRanks, in the last 12 months, the Street is tossing and turning on this biotech stock, as Jason McCarthy of Maxim rates a Hold on Celsion without listing a price target, and Joseph Pantginis of H.C. Wainwright rates a Buy on the stock with a $1.50 price target. 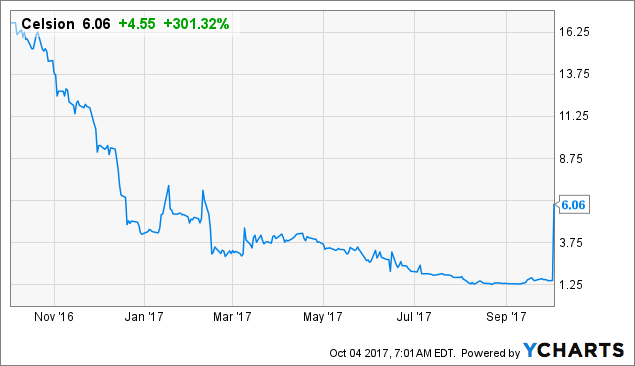 Simons pinpoints compelling opportunity in Newlink, guiding Medallion to take its holding up 167,004 shares worth $1,227,883, lifting the position to 214,904 shares valued at $1,580,000. While Simons is already one of the richest men on earth, no doubt the genius mathematician trader is counting his lucky stars for the boost, as the shares have skyrocketed 349% in value since this savvy second quarter move.

Having already stamped a clinical collaboration deal with AstraZeneca to investigate its IO-based combination of indoximod with durvalumab (Imfinzi), AZN’s anti-PD-L1 monoclonal antibody, coupled with standard of care chemotherapy in metastatic pancreatic cancer, September was a great month for Newlink.

In fact, the firm has just proposed public offering of up to 5 million shares of its common stock priced at $10.25 per share to further fund research for assets like indoximod, appearing to want to capitalize on last month’s results from its ongoing Phase II trial of the IDO inhibitor in advanced melanoma. The mid-stage study data had the Street all riled up, with the stock experiencing a solid 37.5% upturn.

Newlink has thankfully been able to make up for stolen momentum from the summer when its lead drug candidate did not perform as well in a mid-stage breast cancer study along with the bad news that once partner Roche Holdings fled the scene from NLNK’s second-generation IDO inhibitor GDC-0919 after underwhelming efficacy results.

Notably, Cantor analyst Mara Goldstein liked NewLink’s indoximod prospects even when shares were facing some heat after StreetAccount circulated some negative publicity for the firm.

When Newlink had posted an updated data set for the advanced melanoma candidate, Golstein chimed in with a bullish take: “We think the updated data should allow investors to rethink indoximod’s viability as a commercial contender. The limitations of the Phase II study have been well understood and the updated data, in our view, on the 51 patients demonstrated ongoing clinical benefit to that group of patients.”

Assessing Indoximod’s strength of data to be a “main value driver for the shares,” and highlighting potential in the IDO field, the analyst rates an Overweight rating on shares of NLNK with a price target of $26, which implies a 138% increase from where the shares last closed. (To watch Goldstein’s track record, click here)

Wall Street backs Simons’ bullish bite into the biotech player as well as Goldstein’s maintained confidence throughout even short-term stumbles, as TipRanks analytics exhibit NLNK as a Strong Buy. Out of 5 analysts polled by TipRanks in the last 3 months, all 5 are bullish on NewLink stock. With a return potential of nearly 120%, the stock’s consensus target price stands at $24.00.