The hedge fund guru's Q2 moves added ECYT gains to his pocket while saving him greater losses in VRX.

Israel “Izzy” Englander had a modest start before leaping to riches of over $5 billion, a man who started as simply a son of Polish immigrant parents to New York University alum to esteemed manager of his own hedge fund: Millennium Management. When glancing at the billionaire’s biotech roundup of second-quarter plays, was it wise to dial up his position in Endocyte, Inc. (NASDAQ:ECYT), but back down from Valeant Pharmaceuticals Intl Inc (NYSE:VRX)?

When it comes to winning at the Wall Street name of the game, Englander’s is a respected opinion to follow. After all, this is a billionaire hoping to keep trading well into his ’80s. After 28 solid years in the business, Millennium has vaulted from $35 million to a whopping $34.4 billion in total assets, as this is a firm whose strategy prizes reaping high returns for investors. The one time the guru’s firm lost out since the billionaire first founded Millennium was in 2008, seeing just a 3% dip. Last year’s mere 3.4% boost in returns was Millennium’s second bleakest point from 2008- a year that notably still saw gains. Other than that, the NYU grad has built on empire on knowing how to beat the competition, with Millennium consistently outclassing the market, capturing the lion’s share in trading most of the time.

Though Englander’s prospective successor Michael Gelband suddenly resigned last January after being shut down for a greater role in Millennium, has the hedge fund firm managed to scramble in the wake of Gelband’s exit? Let’s take a closer look to see how Millennium’s roll of the dice in the biotech sector paid off for the trader behind the multi-billion dollar fortune:

Englander bit further into Endocyte, adding on 431,878 shares to Millennium’s stake that now has a hook of 690,630 shares in the biotech player worth $1,036,000. Since the billionaire’s bullish quarterly play, these shares have shot up 167% in value, leaving Englander to gleefully add some extra dollars to his assets.

Part of why Englander’s bigger investment in the company turns out to be such a wise investment points to news that broke of the firm’s decision to license its Phase III-ready prostate cancer drug PSMA-617. On the heels of the deal struck with Germany’s ABX GmbH, offering an asset ECYT CEO Mike Sherman praises as “profoundly better than anything we’ve seen” in the indication of metastatic castration-resistant prostate cancer (mCRPC), investors ran to the market to take a slice of the buzz. As a result, Endocyte popped 157% yesterday and continues to rocket to the sky another almost 20% today in pre-market trading.

Cowen analyst Boris Peaker chimed in yesterday with a cautiously optimistic take on the drug maker, noting that this “transformative acquisition” is smart, as it “repositions the company from a disappointing history in folate-receptor targeting to radio-labelled drug (PSMA-617) in prostate cancer.” With the firm making a $12 million upfront payment, the analyst anticipates by the close of 2017, Endocyte will have over $90 million left on its balance sheet.

Though the analyst is not ready to join the bulls just yet on this biotech player, he believes the firm is “well capitalized to reach multiple catalysts in the near future,” maintaining a Market Perform rating on ECYT stock without listing a price target. (To watch Peaker’s track record, click here)

Peaker notes, “Based on initial data and commercial opportunities, Endocyte plans to advance this compound into patients that failed anti-androgens and chemotherapy, which is a growing population given the success of Zytiga and Xtandi. Given the company’s current low valuation, even a small target market could have significant potential upside as investors gain confidence in PSMA-617.” Just take a look at rival German pharma firm Bayer Ag’s labeled drug Xofigo, designed to treat bonemetastatesis in castration resistant prostate cancer, continues the analyst, who points out that this drug alone is already bringing well over $400 million to the table and accelerating at a pace of roughly 30% in growth each year.

Yesterday’s update is crucial, as “The transformative acquisition of PSMA-617 not only transforms the company’s focus but also adds a number of milestones,” cheers Peaker, who asserts: “In our view the most near-term milestone is the regulatory feedback on Lutathera. An approval would significantly derisk other Lu-177 based radiotherapeutics.” In fact, even if Lutathera is slapped with a CRL from the agency, this could nonetheless bode well for the firm, as the analyst opines most important of all will be the challenges should not be tagged to “the Lu-177 payload.”

Moving forward, the drug maker has its next move set on kickstarting a Phase III trial of PSMA-617 in the first half of next year. 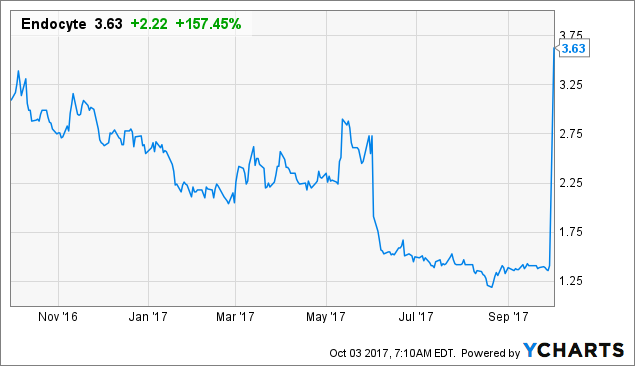 Shying Away from Valeant

Valeant is not looking too hot to Englander, who backtracked to the harsh tune of 896,371 shares in the troubled biotech giant, leaving 896,371 shares worth $13,172,000. Considering these shares have lost 54% of their value since “Izzy” made the sale, perhaps the billionaire made the right retreat here.

How does Englander’s step back measure up against the word of the Street? In one corner, there is BMO analyst Gary Nachman, who surveys Valeant’s situation from the sidelines due to debt shackles inhibiting its operational capacity. However, the analyst appreciates management’s strive for a turnaround, noting divestiture strategy could kickstart some needed earnings gains.

For now, the analyst rates a Market Perform rating on VRX stock with a price target of $16, which implies a 9% upside from where the stock is currently trading. (To watch Nachman’s track record, click here)

Nachman underscores some key takeaways after meeting with the VRX management team: “1) An evolving view on divestitures where it is now more opportunistic vs. mandatory with debt maturities pushed out and increasing confidence in key segments (B&L, GI, dermatology) to drive sufficient EBITDA generation to help delever. 2) A lot more focused on investing behind key businesses to help drive growth. This includes allocating more resources to R&D, with much of the discussion focused on pipeline. CFO’s biggest concern is how to balance the need for investing with the need to generate enough EBITDA to pay down debt. 3) Caution about impact from LOEs [loss of exclusivity. ed.] in 2018, which accounted for ~$1.05bn of annual revenue in 2016 that is expected to go away and could impact 2018 by that amount. VRX plans on giving an updated outlook for LOEs in 2018 on the 3Q17 earnings call.”

Cantor analyst Louise Chen would care to disagree with the bears on the Street, as though he understands it may be too soon to deem the troubled biotech giant’s journey to redemption won just quite yet, he believes Valeant’s comeback is “slowly getting there.”

In a bullish research note, the analyst maintains an Overweight rating on shares of VRX with a price target of $23, which represents a 57% increase from current levels. (To watch Chen’s track record, click here)

The bigger picture for Valeant from Chen’s stance hinges upon its long-term recovery. “We think the Street will want to see the positive trends in 1H17 continue through 3Q17 for the stock to work. This would include strong organic growth for B&L as well as Salix. Improvements to profitability in its dermatology business would be upside, in our view, because expectations are modest for this segment of Valeant’s business. More color on the divestiture of additional assets to pay down debt would be positive as well.”

In the near-term, it looks as if Valeant’s second half of the year could be crucial to restoring investor sentiment. “At our Healthcare Conference, CFO, Paul Herendeen noted that he expects 2H17 progress on earnings, with the progression picking up through the end of the year. He said that he expects ‘…progression through 2017, starting at a lower level and building. A part of that is due to the growth we’re anticipating from our GI franchise in the second half of the year, fueled in part by XIFAXAN and better performance with XIFAXAN, which is coming, by the way, but also, there are other elements in that GI portfolio that are doing well also […]” explains the analyst, who points to assets like ulcerative colitis drug Apriso and injector Relistor, designed to treat adult opioid-induced constipation (OIC) patients as well as those with chronic non-cancer pain and advanced illness, as key assets for the giant.

Meanwhile, with ulcerative colitis drug Uceris anticipated to yield a stronger performance in the back half of 2017, Chen is confident that the biotech player’s dedication to “stabilization” is “already” paying off. Patience is a virtue, and the way Chen assesses Valeant, this timeless, old adage will matter to bullish investors who can bear to wait for Valeant to “meet or beat its guidance and Street expectations over the longer term.” For the analyst, the case of Valeant outclassing the Street is ultimately not a matter of if, but when.

As far as the troubled biotech giant’s verdict on the Street, it is a toss-up among analysts, as TipRanks analytics exhibit VRX as a Hold. Out of 14 analysts polled by TipRanks in the last 3 months, 3 are bullish on Valeant stock, 8 remain sidelined, and 3 are bearish on the stock. With a return potential of nearly 29%, the stock’s consensus target price stands at $18.83.