My readers are well aware that I think the royalty/streaming model is an excellent one that deserves a place in every portfolio.  Its primary appeal is that it is a lower-risk alternative to mining companies as a way to get exposure to cash-flow that is leveraged to precious metals prices.  I’ve been putting together research on Silver Wheaton, which is probably the cheapest of the major royalty/streaming companies with unparalleled exposure to world-class assets owned by major mining companies.

I promise you that part 4 is coming, but I wanted to take a break to write about another company in the space that I like, namely Royal Gold, Inc (NASDAQ:RGLD).  My readers might recall that I first recommended this stock in the low $40’s back in 2013 as the company’s largest stream–a gold stream on Thompson Creek’s Mt. Milligan Project–was about to start generating cash-flow.  Investors were discounting the stock as they were concerned that Royal Gold’s portfolio lacked diversity given the extent to which Mt. Milligan would contribute to the its cash-flow.  I argued that the lack of diversification risk was priced in, and I reiterated this in a royalty-by-royalty breakdown of Royal Gold’s portfolio towards the beginning of 2014.

2014 turned out to be an excellent year for Royal Gold shareholders despite a tepid gold market and weakness amongst the miners.  In fact, in February  of this year the stock was trading around $70/share despite a flat gold price and no major developments in Royal Gold’s portfolio.

What’s going on with Mt. Milligan and Thompson Creek, and how does it impact Royal Gold?

This led me to rescind my enthusiasm for the stock in February: while I was still bullish long-term and not selling my position, I wasn’t a buyer either.  Not only were there no major fundamental improvements to Royal Gold’s portfolio, but it seemed as if the Mt. Milligan risk that had concerned investors in the past was escalating, at least on the surface, since Thompson Creek has been having problems.

Thompson Creek had been forced to shut down its two molybdenum mines due to low prices, and its revenues from Mt. Milligan were sliding on the back of lower copper price (the mine’s primary product).  The stock is also trading as if there is something very wrong with the company, even if Mt. Milligan is a mine with relatively low operating costs.

Now investors who are concerned that Mt. Milligan might shut down (hitting Royal Gold’s largest cash-flow stream) should relax, as this risk is (1) minimal given that this is one of the lowest cost copper/gold mines in the world that has additionally benefited from the weak Canadian Dollar, and (2) largely overstated given that the streaming agreement is in effect even if Thompson Creek doesn’t own the mine (in other words if the company’s creditors were to come to own it through a bankruptcy restructuring).  Net of gold by-products Mt. Milligan is producing copper at $0.48/lb. on an operating basis (probably lower now with CAD weakness and energy-input costs declining) and at ~$1.50/lb. including 2015 capital cost expectations making it a cash-flowing asset.  The company’s problems subsist predominantly with its debt obligations and the fact that care and maintenance at its molybdenum mines has exceeded expectations while revenue from these operations has been lower than expected.

In short Mt. Milligan is a robust asset that can withstand lower metal prices, but its cash-flow stream may not be enough to salvage Thompson Creek.  This comes with risks for Royal Gold shareholders despite the mine’s robustness, as the asset’s new owners could push for a deal restructuring (even if there is no justification economically we could see a push).

As this has been going on Royal Gold shares have fallen back down and this risk is starting to be priced in.  This, along with the lower gold price have given Royal Gold tremendous incentive to diversify away from Mt. Milligan, and it has begun to do so with a couple of recent major stream acquisitions.

Before I discuss these it is worth noting that Royal Gold is being more aggressive in 2015 than at any time since its acquisition of the Mt. Milligan Stream.  But it raised this money in 2012 in a capital raise when the gold price was trading between $1,550-$1,750/oz. and when its share price was ~$100 (it is now half this).  This is a sign of tremendous patience on the part of management, not to mention financial discipline.  We’ve seen–on the other hand–peers Franco Nevada (FNV) and Silver Wheaton (SLW) raise money only to almost immediately spend it (Silver Wheaton actually announced its capital raise at the same time that it announced its new streaming deal).  I thought these were good deals, but at the same time we have to appreciate the foresight of Royal Gold’s management in 2012 to realize the vulnerability in the gold market along with the excessive valuation in its own company’s stock.

Royal Gold bought a stream on New Gold’s Rainy River Project–a development-stage future flagship property that will deliver ~300,000 oz. of gold production per year through 2025 (and a mine life through 2030)–for $175 million in two tranches.

Rainy River is an incredible asset, but the problem is that it is extremely expensive to develop: ~$900 million in total according to the FS (less now that the CAD has weakened).  New Gold has cash and a credit line, but it had been counting on cash-flow generated by higher gold prices to finance this project.  It isn’t worth nitpicking to determine whether New Gold could have made it without Royal Gold’s (or another’s) contribution, but I doubt New Gold’s management was eager to hedge its production at low gold prices (especially since it bought Rainy River before gold fell in mid-2013), and I suspect that Royal Gold’s cash infusion is a much-needed cushion for an indebted and growing gold-miner such as New Gold.

The deal entitles Royal Gold to purchase 6.5% of the gold and 60% of the silver produced at Rainy River.  These figures fall in half when 230,000 oz. of gold and 3.1 million ounces of silver are delivered (in other words when current reserves are depleted).  Royal Gold has to pay 25% of the spot price for this gold and silver.

At current prices this works out to just under $20 million in annual cash-flow with a drop-off in the final years of production.  In essence, this works out to an IRR of 5% at current prices, making this in effect a 5% gold/silver loan with optionality on all the resources not yet included in the mine plan, which is 2.9 million ounces of gold and 10 million ounces of silver (94,000 oz. of gold and 3 million ounces of silver attributable).  Note also that there is tremendous exploration potential in this region, although this is not an immediate priority for New Gold as it develops the mine.  An indication of this exploration potential can be found in New Gold’s purchase of Bayfield Ventures–an exploration company with land adjacent to Rainy River..

Royal Gold’s major purchase, however, was a stream on Barrick’s share of the Pueblo Viejo Project–a massive JV between Barrick and Goldcorp in the Dominican Republic–for $610 million.  Pueblo Viejo produced in excess of 1 million ounces of gold last year, and is 60% owned by Barrick.  The mine has 18 years worth of reserves–9.3 million gold ounces attributable to Barrick, along with 58 million silver ounces attributable to Barrick.

Barrick effectively hedged its gold and silver exposure through Royal Gold with this deal, which is another  “gold loan” that provides the former with some much-needed capital.  Barrick has been very public about wanting to raise capital, and this is one of many capital-raising efforts on Barrick’s part in the past few months.

While the stream is not going to generate a rapid return the Pueblo Viejo Project is the biggest in either Barrick’s or Goldcorp’s portfolios and the second biggest contributor to both companies’ portfolios (Don’t worry!  Royal Gold already owns royalties on both Barrick’s Cortez Project and Goldcorp’s Penasquito Project.).  It also has incredibly low operating costs, which recently came in at just $550/oz. AISC, so there is virtually no possibility that the mine will shut down due to low prices.

We should also note that it appears as if Royal Gold is sacrificing a great deal of its optionality as not only does the size of the stream reduce after the “payback period” (a common feature of recent Royal Gold streaming arrangements) but the cost rises from 30% of spot to 60% of spot–a first for Royal Gold.

I think this reflects the strong likelihood that Barrick will be able to increase the mine’s life  According to Barrick’s Q2 financials the reason 6 million attributable gold ounces and 37 million silver ounces were classified as resources rather than reserves was because there is a shortage of tailings capacity.  Barrick is working on a PEA that would increase the tailings capacity so that these resources could be upgraded to reserves and increase the mine life significantly (probably by more than 50%).  Even at the reduced stream rate and increased cost, and assuming just 500,000 oz. of annual attributable production the cash-flow on these additional ounces exceeds $8 million per year.

Royal Gold has been incredibly aggressive in acquiring quality low-risk cash-flow streams even as gold is largely dismissed as a serious investment.  Regardless, the Royal Gold strategy–both in terms of asset creation, timing, and its emphasis on gold–has been incredibly successful.  In fact Royal Gold has been one of the best long-term value creators of the 21st century having grown its share price over 1,600%, its OCF by 4,400%, and its dividend by 340% (in line with the gold price) 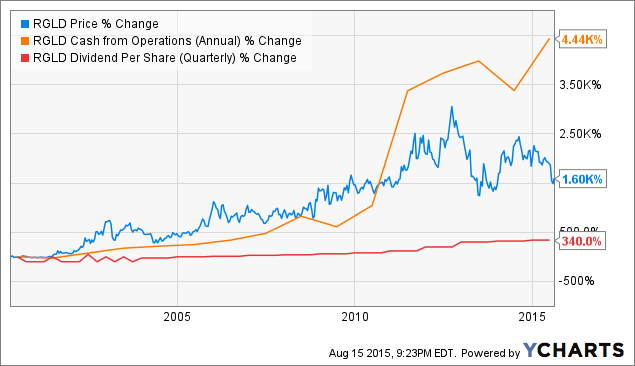 Meanwhile Royal Gold has become relatively inexpensive for the reasons discussed above. 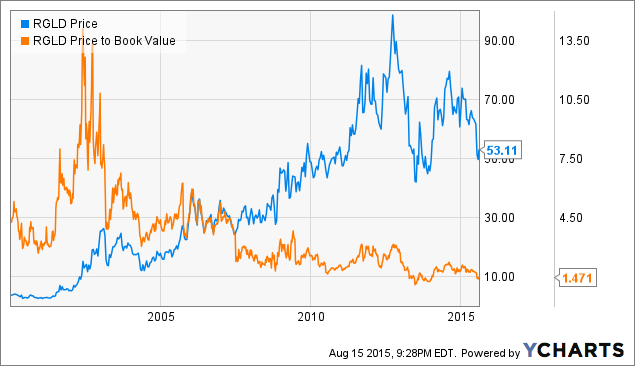 From this chart it is evident that the stock could easily trade 2-3 times higher–assuming a constant BV–in a more favorable environment.  Two such catalysts include a rising gold price (the bear market is almost over) and diversification away from Mt. Milligan.  With respect to the latter we’ve seen the company acquire new streams, and we’re also seeing growth in its cash-flow from Pueblo Viejo and the newest producer in Royal Gold’s portfolio–the Phoenix Project owned an operated by Rubicon Minerals (RBY).  We’re also seeing aggressive exploration at several projects on which Royal Gold owns royalties/streams: two such examples include Barrick’s Cortez Project and Goldcorp’s Penasquito Project.

While Royal Gold has been (and can get) cheaper the risk/reward is especially favorable right now.  We should also not overlook Royal Gold’s prudent capital deployment strategy and note the 2.5 years and $500/oz. swing in the gold price that separate the company’s capital raise and its aggressive deployment as a sign of quality management and a potential signal that we are near a bottom in the gold market.