EconMatters- May 6, 2015, 12:47 PM EDT
SHARE ON:
With the Federal Reserve now indicating that they are “really serious” about raising interest rates, there have come numerous articles and analysis discussing the impact on asset prices. The general thesis is based on averages of historical tendencies as discussed recently by David Rosenberg in his daily commentary:

“Equity bull markets never die simply of old age.  They die of excessive Fed monetary restraint – but the Fed hasn’t even started to raise rates yet.
In the past six decades, the average length of time from the first tightening to the end of the business cycle is 44 months; the median is 35 months; and the lag from the initial rate hike to the end of the bull equity market is 38 months for the average, 40 months for the media.”

So, why fear a Fed rate hike at this point? According to Rosenberg, there are still at least three years left to the current business cycle. Right? Maybe not.
First, averages and medians are great for general analysis but obfuscate the variables of individual cycles. To be sure the last three business cycles (80’s, 90’s and 2000) were extremely long and supported by a massive shift in financial engineering and credit leveraging cycle. The post-Depression recovery and WWII drove the long economic expansion in the 40’s, and the “space race” supported the 60’s. 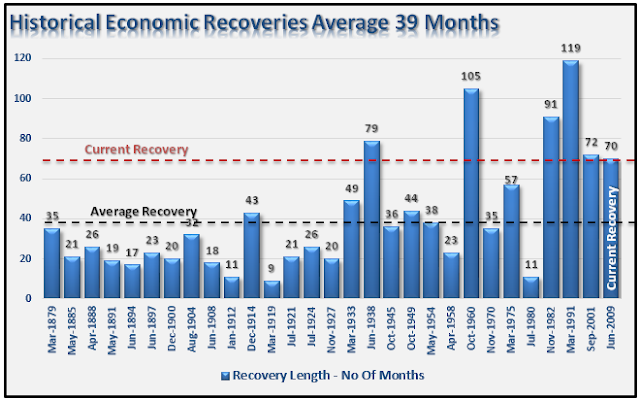 Currently, employment and wage growth is extremely weak, 1-in-4 Americans are on Government subsidies, and the majority of American’s living paycheck-to-paycheck. This is why Central Banks, globally, are aggressively monetizing debt in order to keep growth from stalling out. If the Fed starts hiking rates in September and the next recession doesn’t occur for another three years, as David suggests, this would be the single longest economic expansion in history based on the weakest economic fundamentals.
Secondly, what David’s analysis misses is the level of economic growth at the beginning of interest rate hikes. The Federal Reserve uses monetary policy tools to slow economic growth and ease inflationary pressures by tightening monetary supply. For the last six years, the Federal Reserve has flooded the financial system to boost asset prices in hopes of spurring economic growth and inflation. Outside of inflated asset prices there is little evidence of real economic growth as witnessed by an average annual GDP growth rate of just 1.2% since 2008, which by the way is the lowest in history….ever.
While David is statistically correct in his analysis, it is based on nominal GDP. The chart and table below compares real, inflation-adjusted, GDP to Federal Reserve interest rate levels. The vertical red bars denote the quarter of the first rate hike to beginning of the next rate decrease or onset of a recession. 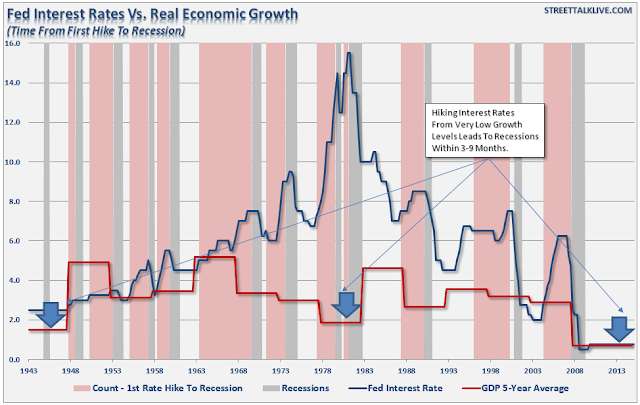 If I look at the underlying data, which dates back to 1943, and calculate both the average and median for the entire span, I find:
However, note the BLUE arrows. There have only been TWO previous points in history where real economic growth was below 2% at the time of the first quarterly rate hike – 1948 and 1980. In 1948, the recession occurred ONE-quarter later and THREE-quarters following the first hike in 1980.
The importance of this reflects the point made previously, the Federal Reserve lifts interest rates to slow economic growth and quell inflationary pressures. There is currently little evidence of inflationary pressures outside of financial asset prices, and economic growth is weak to say the least.
Therefore, rather than lifting rates when average real economic growth was at 3%, the Fed will not start this process at less that half that rate. 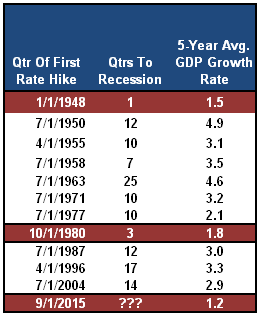 Think about it this way. If it has historically taken 11 quarters to go fall from an economic growth rate of 3% into recession, then it will take just 1/3rd of that time at a rate of 1%, or 3-4 quarters. This is historically consistent with previous economic cycles, as shown in the table to the left, that suggests there is much less wiggle room between the first rate hike and the next recession than currently believed.

Rosenberg’s premise is that if historical averages hold, and since major bear markets in equities coincide with recessions, that the current bull market in equities has three years left to run. But this also may be a bit overly optimistic.
Another David, David Bianco, weighed in on this issue previously. To wit:

“‘Stocks typically sell-off on the first of a series of rate hikes, but the magnitude and duration of the sell-off depend on conditions. During early cycle hikes the initial sell-off was generally small, quickly recovered and further S&P gains came in next three months and longer (like 2004, 1983, 1972). But many sell-offs on late cyclehikes became corrections or even bear markets. Unfortunately, it’s only in hindsight do we know where we are in the cycle.”

While the markets, due to momentum, may ignore the effect of “monetary tightening” in the short-term, the longer-term has been a different story.
As shown in the table below, the bulk of losses in markets are tied to economic recessions.However, there are also other events such as the Crash of 1987, the Asian Contagion, Long-Term Capital Management, and others that led to sharp corrections in the market as well. 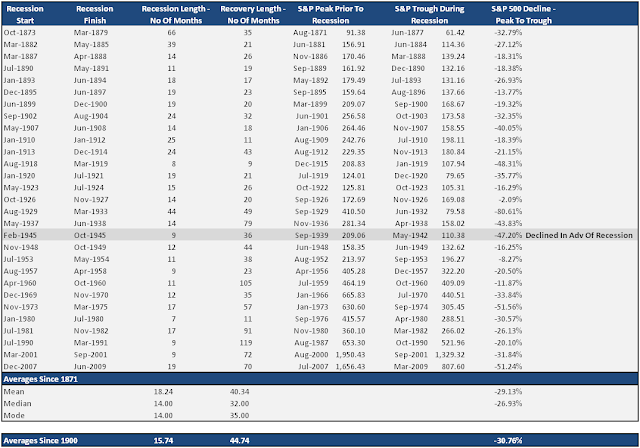 The point is that in the short-term the economy and the markets (due to momentum) canSEEM TO DEFY the laws of gravity as interest rates begin to rise. However, as rates continue to rise they ultimately act as a “brake” on economic activity. Think about the all of the areas that are NEGATIVELY impacted by rising interest rates:

Well, you get the idea. If real economic growth was near historical norms of 3%, then I would completely agree with Mr. Rosenberg. However, at current levels, the window between a rate hike and recession has likely closed rather markedly.
Lastly, it isn’t just recessions that have impacted stocks prices in the past.

“Do Rising Interest Rates Lead To Higher Stock Prices? This claim falls into the category of ‘timing is everything.’ The chart below has been circulated quite a bit to support the “don’t fear rising interest rates” meme. I have annotated the chart to point out the missing pieces. 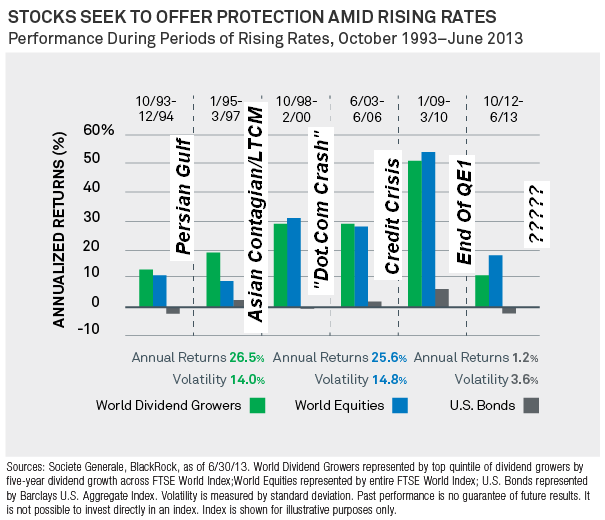 While rising interest rates may not “initially” impact asset prices, it is a far different story to suggest that they won’t. In fact, there have been absolutely ZERO times in history that the Federal Reserve has begun an interest rate hiking campaign that has not eventually led to a negative outcome.
What the majority of analysts fail to address is the “full-cycle” effect from rate hikes. While equities may initially provide a haven from rising interest rates during the first half of the rate cycle, they have been a destructive place to be during the last half.
What is clear from the analysis is that bad things have tended to follow the Federal Reserve’s first interest rate increase. While the markets, and economy, may seem to perform okay during the initial phase of the rate hiking campaign, the eventual negative impact will push most individuals to “panic sell” near the next lows. Emotional mistakes are 50% of the cause as to why investors consistently underperform the markets over a 20-year cycle.
For now the bullish trend is still in place and should be “consciously” honored. However, while it may seem that nothing can stop the markets current rise, it is crucial to remember that it is “only like this, until it is like that.” For those “asleep at the wheel,”there will be a heavy price to pay when the taillights turn red.
Research Report
analyst ratings
blogger opinions
investor sentiment
news sentiment
analyst ratings
insider activity
hedge funds
stats charts
You May Also Like