Is the End Near for Nike Inc (NKE) and Under Armour Inc (UA)?

On the heels of Game 1 of the NBA Finals, you might be thinking both Nike Inc (NYSE:NKE) and Under Armour Inc (NYSE:UA) are in for a payday, regardless of the outcome of the series. The finals feature the faces of Nike and Under Armour in Lebron James and Stephen Curry, respectively. Both players have helped lift sales for their respective companies in the past few years.

However, news from both Nike and Under Armour this week indicated that their high profile athletes won’t be enough to save sales this quarter. Earlier this week, Under Armour released a sales warning thanks to the Sports Authority’s bankruptcy. This note largely confused investors but was enough to send the stock down nearly 5% yesterday. Nike, on the other hand, was downgraded yesterday by Morgan Stanley to a neutral rating. Together, this reflects a high probability that both Nike and Under Armour fall short on earnings this quarter. 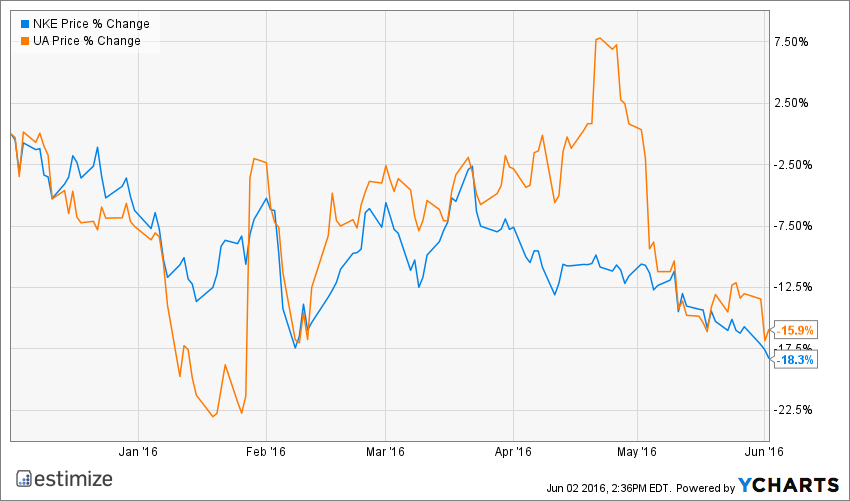 Nike has traditionally been a stalwart in the footwear and athletic apparel industry. With nearly a $100 billion valuation, the company has put up double digit gains quarter after quarter. The swoosh was relatively unopposed, particularly in the domestic market, until the past few years. Under Armour’s emergence has changed the landscape in the industry. Under Armour currently has the NBA’s most popular player, Stephen Curry, endorsing its portfolio. What’s more important is the price point. The Curry 2 is currently retailing for $130 while any premier Nike basketball shoes can goes for more than $200.

Internationally, Adidas still poses a threat to Nike. With the Euros and Olympics on deck this summer sales for Nike should benefit, but could fall short of initial expectations given Adidas’s resurgence. Meanwhile, Nike must also confront an apparel slow down. This quarter, core apparel sales have slowed 1% due to a shift to online shopping, weak consumer spending and excess inventory. Nike currently enforces that its third party retailers don’t discount its products over 20% which has resulted in an over accumulation of inventory. 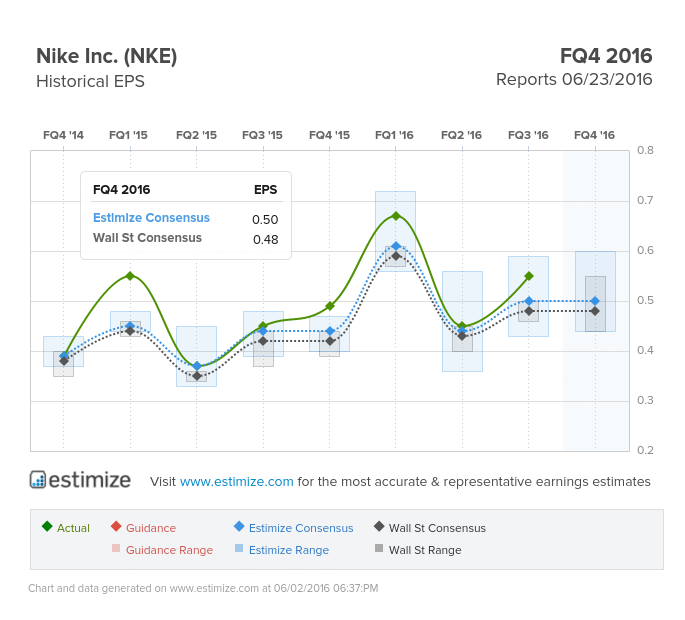 Earnings this quarter are already looking gloomy for Nike. The Estimize consensus is calling for earnings per share of 50 cents on $8.3 billion in revenue. Compared to a year earlier this represents a 4% increase on the bottom and 7% on the top. This is a significant drop off from past quarter which delivered double digit gains. Estimates are also dropping rapidly and should continue to fall in the run up to its fourth quarter earnings.

Under Armour, on the other hand, seems to be falling from investor’s good graces. After bursting onto the scene 5 years ago, the company has lately been stuck in mediocrity. Earlier this week, it issued a statement that the Sports Authority’s bankruptcy would severely impact fiscal 2016 revenue. Sports Authority’s decision to liquidate rather than restructure caused Under Armour to shift its full year guidance down $75 million to $4.92 billion. According to management, Sports Authority accounted for $120 million in revenue, some of which it was able to write down given the bankruptcy. Shares are down nearly 5% since the news broke with potential to fall even further. 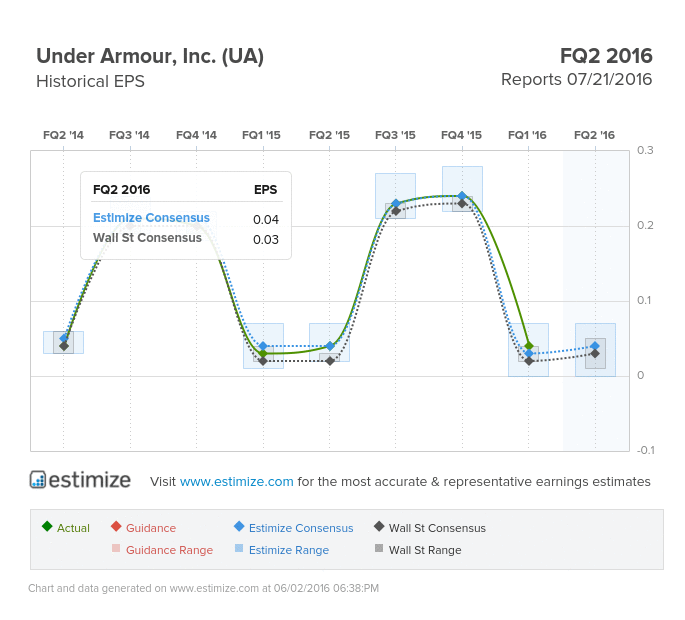 It’s no secret that earnings will be lower for Q2 and for the rest of fiscal 2016. The Estimize consensus is calling for earning pers share of 4 cents on $1 billion in revenue, right in line with Wall Street. Earnings per share estimates have been cut by 33% in the last month and should continue to drop further given the recent revelations. Under Armour is still projecting double digit growth on the top and bottom line but significantly slower than previous quarters.

The footwear and athletic apparel industry, which has been one of the hottest industries, is hitting its first major obstacle. Both Nike and Under Armour suffered major setbacks this week that will impact earnings for the remainder of the year.