Is LinkedIn Corp Mania Over After 20% Plunge? (LNKD)

It’s tough predicting the end to manias. Yesterday I pondered a 21% plunge in extended hours trading in LinkedIn Corp (NYSE:LNKD). Is the mania over?

LinkedIn Corp.’s shares plunged as much as 27 percent after the company delivered quarterly revenue that missed analysts’ estimates for the first time, shaking confidence in a historically stable business plan.

The professional-networking website also forecast sales that missed projections for the second quarter and cut its guidance for annual revenue, citing the strong U.S. dollar and slower-than-predicted growth.

“This is an extraordinary miss for a company that has by and large avoided any major blowups since going public,” said Paul Sweeney, an analyst at Bloomberg Intelligence.

Since its debut as a public company in 2011, LinkedIn has steadily surpassed estimates for sales until now. The company, with its mix of job-related tools for consumers and businesses, has been expanding its offerings every year under Chief Executive Officer Jeff Weiner, through acquisitions and rapid hiring. Those efforts aren’t translating to as much revenue growth as expected, Sweeney said.

Second-quarter revenue will be $670 million to $675 million, the company said Thursday. Analysts had predicted $718.3 million, on average, according to data compiled by Bloomberg. LinkedIn also trimmed its forecast for annual revenue to $2.9 billion, from $2.93 billion to $2.95 billion.

The company’s shares fell 21 percent in extended trading, after dropping 2 percent to close at $252.13. The stock had gained 9.7 percent this year. 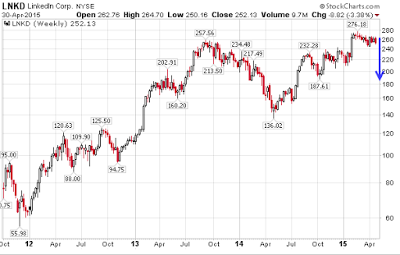 LinkedIn blamed the plunge on strength in the US dollar. It generates 39% of its revenue outside the US.

For the trailing 12 months, LinkedIn lost money. The loss widened from 11 cents a share to 34 cents a share. It has no PE because it has no profit.

Prior to this plunge, LinkedIn had a market cap of $31.74 Billion.

I see no value in paying anything for such services. If others come to the same conclusion, I wonder if LinkedIn will ever turn much of a profit.

Every week or so I get an offer to try LinkedIn premium services for free. I never respond to these offers and never will.

My personal policy on LinkedIn is to accept every invite I get. Why? Because it cannot possibly hurt. Perhaps someday it helps. Perhaps not. I have a an amazingly eclectic LinkedIn group. But to communicate with anyone, you have to do it through LinkedIn unless you get their email address.

That’s part of the model, but it also sucks.

I have two profiles, one by accident. I set them up under two different email addresses, not realizing I already had a profile. I wanted to merge them, but the procedure was absurd. I do not want to delete and do a mass invite.

So, if you sent me an invite, and I did not respond, it is likely because you found my inactive profile to which I do not even know my password. Try again in a week or so, and hopefully I will have this fixed.

Is the mania over? It’s hard to say.

The LinkedIn business model may very well be viable, but not if it loses money, and it is struggling to make any.

Can it make enough to support a $32 billion market cap? I highly doubt it. I expect to see this company trading once again at $50. Heck, $10 would not surprise me in the least.

The thing is, stocks generally peak on good news not bad. So maybe more mania is on the way. Don’t count on it.