A recent report from GoldCore hysterically asks the question:  is “JPMorgan Chase & Co (NYSE:JPM) cornering the silver market”? The use of the word “hysterical” is necessary here, as any sober consideration of this question would result in nothing but scoffs of derision. 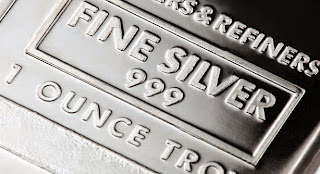 What is interesting in that article is that the writer actually compares his hypothesis that JPMorgan is “cornering” the silver market (today) with a real, documented attempt to do so: the infamous Hunt Brothers episode of 1980. The point here is that any comparison to that episode makes it obvious that the writer’s hypothesis is not simply false, but absurd.
First let’s review what actually happened in the silver market, when the Hunt Brothers (along with some Arab investors) attempted to buy-up all available silver, starting in 1979. Before reviewing the facts, and for readers with limited market savvy, an obvious question: why would any person/entity want to “corner” the silver market (or any other market)? Answer: to make lots and lots of money.
When the Hunt Brothers began buying-up silver in 1979; the price of silver was at roughly $5/oz (USD). At the peak of their accumulation; the Hunt Brothers had roughly 200 million ounces of silver, and the price had increased ten-fold, all the way to $50/oz. And this ten-fold increase in price came even though the Hunt Brothers’ total holdings never reached 20% of global inventories.
It is here where the numbers supplied by GoldCore get interesting (if still laughable). We’re told that JPMorgan has (over a short period of time) supposedly accumulated 350 million ounces of silver. This leads to two, obvious questions, for all readers who dwell in the real world. Where did they get all this silver? Why hasn’t the price of silver spiked by at least a factor of ten, given that JPMorgan’s supposed “silver hoard” is nearly 90% larger than that of the Hunt Brothers?
These questions become even more to the point when we look at a familiar chart of global silver inventories: 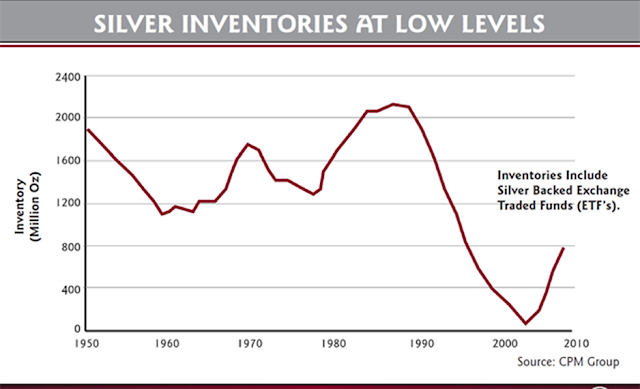