Is Housing Recovery For Real? Lack Of Data May Suggest Otherwise

There are probably quite a few of you reading this article who do not remember the old“Memorex” commercials when “cassette tapes” were THE recording technology of the day.
It was Tuesday release of the housing starts data that reminded me of that slogan – “Is it live, or is it Memorex?”
In July of 2013, I asked the question of whether housing was really recovering or not?  There has been much hoped placed on the “housing recovery story” over the last few years as it relates to the economy. As each year passes, the hopes of a stronger housing driven economic recovery has failed to emerge. Furthermore, as with many of the economic reports released as of late, there is a widening divergence between the statistical headlines and the underlying economic reality.
This is not a trivial matter as real estate is the bedrock on which the economic foundation is built. As much as home ownership is a symbol of achievement of the “American Dream,” it is also a large multiplier effect throughout the economy as a whole.
While residential investment represents a small portion of gross domestic product (GDP), housing is perhaps one of the most cyclical sectors of the economy and tends to lead economic swings by months to years. As such, understanding what is occurring in the housing sector provides valuable insight into future economic trends.

The problem with most of the analysis, is that it is based on the transactional side of housing which only represents what is happening at the “margin.”  The economic importance of housing is much more than just the relatively few number of individuals, as compared to the total population, that are actively seeking to buy, rent or sell a home each month.
To understand what is happening in terms of “housing,” we must analyze the “housing market” as a whole rather than what is just happening at the fringes. For this analysis, we can use the data published by the U.S. Census Bureau.

In an economy that is roughly 70% driven by consumption, it is grossly important that the working age population is, well, working.  More importantly, as discussed before,

To present some context for the following analysis, we must first have some basis from which to work from. Our baseline for this analysis will be the number of total housing units which, as of Q1-2015, was 133,575,000 units. The chart below shows the historical progression of the seasonally adjusted number of housing units in the United States.
(Note: Importantly, despite data released by the marketing arms of the real estate which suggests that millions of units are being built each year. The reality is that from Q1 of 2009 until Q1 of 2015, there has been a TOTAL increase of just 2,574,000 units. This equates to anaverage increase of just 429,000 units per year.) 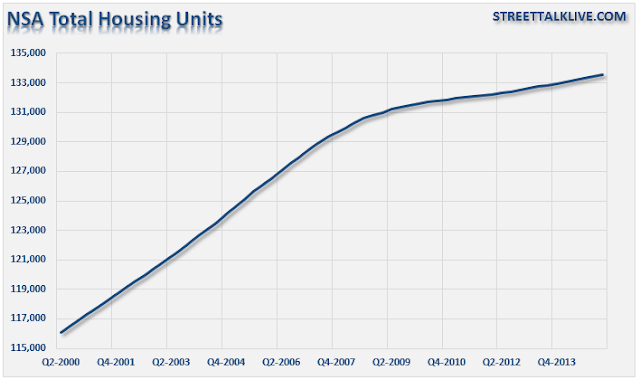 As an example, yesterday’s release of “new home starts” showed that 1,135,000 homes were started on an annualized basis in April of 2015. Since this is an annualized number, we must divide it by 12 months to obtain the estimated seasonally adjusted number of starts in April was actually just 94,583. This number of starts represents just 0.07% of the total number of housing units available. This is what I mean by “activity at the margin.”When put into this context the “new home starts” report doesn’t seem nearly as exciting.
What about sales of existing homes? Existing home sales were 5,190,000 on an annualized basis in March (the last reported month) which equates to 432,500 homes per month. That is just 0.3% the total homes available to be sold in the market.
This activity at “the margin” is obfuscated by the seasonal adjustment and annualization of the data in the monthly reports. However, by analyzing the Census Bureau data of how many homes are sitting vacant, owner occupied or being rented, we can obtain a much clearer picture of the real strength of the economy, and how much of a potential “tailwind”there might be.

If a real housing recovery were underway, the vacancy rate would be falling sharply rather than hovering only 0.5% below it’s all-time peak levels.

Another sign that a “real” housing recovery was underway would be an increase in actual home ownership. The chart below shows the number of owner occupied houses as a percentage of the total number of housing units available. See the problem here?

Despite the Federal Reserve flooding the system with liquidity, suppressing interest rates and the current Administration’s efforts to bailout banks and homeowners, owner occupied housing has continued a decline. This says much about the real strength of the “employment and wage growth” in America currently.

The reality is that there has been very little recovery in housing. With six years of economic recovery now in the rear view mirror, it is clear that the average American is not recovering as evidenced by the lowest level of home ownership since 1980.

At 63.7%, the current level of home ownership shows the lack of “true” household formation which is a detraction from longer-term economic growth. The weak rate of growth and widening wealth gap certainly explain the fall in homeownership rates and the lowest level of birthrates on record.
However, the recent reports of sales, starts, permits, and completions have all certainly improved in recent months. Those transactions must be showing up somewhere, right?

While the Federal Reserve, along with the current Administration, have tried a litany of programs to jump start the housing market nothing has worked as well as the “REO to Rent” program. With Fannie Mae/Freddie Mac, and the banks loaded with delinquent and vacant properties, the idea was to sell huge blocks of properties to institutional investors to be put out as rentals. This worked very well.  The chart below shows the number of homes that are renter occupied versus the seasonally adjusted homeownership rate.

Do you see the potential problem here? Speculators have flooded the market with a majority of the properties being paid for in cash and then turned into rentals. This activity drives the prices of homes higher, reduces inventory and increases rental rates which prices “first-time homebuyers” out of the market. The problem is that when the herd of speculative buyers turn into mass sellers – there will not be a large enough pool of qualified buyers to absorb the inventory that will lead to a sharp reversion in prices.
Maybe this is why the banks have spent billions lobbying Congress to remove the regulations put in place after the last housing bubble which required banks to have “skin in the game.” By removing restrictions, banks can now go back to providing mortgages to unqualified buyers, pool them and sell them off to unwitting investors. Haven’t we watched this movie before?
While the surge in housing activity since the financial crisis is welcome, it should not be forgotten that it has taken massive bailouts, stimulus and financial supports to induce such relatively small amounts of activity.

The mistake, however, as I addressed before:

“I recently penned an article showing the $30 trillion, and counting, that has been thrown at the economy, and financial system, to keep it afloat over the last 4 years. Of that, trillions of dollars have been directly focused at the housing markets including HAMP, HARP, mortgage write-downs, delayed foreclosures, government backed settlements of ‘fraud-closure’ issues, debt forgiveness and direct buying of mortgage bonds by the Fed to drive refinancing and purchase rates lower. Of course, the Fed has also maintained its ZIRP (zero interest rate policy) during this same period with a pledge to keep it there until at least 2015.
The point here is that while the housing market has recovered – the media should be asking ‘Is that all the recovery there is?’ More importantly, why are economists, and analysts, not asking the question of ‘What happens to the housing market when the various support programs end?’ With 30-year mortgage rates below 4% we should be in the middle of the next housing bubble.”

The housing recovery is ultimately a story of the “real” employment situation. With roughly a quarter of the home buying cohort unemployed, living at home with their parents or saddled with debt, the option to “buy” simply is not available. The rest of that group are employed but at the lower end of the pay scale which pushes them to rent due to budgetary considerations and an inability to qualify for a mortgage.
As I stated previously, the optimism over the housing recovery has gotten well ahead of the underlying fundamentals. While the belief was that the Government, and Fed’s, interventions would ignite the housing market creating a self-perpetuating recovery in the economy – it did not turn out that way. Instead, it led to a speculative rush into buying rental properties creating a temporary, and artificial, inventory suppression.
The rising risk to the housing recovery story lies in the Fed’s ability to continue to keep interest rates suppressed. It is important to remember that individuals “buy payments”rather than houses. With each tick higher in mortgage rates so goes the monthly mortgage payment. With wages remaining suppressed, 1 out of 3 Americans no longer counted as part of the work force or drawing on a Federal subsidy, the pool of potential buyers remains tightly constrained.
While there are many hopes pinned on the housing recovery as a “driver” of economic growth in 2015 and beyond – the lack of recovery in the home ownership data suggests otherwise.
Research Report
analyst ratings
blogger opinions
investor sentiment
news sentiment
analyst ratings
insider activity
hedge funds
stats charts
You May Also Like