Electronic payment transaction processing company, VeriFone Systems (NYSE:PAY), is set to report earnings after the closing bell. Following a period of falling profits and stalled revenue, VeriFone has gotten its earnings power back into gear and has consistently outperformed Wall Street’s expectations.

One year ago the payment systems producer turned the corner on its sliding revenue. Earnings growth followed suit 6 months later, crossing into positive territory. In the past 2 periods earnings per share have increased by 67% and 63% respectively on a year over year basis.

One reason VeriFone’s earnings are suddenly on the rise is improving margins. A shift to more profitable businesses in the past year gave the company’s Q4 operating margin a boost from 13.2% in FQ4 2013 to 13.9% last quarter.

More broadly speaking VeriFone’s success can be attributed to increasingly widespread credit card usage and a series of strategic acquisitions which have panned out well. Investors have seen VeriFone demonstrate its ability to outperform the Wall Street consensus and expectations are accordingly high this afternoon. Contributing analysts on Estimize expect VeriFone to report 44 cents in earnings per share, that’s 3 cents better than the Wall Street consensus of 41 cents in EPS. 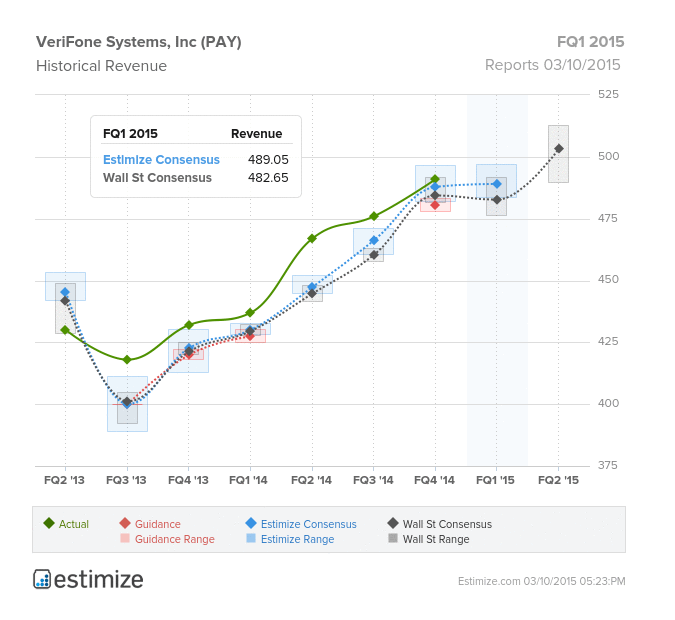 In the past 5 quarters VeriFone has outperformed estimates from both Estimize and Wall Street on the top and bottom line. The point-of-sale device maker has beaten Wall Street’s estimates by an average of 3 cents per share over that timeframe. Estimize contributors are setting the bar at the status quo, looking for another moderate beat after the close.

According to TipRanks.com, which measures analysts’ and bloggers’ success rate based on how their calls perform, Blogger Estimize has a total average return of 7.2% and a 62% success rate. Estimize is Ranked #850 out of 4280 Bloggers