An Interesting Shift of the U.S. Job Market and Economy

Growth in U.S. non-farm payrolls was a bit softer in August than the booming employment growth posted in the prior two months. There has been much focus over the past week on this August payroll growth slowdown and what it means for the timing of the next Federal Reserve (Fed) interest rate hike. My take: The weaker-than-expected growth makes more sense alongside today’s corporate profits and economic fundamentals than the unsustainable hot pace of prior months, and the deceleration does make a December policy rate hike more probable than a September one.

The changing composition of the labor market was evident in the August jobs report, which showed the longstanding trend continues apace. See the chart below. 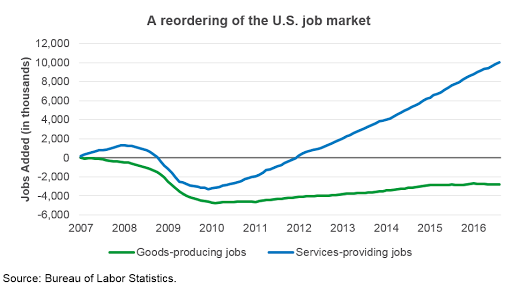 We saw a 24,000 decline in goods-producing jobs last month, while services gained 150,000 (the government sector made up the difference). In other words, we are not only watching a labor market heal from a massive financial crisis and recession (nearly eight million jobs have been created over the past three years), we are also witnessing a reordering of the labor market due to the impact of technological change.

The shift is reflective of a broader transition of the U.S. economy from a goods-producing engine to a service sector and technology powerhouse. Consumers today are increasingly eschewing goods purchases in favor of services and experiential consumption, one factor behind the shifting employment landscape. Growth in services spending has ballooned rapidly since around 1980, while goods purchasing has grown more modestly. In contrast, four decades ago, personal consumption expenditures (PCE) were divided roughly evenly between income spent on physical goods and that spent on services.

Bottom line: The August jobs report isn’t likely to majorly sway the Fed from its path toward interest rate normalization, but it’s more important to focus on the bigger-picture economic shifts evident in the data.