I’m Raising The Caution Flag On The U.S. Economy

Analysts and investors cheered when the U.S. economy grew 5% in Q3'14. Finally, it seemed, the pace of economic growth had hit "escape velocity" – a level at which the macro level of economic growth no longer required fiscal or monetary stimulus. But with a headline number of 2.2% in Q2'14, the overall GDP growth quickly returned to its previous slower levels. And since the first of the year, several economic numbers have been disappointing. While no one is arguing a recession is on the way, there is just enough negativity in the numbers to raise concerns.

Three concerning developments were buried in the fourth-quarter GDP report. First, business-fixed investment only increased .6% from the previous quarter. Granted, this occurred after two consecutive quarters of growth above 11%, meaning the latest number could simply be a slowdown from the faster pace set earlier in the year. The sharpness of the slowdown, however, raises a potential red flag. Second, exports of goods only increased 2.5%, whereas in the previous two quarters, they were up 14.3% and 7.5%, respectively. The higher dollar is clearly the reason for this development. Third, total government expenditures decreased 1.9%, with a sharp 7.3% drop in federal spending. This pattern of weak fourth-quarter federal government spending reports has occurred over the last two years, meaning this could simply be a continuation of that pattern.

Weakness in several economic statistics has continued into the first quarter, starting with industrial production: 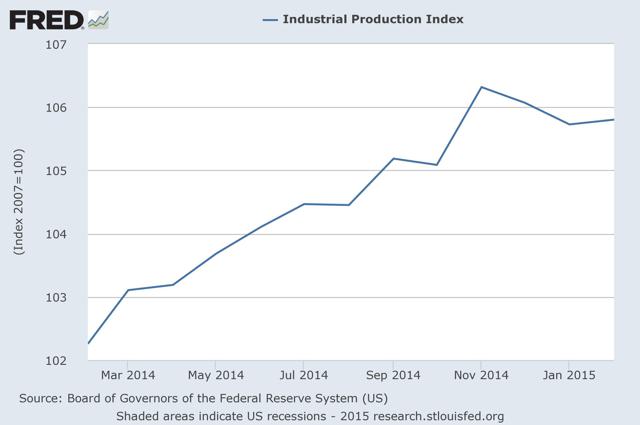 The following table from the latest report provides more detail: 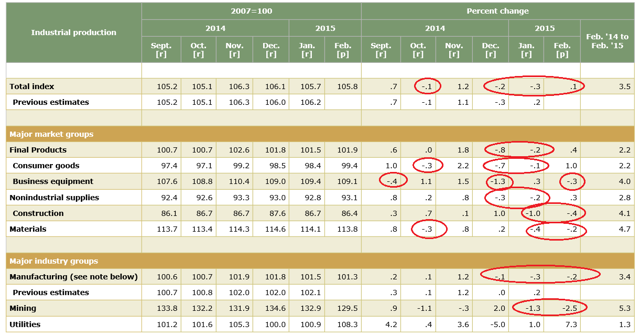 Overall IP decreased in two of the last three months. And the increase in January was only .1% – hardly a number to get excited about. Sub-categories have broadly declined: consumer products, business equipment, construction and materials are all lower. If the overall drop was caused by a single event (like the drop in oil prices), it wouldn't be as concerning. But the widespread decline raises uncomfortable questions about the strength of IP.

Next, consider the weakness in durable goods orders: 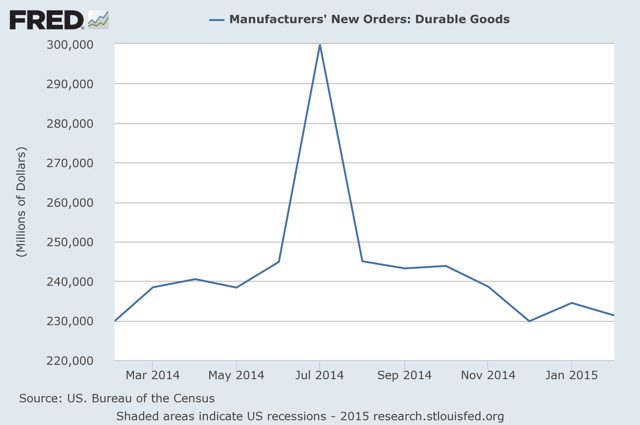 A large transportation order caused the huge spike in July. Since then, orders have been declining. One could argue they are still cooling down from the July increase. If this were September or even October, that argument would make more sense. However, six months later, it loses salience.

Corporate earnings were down in Q4'14: 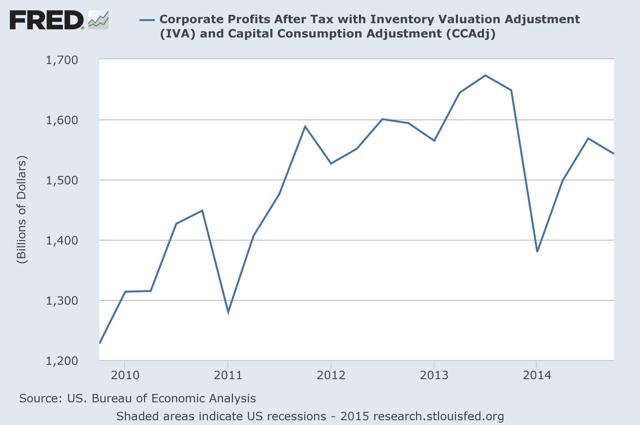 In fact, corporate profits dropped sharply in Q1'14, rose for the next few quarters, falling again in Q4'14. Their overall level is still lower than their mid-2013 high. And first-quarter projections aren't looking any better:

Analysts predict that profits for the S&P 500 companies will be down 4.6% from the first quarter of 2014, according to data from FactSet Research. This would be the first time profits have fallen since the third quarter of 2012.

And finally, consider the large drop in new export orders: 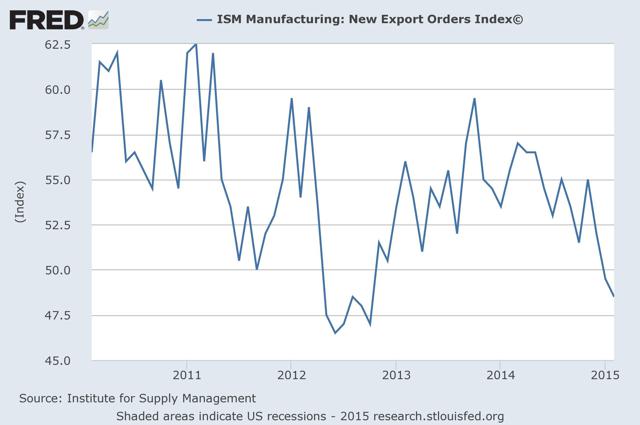 This number peaked at the end of 2013, and has been slowly moving lower. The latest reading was below 50, indicating a contraction in this sub-index. The strong dollar is the obvious cause of this contraction.

One of the more difficult aspects of economic analysis is that final conclusions are often based on gradations of data. For example, one negative data point in a sea of positive indicators can be written off as statistical noise. But as the number of negative points grows, an analyst's ability to dismiss them as mere flies in the ointment decreases. The U.S. data is approaching this second level. Although it hasn't reached the point where recessionary calls are warranted, the data is just concerning enough to raise the caution flag, especially as we move forward into earnings season.