How Many Ways A Greek Default?

What was once anathema has become conventional wisdom, and lately the only question when discussing the fate of Greece is not if but when it will default. Actually, there is another question: how? Because as the following UBS flow chart shows, when it comes to the matter of picking an obligation on which to not make a payment, Greece has a truly 5 star menu selection. 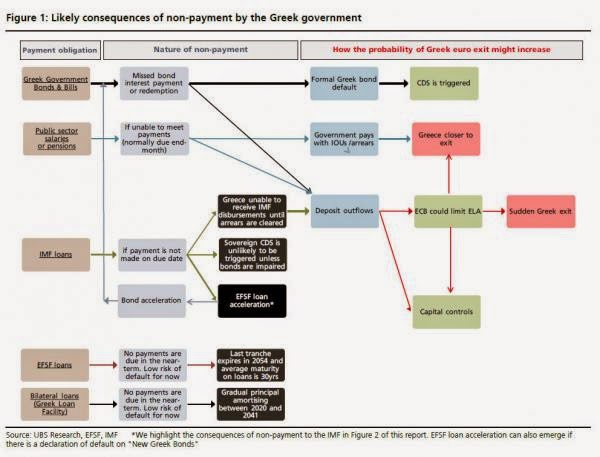 Ths is what UBS says:
We do not believe that Greece will leave the euro in our base case scenario. However, were it to happen, we think it would probably do so via one of two main routes:
(1) The fast route: A rapid deposit withdrawal from the banking system, if the Eurosystem refused to finance it through expansion of the ELA facility. The government would then need to refinance (and probably recapitalise) the banking system by creating a new currency to do so. However, this could probably be slowed with the imposition of capital controls limiting deposit withdrawal.
(2) The slow(er) route: The government, running out of funds, could substitute IOUs for euros in some of its payments. Starting with payments to suppliers (including for pharmaceuticals, as in 2011), and then – in theory – progressing on to public sector salaries and pensions over time. As current Greek debt obligations are not valued at their face value by the bond market, nor would these notes be, meaning that their purchasing power would likely be lower than that of the euro. In this way, the parallel currency would already be devalued.
The more of these notes that were issued, the greater the need would be for the banking system to clear payments in them. The need would also increase for businesses and citizens to use them to pay taxes. As this continued, it would be likely that more euros would leak out of the Greek banking system and the economy would rely on the new currency to a greater extent.
Nominally, Greece could (in theory, and just conceivably) remain in the euro under these circumstances, but there would come a point in this process at which it had in a practical sense already left.
Below we look at the likely impact of impairment of some of the Greek government’s obligations, were any to take place.
IMF loans
The IMF has a “timetable of remedial measures” for overdue payments which we reproduce in the annex at the bottom of this note. As the cross-default clause in the bond documentation only refers to impairment of other securities, we doubt that non-payment to the IMF would accelerate bond repayments.

However, it is possible that non-payment to the IMF causes an acceleration of amounts due to the EFSF, which in turn could accelerate repayment of bonds if as would seem likely they were also left unpaid.
According to the “Master Financial Assistance Facility Agreement” between the EFSF and Greece, the EFSF may “declare the aggregate principal amount of any or all Financial Assistance made and outstanding… immediately due and payable, together with accrued interest” if (among other clauses) “the Beneficiary Member State does not make timely repurchases from the IMF in relation to the IMF Arrangement of any outstanding purchases… or has overdue charges on outstanding purchases”.
It is important to note that the EFSF also states that it “may, but is not obliged to, exercise its rights under this Clause”.
Were the EFSF to exercise this right, it is likely that bond repayments would also be accelerated. The documentation for the PSI bonds (those issued in exchange in the 2012 restructuring) cites as an event of default if amounts due to the EFSF “are declared to be due and payable prior to their scheduled maturity”. However, it should be noted that this clause does not appear in the prospectuses for the 2017 and 2019 bonds issued by the Greek government last year.
Government bonds and bills
The normal consequences of a failure to make a payment on a sovereign bond or bill are relatively well-known: the bonds enter into default and in due course CDS is triggered after a decision of the ISDA determinations committee. Additionally, in the case of non-payment on the “New Greek Bonds” (PSI bonds), the EFSF could decide to accelerate amounts due to it as with non-payment to the IMF (see above).
It is possible (though for a variety of reasons very unlikely) that an attempt is made to restructure privately-held bonds at some point in the near-medium term. However, no bonds have been issued to the private sector under Greek law since before the 2012 restructuring, meaning that any restructuring within the law would have to take place via investor votes as per collective action clauses. As the investor base is mostly composed of hedge funds and foreign asset managers, it is reasonable to infer that such a restructuring attempt would be unsuccessful.
Bilateral and EFSF loans
No interest or principal payments are due on the loans made in the first and second Greek aid programmes until 2020. As a result, and unless the Greek government were formally to repudiate its debt obligations under these programmes, impairment would seem unlikely.
* * *
So now that you know your options Greece, choose. And remember: your last check should always bounce, or at least be written in a currency that will soon no longer exist.
Research Report
analyst ratings
blogger opinions
investor sentiment
news sentiment
analyst ratings
insider activity
hedge funds
stats charts
You May Also Like