Too many investors fixate on short-term price movements. The long-term investing view is what really matters.

Short-term thinking from the masses can create opportunities for long-term investors.  This article takes a look at just such an opportunity.

With regard to getting energy resources to where they need to go, Enbridge is a vital component. The company operates the world’s largest crude oil and liquids pipeline system and also operates Canada’s largest natural gas distribution company.

Let’s think about natural gas distribution as an example related to the notion above. Perhaps someday fossil fuels will be replaced but I’d contend that this day is not tomorrow.

In the interim, of the available options, natural gas can often be cleaner, cheaper, safer and more efficient to transport. And this isn’t just theoretical, for the first time ever natural gas recently overtook coal as the leading supplier of power generation in the U.S.

A decade ago coal generated half of the power supply as compared to just under 20% for natural gas. Today the numbers are closer to a third for each source.  This is something that I’d anticipate continuing rather than stalling.

Naturally it’s not going to happen linearly – there’s always an ebb and flow to the process. However, it seems more likely that we’ll be using more natural gas in the coming decade as compared to the last.

This sort of thing sets up well for the companies that happen to transporting the energy source. It’s not like you or I can go out and set up a pipeline; there’s immense regulatory and logistics involved. The assets are well entrenched.

Of course resource pricing matters – not enough supply or demand results in lower volumes being passed through pipelines. However, the pipelines do have a bit of insulation in that they act as a necessary middleman; oft described as “toll road” like business models.

This general concept – long-term benefits coupled with some short-term uncertainty – lends itself to a reasonable investment thesis. As a large and well-entrenched corporation in the space, Enbridge stands to collect its fair share of the economic rents that come about.

Of course you don’t need to take my word for it. Enbridge lays out a similar thesis in its “why invest” section of the company’s website, detailing four areas in particular.

The first thing that Enbridge notes is that the company and security have been able to generate superior returns as compared to its benchmarks as a result of the company’s “visible growth, low-risk business model and growing dividends.” 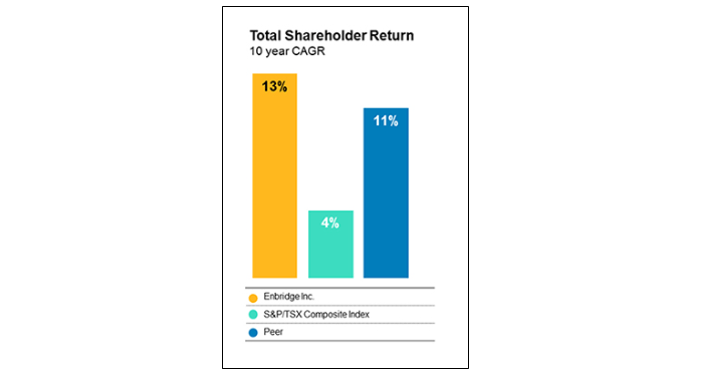 Granted past success in no way guarantees future success, but Enbridge goes on to demonstrate why those same factors that allowed for past success could lead the way once more in the future.

From 2015 through 2019 Enbridge is anticipating putting $26 billion to work to continue to grow its business.

As the business tends to be capital intensive (think heavy depreciation expense) Enbridge prefers to use “Available Cash Flow From Operations” (ACFFO) as a metric of its success. Here Enbridge anticipates its growth projects leading to very strong growth on this end, with the per share dividend payment following suit.

The company’s confidence in its projections is a result of the reliable business model. If you’re a supplier of natural gas, as an example, you are quite concerned with the going rate for your product. Likewise, if you’re consistently purchasing the resource, the price is going to important. For transporters this isn’t necessarily the case to the same degree.

The price is important because you want a happy medium that generates a healthy flow of the resource. However, the insulation from price fluctuations is much greater at this stage. For Enbridge less than 5% of the business is subject to direct commodity exposure, while 95% of the cash flow is based on strong, long-term commercial constructs.

These factors – a strong growth component and reliable business model – have led to very significant dividend income over the years as well. Just in the last decade the per share dividend has grown by an average compound rate of nearly 14% per annum.

Enbridge has now paid dividends for over 63 years. Not only that, the company has increased its dividend for 21 straight years. And it’s not like we’re talking about a 1% increase here or a 2% increase there. As illustrated above, the payout increases have been material.

As a side bar, it should be noted that Enbridge is based in Canada and thus subject to different dividend rules than an U.S. income investor might be used to. Per the company’s website, for Canadian shareholder’s dividends paid by Enbridge would generally be considered as “eligible dividends,” that are entitled to the enhanced dividend credit.

For non-resident shareholders, Enbridge dividends are subject to a Canadian withholding tax of 25% unless the rate is reduced as a result of a tax treaty between Canada and your home country. For U.S. shareholders, this means that the withholding tax is generally reduced to 15% and you may be able to claim a credit against your local taxes.

It should be underscored that this is not tax advice, but merely an indication that the investment income generated by Enbridge could be treated differently than owning shares of say Coca-Cola.

With that in mind, let’s look at the company’s expectations for its future dividend payments.

Here’s what the company is anticipating for its Available Cash Flow From Operations: 12% to 14% annualized growth from 2014 through 2019.

In addition, the company also has a goal of paying out 40% to 50% of this metric in the form of cash dividends. Last year Enbridge reported Available Cash Flow of $3.72 per share against a per share dividend payment (paid quarterly) of $1.86. (Keep in mind that these numbers are in Canadian dollars.) This equates to a payout ratio, based on the company’s adjusted metric, of 50%; or just on the high side of its preferred range. As such, you’d still anticipate robust dividend growth, but perhaps not quite as robust as the available cash flow growth projections.

Here’s what that could look like, as highlighted in the company’s most recent investor community presentation:

Naturally, things could go much worse than anticipated and the dividend growth may not formulate. One need not look further than industry giant Kinder Morgan (KMI) to find an example of a firm that had to cut its dividendafter projecting robust growth in the years to come. Still, Enbridge has a history of strong payout growth and management’s intention of continuing along this path.

For the next two quarters of 2016 you’d anticipating receiving $0.53 in dividends, or a total of $1.06. (Keeping in mind that we’re using Canadian dollars. You can do the same sort of calculations in U.S. dollars, but that also requires an additional step as to projections about the future exchange rate. For our purposes we’ll stay in Canadian dollars, with the information in hand that you can adjust according to your own expectations.)

Over the next three and a half years you might anticipate dividend payments along these lines:

These numbers are based on the assumption of 11% annual payout growth, the midpoint of Enbridge’s expectation. In total you might anticipate collecting $8.90 or so in dividend payments over the next three and a half years.

Coming up with a future share price is naturally difficult, but let’s work with a few scenarios to get an idea of the current value proposition.

Should Enbridge grow its dividend by 11% annually and trade with a future dividend yield of 4%, this would imply a future share price of about $72.50. That’s a total value of just over $81 once you add in dividends. Expressed differently, based on a share price near $53, that equates to an annualizedtotal return of nearly 13%. As a point of reference, that’s the sort of thing that would turn a $10,000 starting investment into $15,000 after just three and a half years.

Incidentally, shares of Enbridge were trading hands materially lower to start the year – which highlights an important concept. Obviously an investor would have preferred to buy shares at a lower price instead of today’s much higher one. However, just because the share price is now much higher this does not simultaneously indicate that all is lost. As was just illustrated, today’s price – depending on your expectations – could still offer a compelling value proposition.

Enbridge has proven itself to be a stable and reliable source of income over many decades. Naturally this does not have to hold in the future, but the company is presently anticipating more of the same. Should this come to fruition, the potential returns implied by the baseline are impressive.

But Enbridge is not the only high quality Canadian dividend stock that ranks well using The 8 Rules of Dividend Investing.