Dominic received his MBA in Management and Finance, and is a CFA charterholder. He is a member of the CFA Institute and CFA Society of San Francisco. He has been employed at BNP Paribas for 13 years. He later received a diploma (Credit Analysis) from New York University. Dominic had received the Series 7 and 63 certification from FINRA when he was a small-cap analyst and economics editor for a weekly newsletter. Dominic received the FRM (Financial Risk Manager) designation in 2014.

I remember one of my first jobs out of college.  It was as a small-cap equity analyst.  This was the holy grail for me since childhood.  Most kids played sports during their leisure time, but I read stock charts like an astrologist reads the night sky.

My supervisor was a certified financial analyst and I quickly took to the mentor-mentee relationship. However, the bromance ended quickly.  I slowly learned, through circumstantial evidence and mystery envelopes found on my desk, that my employer was a pump & dump broker.  Back then, they were called boiler rooms – go see the movie.  As I slowly peeled that onion, I eventually realized that my employer was rotten at its core.

My employer’s modus operandi was selling shares of “story stocks” to innocent investors.  Think of your sweet grandma and frail granddaddy – they were the “total addressable market” for selling penny shares to.  The shares typically rose initially, which brought in even more investors that had FOMO (fears of missing out).  After 6 months, the shares then plummeted, typically declining over 90%.  When investors called to sell, the brokers’ lines suddenly went silent.

There are several ways boiler rooms profit from penny stocks including brokerage fees, etc. but the largest method is by having “relationship entities” and/or insiders owning a large proportion of the company.  Their shares are then sold during an IPO or run-up in shares of already public companies.

My friends, Helios and Matheson (NASDAQ:HMNY) reminds me of those days though the company may not be part of a calculated pump & dump scheme.  As a reminder, HMNY is the 92% owner of MoviePass, having initially invested $27MM in August 2017 (for a total sum of $72MM as of Dec 2017).  I was introduced to MoviePass last fall when my sister-in-law ranted & raved that it was the greatest thing since sliced bread (just $10/month).  My dollar-wise wife surprised me by purchasing an annual contract, which further reduced the cost to $7/month.

I recently pored through several critical Seeking Alpha articles; most authors have calculated how unprofitable the business model is.  It usually goes something like this:  HMNY pays full price for tickets but its MoviePass customers (depending on how many times they go to the theater) pay less, so HMNY is losing money.  My response to you is – not all management is stupid.  HMNY’s management team can clearly see that losses are rising as subscribers grow.  If the business model made them the next Netflix, so be it.  But that may not have been their intention.  Management and insiders benefited when their shares (received through stock awards) rose or from company fees given to them.  The Netflix shtickwas the story that MoviePass CEO Mitch Lowe was hoping could elevate HMNY’s share price.

Insider Muralikrishna Gadiyaram, for example, received shares which he later sold at a lofty $13/share (pre-reverse split) on November 2017 according to SEC Form 4.  The stock chart below is for the 1YR time period of May 2017 and May 2018 (post reverse-split prices).  The history of his beneficial ownership of HMNY can be found here.  Gadiyaram also receives consulting fees on an ongoing basis, according to Item 13 and Note 18 of the recent Annual Report. 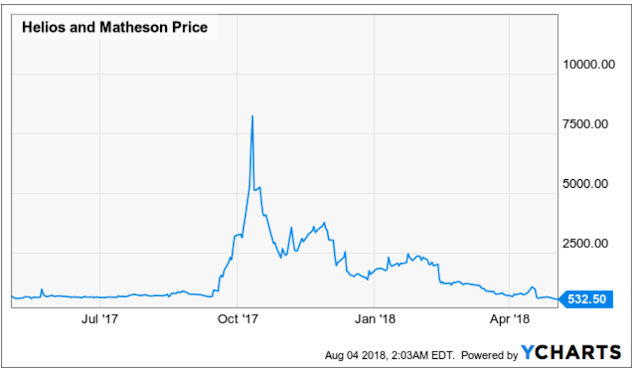 Penny stocks (which are sometimes manipulated) tend to be extremely small, with Revenues under $100MM, have had corporate name changes, are controlled by dubious insiders, file late (or amend forms) with the SEC (Securities & Exchange Commission), conduct transactions with related entities, have had a reverse merger or corporate structure changes, are not audited by the Big 4, have misleading statements, and have weak accounting quality and governance (AGR).  While HMNY may not be part of a calculated scheme, note that the company has some of those attributes.  Examples of these characteristics are listed below:

3. HMNY is controlled by dubious insiders: Its parent company, HMIT controlled approximately 75% of HMNY until November 2016 when HMNY merged with Zone Technologies (controlled by then CEO Ted Farnsworth).  After the merger, Farnsworth and HMIT owned 59% of HMNY. According to Bloomberg, Farnsworth was involved with penny stocks – three companies he led had shares decline 99% despite his (overly) ambitious plans.

5. Transactions with related entities:  As already mentioned, HMNY has conducted transactions with HMIT including consulting and other fees to controlling shareholders of HMIT.

6. Corporate structure changes:  There have been many changes within and between HMNY and HMIT including the shift in control of HMNY (and MoviePass) from HMIT to HMNY.  One wonders what the courts allow in India – there must be some version of fraudulent conveyance?  In addition, Zone Technology, a private company acquired by HMNY, announced on March 2018 that it would be spun-off into a publicly traded entity (but with what assets?!)

7. Misleading statements:.  HMNY’s CEO Ted Farnsworth stated to Variety magazine during a May 2018 interview at Cannes that the company has an equity line of credit, alluding to what is more commonly called a committed Revolver.  That is untrue, as I have not seen evidence in the quarterly or annual reports sent to the SEC.  The SEC requires that all forms of liquidity, including both internal and external, be disclosed.  The SEC rule can be found here.   Farnsworth is also on the record saying that HMNY would be worth $1 billion once it reaches 2.5 million subscribers.  As of this writing, Moviepass has over 3 million subs and its market cap is under $1 million.  On April 2018, HMNY said it would get into the film studio business and acquired a stake in the John Gotti film (awful movie by the way).  Besides lacking the funding to get into the craft of making films, the business rational was that MoviePass can “guarantee box office attendance”- Really?!

8. Weak accounting and governance (AGR): HMNY’s very own annual report for 2017 states that “Management has determined that the Company did not maintain effective internal control over financial reporting as of the period ended December 31, 2017 due to the existence of the following material weakness identified by management: Lack of Accounting Resources.”  Further, the AGR research firm MSCI GMI Analyst rates the company “1”, its worst score.  HMNY is not audited by a Big 4 accounting firm.  Its auditor is Rosenberg Rich Baker Berman, P.A.

Investors should avoid HMNY shares like a bad movie.  The company recently took out a payday-like loan ($5 million) from a hedge fund that was repaid on August 5th 2018.  The loan was necessary to “keep the lights on” as one would say.  The company also has a $1.2Bn shelf offering filed with the SEC.  While this article is not focused on HMNY’s accounting, do note that HMNY is bleeding cash.  The company has just$14MM in unrestricted cash and reports $42.5MM on its balance sheet as of March 2018 (see table).

Total Liabilities are greater than Total Assets which classifies the company as insolvent according to IRS rules.  It is just a matter of time before the company files for bankruptcy given that it is insolvent and has a$68MM operating cash flow deficit.  The $22MM/month deficit is greater than the $14MM in unrestricted cash.  Management and its independent auditors said there is “substantial doubt” the company can continue in its recent Annual Report.  Management is actively changing its subscription model (see next section) however, a turnaround appears to be a long-shot.

July 31, 2018, HMNY said it would boost prices by about 50% so a membership would now cost $15/month, black-out first-run movies for the first two weeks of their release, continue charging “peak pricing”, make customers take photos of their tickets and additional tactics to improve cash flow.

I believe the above changes in the MoviePass plan creates confusion and uncertainty among customers which will lead to higher churn and loss of goodwill.  In September 2011, Netflix changed its subscription plan, losing 800,000 customers in the process.  My wife, for example, has already switched to AMC’s competing plan, and while more expensive, there’s a peace to certainty.

The point of this article wasn’t to debate HMNY’s business model or do a forensic accounting of financial shenanigans.  Given my background in penny stocks, I wanted to show you how to avoid shoddy investments by using a qualitative common sense approach.  Even if life-saving financing miraculously appears, an SEC investigation will likely ensue given the company’s shady history and misleading statements.  Why bother with such nonsense when they’re many good fish in the Sea?

The approach above was created using the Mosaic Theory, as postulated by the CFA Institute.  It is a method of analysis used by stock analysts to gather information about a corporation.  It involves collecting public, non-public and non-material information about a company to determine the underlying value of its securities and to enable the analyst to make recommendations to clients based on that information