Not only did Hasbro reward shareholders with a higher share price, but the company also raised its quarterly dividend by 12%.

Hasbro is a Dividend Achiever, a group of 272 stocks with 10+ years of consecutive dividend increases.

Hasbro stock has something to offer nearly all investors. It is a growth company, with an above-average dividend yield, and is a high dividend growth stock as well.

This article will provide an overview of Hasbro’s performance in 2016, and what the company will do to grow the business in 2017 and beyond.

Hasbro is a global toy manufacturer. The company operates the following segments:

For the fourth quarter, Hasbro reported revenue of $1.63 billion. Analyst expectations called for $1.5 billion. Meanwhile, earnings-per-share came to $1.64, which handily exceeded expectations of $1.27.

On a year-over-year basis, Hasbro’s revenue and earnings-per-share rose 11% and 10%, respectively, from the fourth quarter of 2015.

Hasbro also realized growth across product categories. Franchise brands grew 3% for the quarter, due to growth in the Nerf, Transformers, and Monopoly brands.

Revenue from games rose 11% in the fourth quarter, due to growth in the Pie Face, Duel Masters, and Speak-Out games. Lastly, revenue from Hasbro’s partner brands increased 16%, thanks largely to growth of Disney (DIS) Princess and Frozen toys.

Hasbro’s fourth-quarter performance capped off a phenomenal year for the company.

All three operating segments posted excellent growth in 2016. U.S. and Canada, International, and Entertainment and Licensing revenue increased 15%, 11%, and 8%, respectively.

In all, Hasbro generated record revenue and earnings in 2016. The company surpassed $5 billion in annual revenue for the first time in its history.

The most attractive long-term growth potential for Hasbro is expansion into new geographic markets. Hasbro’s international business is firing on all cylinders.

In particular, Hasbro is growing in several premier emerging markets in Asia-Pacific and Latin America.

Not only that, but Hasbro’s operations in Europe are performing very well, despite the weak economic growth and heightened uncertainty facing the European economy.

Hasbro’s industry-leading growth is thanks largely to its popular brand portfolio. Strong brands have allowed Hasbro to capture market share against its main competitors.

Last year, Hasbro gained market share in most of its core geographic markets, including the U.S., U.K., Brazil, and Russia.

Hasbro keeps its brand image high because of significant advertising. The company’s advertising expense over the past three years is as follows:

Another catalyst for continued earnings growth is cost cuts. Hasbro has effectively managed its cost structure, by expanding operating profit margin for three years in a row.

And, even though sales rose at a double-digit pace last year, the company ended 2016 with roughly flat inventory levels from the previous year-end.

Lastly, Hasbro’s Entertainment and Licensing business is a growth catalyst. One specific area that is very attractive is mobile gaming. The company made a major push in mobile gaming through its investment in Backflip Studios.

Hasbro does not yet break out performance of mobile gaming separately, as mobile is still a fledgling operation. However, will be a major contributor to Hasbro’s Entertainment and Licensing segment, as will Hasbro’s new story-driven lifestyle brand, Hanazuki.

Hasbro launched this brand in 2016 on YouTube, with animated stream content produced by Hasbro Studios. In the first three weeks alone, it was viewed over 49 million times.

As a result, Entertainment and Licensing is likely to be an increasingly significant part of Hasbro’s business moving forward.

Hasbro is a very shareholder-friendly company. In 2016, it returned $400 million to shareholders. The cash returns consisted of $249 million in dividends and $151 million in share repurchases.

The recent 12% dividend is the company’s 13th dividend raise in the past 14 years. 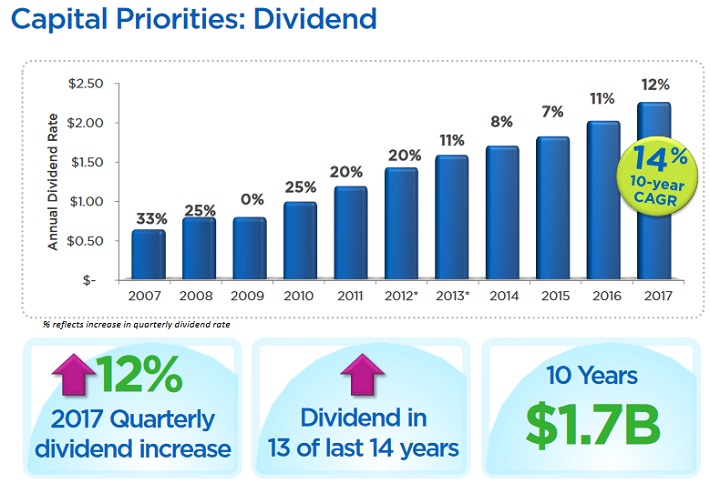 In the past decade, Hasbro has increased its dividend by 14% each year, on average. It paid $1.7 billion of dividends in the past 10 years.

Going forward, Hasbro’s annualized dividend will rise to $2.28 per share. This represents an attractive 2.4% dividend yield.

Hasbro’s yield exceeds the S&P 500 Index average yield, which is 2%.

This leaves the company with more than enough flexibility to continue raising the dividend, even if earnings growth slows somewhat in the years ahead.

After investing in the business and paying dividends, repurchasing stock is a capital allocation priority for Hasbro. 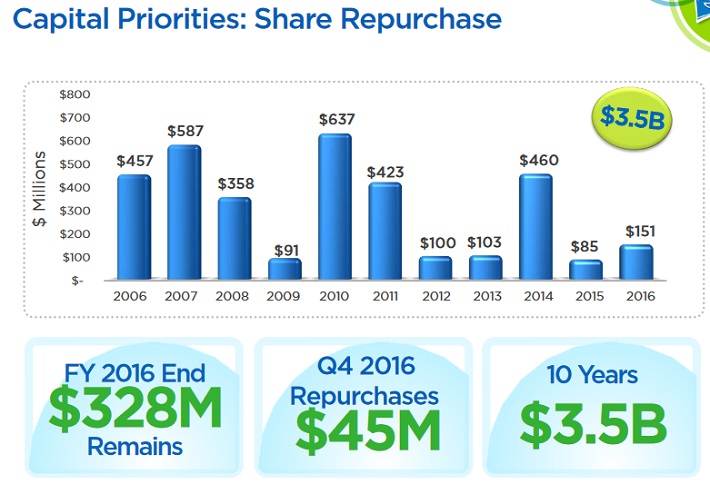 Importantly, Hasbro is in sound financial position. The company ended 2016 with $1.3 billion in cash and marketable securities, which exceeds the $1.2 billion the company carries in long-term debt.

Hasbro competes directly with Mattel, Inc. (NASDAQ:MAT) in the toy industry, and based on their respective financial performances in 2016, it’s clear Hasbro is winning the war.

It has taken market share against its main rival. Perhaps the biggest example of this was in 2014, when Hasbro was awarded the lucrative Disney contract.

This is a big reason why Hasbro has significantly outperformed Mattel over the past few years, and why Hasbro stands as the better dividend stock of the two toy giants.