Has The Stock Market Peaked Yet?

EconMatters- May 28, 2015, 9:01 AM EDT
SHARE ON:
By Russ Koesterich
Despite higher rates, U.S. stocks have scored several record highs in recent weeks.
Stocks have been posting new records despite investor concerns about slowing U.S. corporate profit growth, persistent sluggishness in the economy and Greek bailout negotiations – to name just a few of the headwinds facing equities today. Adding to the anxiety is the fact that many investors are reasonably worried over the impact of the first Federal Reserve (Fed) tightening in nearly a decade.
Even Fed Chair Janet Yellen couldn’t help noticing in May that stock prices had become “quite high,” leading many to speculate that the U.S. central bank thought stocks had become overvalued.
However, there are several reasons why I believe we’re not yet at the peak.
Market highs aren’t the same as market tops, and stocks reach new highs fairly often. The S&P 500 has “celebrated” a new high on average 13 times per year, or 5% of all trading days, since 1928, as the chart below shows.
LOTS TO CELEBRATE SINCE 1928 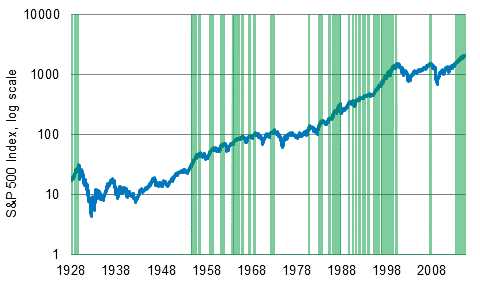 Note: Shading represents a new high in the S&P 500. Past performance is no guarantee of future results. A logarithmic scale is a nonlinear scale used when there is a large range of quantities. Source: Bloomberg, BlackRock Investment Institute, as of 5/19/15.
And this statistic may understate the true frequency of market highs, since it includes the 25-year period after the 1929 crash when the S&P 500 failed to reach a new high. In other words, the market highs aren’t actually very newsworthy, given that they happen so often.
Valuations can go higher. With the exception of the 2007 market peak, most of the bull markets of the past 25 years witnessed a peak valuation on the S&P 500 of roughly 20x to 22x 12-month trailing earnings, higher than the S&P 500’s 17.5x valuation today. To be sure, not surprisingly, market peaks in the higher inflation, higher rate environment of the late 1960s to the mid-1980s tended to occur at a lower valuation, not far from where we are today. However, we’re in a different scenario, given the low-inflation, low-rate economic environment we expect for the foreseeable future.
Fed tightening doesn’t necessarily mean a bear market. The Fed is likely to begin raising rates this fall, but this doesn’t mean markets are in for a major correction. Looking at history, U.S. stocks tend to initially react negatively to the start of a tightening cycle and then rebound 6 to 12 months later, producing positive, albeit subpar, returns over the longer term. Of course, the fact that U.S. equity multiples have been consistently rising since 2011 means that markets are at greater risk for at least a modest correction, say, 5% to 10%, following Fed liftoff. That said, an initial tightening of U.S. monetary policy is unlikely to end today’s bull market.
While we may be quite happy to learn that the market is moving higher, a new high is neither something to be celebrated nor feared. New records are fairly routine and don’t necessarily contain a lot of information. History suggests that, absent an exogenous shock, neither valuations nor rates represent an imminent threat to the bull market.
Still, U.S. stocks are no longer cheap. While investors shouldn’t abandon the United States, we believe they should be raising their allocation to international equity markets, such as the Eurozone, Japan and select emerging markets. These overseas markets are also posting new highs, but at much more reasonable valuations.
Research Report
analyst ratings
blogger opinions
investor sentiment
news sentiment
analyst ratings
insider activity
hedge funds
stats charts
You May Also Like