The Federal Reserve (Fed) kept interest rates on hold last week as expected, while simultaneously upgrading its economic view. The central bank recognized that U.S. economic data remain stronger than that seen in much of the rest of the world and that “near-term risks to the economic outlook have diminished.”

After the mildly hawkish policy statement, the big question now is, where will the Fed go from here?

I believe we are likely to see only one Fed rate hike in 2016 given current modest U.S. growth trends. Unless we see a significant improvement in U.S. labor market data, a meaningful pickup in U.S. inflation measures and further stability in global financial markets, much more policy normalization may be difficult for the Fed to accomplish. As seen in the chart below, U.S. jobs growth has slowed a bit from a very strong trend, and inflation expectations and realized inflation remain fairly moderate, likely keeping the Fed on a very deliberate path. 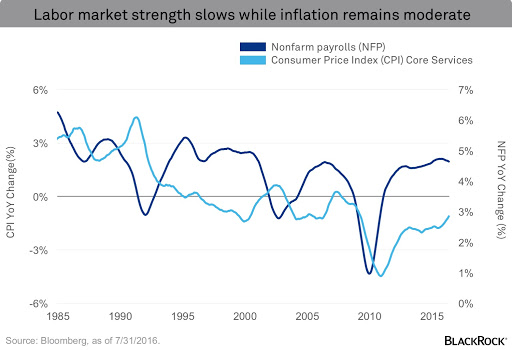 Meanwhile, more than one 2016 hike is also unlikely given that domestic and international political risks may continue to unsettle financial markets, with a number of important and outcome-uncertain political events ahead on the 2016 calendar. These include the U.S. elections on November 8 and the Italian constitutional reform referendum later this year.

But regardless of when the Fed will hike again, one thing’s certain: Extraordinarily low interest rate levels are no longer what’s needed to stimulate real economic growth. We believe the baton must now be transferred from monetary authorities to the fiscal channel, if we are to see any meaningful U.S. economic growth uptick. Of course, the possibility of future fiscal policy support, and even the continuation of extraordinary monetary policy, may depend on the aftermath of what happens via the ballot box this November.