Groupon Inc (NASDAQ:GRPN) held its very first Analyst Day this week, and management provided more visibility regarding the challenges they face and what lies ahead for the company. The daily deals company also provided some real-life examples of how it is helping merchants grow their businesses.

What happened at Groupon’s Analyst Day?

In their report dated Nov. 12, 2014, Sterne Agee analysts Arvind Bhatia and Brett Strauser said management’s main message was that their North America Local business has hit an inflection point and that they should be able to sustain double digit growth.

The other main point Groupon management made was that the Goods business is still growing well. They reported that the mix of orders on mobile devices has improved and that margins have improved as well. Management expects these points to result in “much stronger financial performance on a sustainable basis in the coming years,” according to the Sterne Agee team.

The analysts say that Groupon remains “mostly a ‘show-me’ story,” noting that sentiment on the company is still negative and that their Buy rating goes against the views held by most of the rest of Wall Street. However, they are now more confident that Groupon is turning around after the Investor Day.

They expect volatility in the company’s earnings results to continue for now, but they think the improvements Groupon is making are sustainable. As a result, they think it’s possible that the company’s shares will have “meaningful upside.”
Moving past the bear thesis on Groupon
At the Investor Day, the Sterne Agee team found a few new metrics that they say go against the bear thesis. For example, the daily deals company offered an example that demonstrated the true take rate on Groupon and also the rate of commission paid by merchants, saying that it’s closer to 20% compared to the 35% to 40% that were reported. The difference is due to the “overspend” from the company’s customers.

The analysts say this is an important point because bears think that Groupon’s take rates are just too high and can’t be sustained. However, the company said that over 80% of the merchant campaigns run on the company’s platform start out profitable. They add that this also helps to refute bearish views on the company.

Other metrics Groupon management disclosed include the North American transactions percentage resulting from search was 24% in the third quarter, compared to 9% in the same quarter last year. Management previously only mentioned the percentage of traffic coming from search, which was only 10%. Additionally, they said that about 60%of customers Groupon sends to merchants are either new or first time customers for those merchants and that this percentage has remained stable in the last few years.

The Sterne Agee team has a Buy rating and $12 per share price target on Groupon. 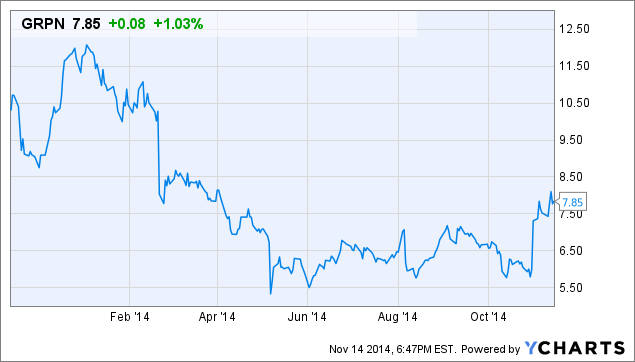