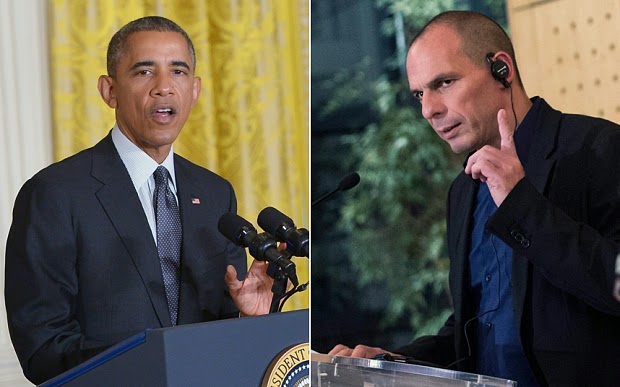 Hopes ran high among Europe’s unelected bureaucratic oligarchy and the Troika of official creditors that the Greek government, after the ECB openly dropped hints of a Greek IOU currency in the immediate future, would finally relent over the weekend and admit that all of its promises to its voters were a lie and that the Tsipras government would finally pick up where the Samaras government left (and was booted) off. There was even a perfect venue: Washington D.C., where Varoufakis and Obama met for the first time.
The hopes were promptly dashed after Greece, once again, said it would not “renege on election pledges to end austerity measures as creditors pressed for a compromise.”
The full court assault against Greece from all sides came fase and furious.
As Bloomberg notes, both president Obama and ECB president Mario Draghi called on the Greek government to do more to resolve the standoff amid depleting cash reserves.
And for the first time, a voice formerly quite sympathetic to the Greek cause, that of France, expressed increasing frustration with the pace of negotiations and openly chided Greece.
This happened when French Finance Minister Michel Sapin spoke after the IMF meeting in Brussels yesterday saying he “doesn’t expect a resolution of Greece’s financing issues to be achieved in coming days, including at a meeting of European finance ministers in Riga April 24 and 25.”
“We’re in the same situation at the end of these meetings as at the beginning. That’s in part because Greece wasn’t on the menu,” Sapin said. “A lot of time has been lost and it won’t be recovered” he added.
Ironically, the French government is now openly criticizing the Greeks, saying the “need to work work work and work seriously” on their economic plans “out of respect for the Greek people.” Ironic, because it is “out of respect” for the people’s choice to end the Troika’s meddling in Greece that Europe is in the current dead-end.
Let’s not forget that this is the same French government that itself missed its budget deficit target two months ago and avoided a EU deficit penalty just because in Europe some are more equal than others.
The irony continued: “Greece needs to respect the rules that apply to all countries in the euro”…. except France? “Greece hasn’t only signed memorandums, but has signed treaties.”
The criticisms escalated into threats when ECB Governing Council member Vitas Vasiliauskas said that “the situation in Greece means that we should have a limit until summer” for providing Emergency Liquidity Assistance for Greece. He added that “everyone understands what ELA means, it’s a temporary measure to give the banks liquidity. We will have to have discussions about the issue liquidity provision versus monetary financing. We will certainly have these discussions before summer.”
Once again a case of some being more equal than others, because all the ECB’s QE really is, is monetary financing of insolvent peripheral nations courtesy of an ECB backstop which makes rates so low Spain and Italy can both go on a borrowing spree, and even issue 100 year paper, and everyone will line up simply because the ECB has blessed said paper. For now.
However, when it comes to Greece and suddenly the ECB is very concerned about “monetary financing.”
Finally, the big guns came out when Mario Draghi himself said the euro area was better equipped than it had been in the past to deal with a new Greek crisis but warned of “uncharted waters” if the situation were to deteriorate badly. As the FT reported, Draghi “called for the resumption of detailed discussions aimed at resolving the country’s debt woes and urged the Greek authorities to bring forward proposals that ensured fairness, growth, fiscal stability, financial stability.“
Said otherwise, to do precisely as the Troika demands.

Greek officials, including Deputy Prime Minister Yannis Dragasakis, stood their ground.
“We want a viable solution within the euro,” Dragasakis said in an interview published Sunday in Athens-based To Vima newspaper. Still, “we don’t budge from our red lines.”

The Greek “red lines” are refusing to cut wages and pensions, introduce new taxes or sell state assets, Alternate Health and Social Security Minister Dimitris Stratoulis said in an interview Saturday with Athens-based Skai TV. “The Syriza-led government will carry out the reforms the Greek people need, not ones requested by our creditors,” he said. The country won’t be pressured “by euro-exit threats,” he added.
And then Greece brought out the tactical weapons: “Snap elections or a referendum are possible options should negotiations with creditors stall, Dragasakis said.“
Which goes to the heart of the problem, because while the Greek population wants an end to austerity (hence the election of Syriza), it also wants to remain in the Eurozone and keep the Euro. As such a referendum and snap elections would finally push the decision away from the government and give it to the general population, something the eurocrats, who pride themselves in their “technocracy” are terrified of, and would never forgive.
Meanwhile, Greece may have no money left but it still has pride: “Greece won’t agree to any privatization, Energy Minister Panagiotis Lafazanis said in an interview published Sunday in Athens-based Real News newspaper. While “so-called” partners, including unidentified International Monetary Fund officials, want to “blackmail” the Greek government into adopting measures that would hurt the working class, “we won’t betray the people’s mandate,” he said.
While on the surface Greek defiance is inexplicable having run out of all negotiating chips, the news yesterday that none other than Vladimir Putin may be coming to the Greek rescue with a €5 billion advance gas pipeline payment may have given the Greeks a sense of leverage.
That, however, was promptly dashed subsequently when Russia denied the Spiegel report.Reuters cited Kremlin spokesman Dmitry Peskov, who in comments made to Business FM radio and quoted by RIA news agency, said “No, there wasn’t (any agreement).”
Peskov reiterated that the Greeks had not requested financial assistance during talks in the Kremlin earlier this month between Prime Minister Alexis Tsipras and Russian President Vladimir Putin.
“Naturally the question of energy cooperation was raised. Naturally … it was agreed that at the expert level there would be a working-out of all issues connected with cooperation in the energy sphere, but Russia did not promise financial help because no one asked for it,” Peskov was quoted as saying.
Of course, this is merely diplomatic double talk, and all it suggests is that Russia is awaiting the official admission from Greece that it will pivot to Russia. For that to happen, Greece will have to formally state that in addition to creditor negotiations it is now openly looking to Moscow (and Beijing) for additional aid. The problem is that such a statement would promptly end any hopes of a Greek deal with its Troika creditors.
As such Greece is simply trying to delay making the choice of picking its future path, be it west or east, until the very last moment. However, since Greek liquidity is now non-existent and the government has almost run out of public funds to pillage, Tsipras will have no choice but to make that choice in the coming days.
Research Report
analyst ratings
blogger opinions
investor sentiment
news sentiment
analyst ratings
insider activity
hedge funds
stats charts
You May Also Like