Greece and Eurozone: The Marriage May Endure, But Even More Unhappily Than Before

EconMatters- June 29, 2015, 6:07 AM EDT
SHARE ON:
The Greece crisis has lasted for more than five years and now the meeting with its creditors seems to be lasting for days. The country needs new bailouts in order to pay back its earlier debts. This week Greece might be reaching a decisive point: to stay in the Euro or exit. A look at its banking system highlights the troubled economy of Greece.

The signal that banks are facing tremendous pressure reflects in the withdrawals done in installments in Greece. The number of customers withdrawing cash from their bank accounts could make Greece face a banking disaster. The latest reports note more than €4bn withdrawn last week.

There is a sense of a fear that the country might be facing conversion to a new currency and when that happens, the withdrawal limits of Euros might get restricted. However, matters cannot get any worse for the country. The crack between the government of Prime Minister Alexis Tsipras and its creditors: IMF, the European commission and European Central Bank (known as Troika) has deepened with passing time. The creditors believe that in order to restore the long-term financial health, Greece needs to implement budget cuts through pensions and sales-tax increases. On June 17 2015, Greece announced that it had run out of money and hence could not pay the money it owed to IMF by the end of July.

The amount it owed was €1.54bn (approximately £1.1bn). International Monetary Fund (IMF), Christine Lagarde said the international institutions have shown Greece a lot of flexibility think time there will be “no period of grace” The IMF and the Eurozone government have been trying to keep Greece afloat for a long time now. Greece received around $279 billion as emergency loans over a period of five years. June 30 is the date when the Eurozone portion of the bailout runs out.

According to many, Greece Prime Minister Alexis Tsipras has been caught between the promises of his domestic voters and the commitments he made to the creditors, which he must respect. Greece makes up 2% of the Eurozone economy and whether it stays or exits will be impactful. 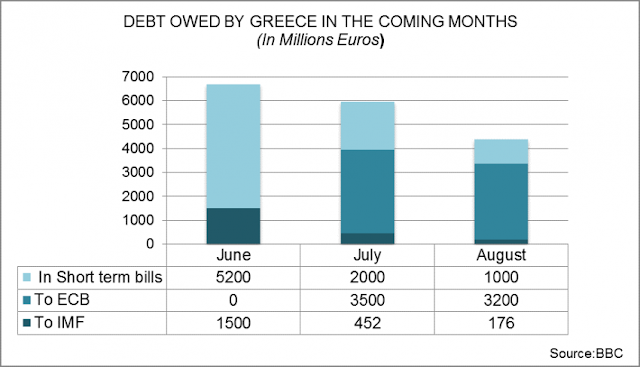 On June 22 2015, the Eurozone partners welcomed Greece’s new reform proposal, which formed the basis of discussion between Greece and its creditors. The proposal highlighted issues relating to savings in pensions that were linked to curbing an early retirement and increasing pension contributions, selective increase in VAT, privatizations, tax hike for high earners, corporate and luxury tax hikes, public sector wages, spending cuts, primary budget surplus, bonds, investment and numerical targets. The bailout reform programme, with less than a week until it expires i.e. 30 June, showed some basic differences between Greece and its lenders. One of the biggest debates relates to the taxes and pensions.

For instance, creditors disagreed to accept an introduction of 12% corporate tax on companies with a profit of more that €500,000. Creditors also differ on the Greece’s proposal of raising revenue by raising social security contribution from employers and limiting early retirement. IMF director Christine Lagarde said that the Greek government’s tax plans were not feasible. “You can’t build a programme just on the promise of improved tax collection, as we have heard for the past five years with very little result,” she said in an interview for the French magazine Challenges (in French). She added that she did not want an exit of Greece and if it happened, the short-term contagion risks are low in the Eurozone. However, if after Grexit, Greece needed the support of IMF, the latter will be there for any help, she added.

Until 25 June, Prime Minister Alexis Tsipras failed to reach a deal with Greece’s creditors. Germany’s Angela Merkel warned that these talks were not leading to a constructive conclusion. “We still haven’t made the necessary progress; in some places it looks like we’re even going backwards,” she told reporters.

Other EU officials feel the same. Many feel that if creditors do not accept the reforms and no conclusion is reached until Tuesday (June 30 2015), then Greece might exit the common currency zone. S&P says, “We consider that Greece’s exit—coupled with the loss of emergency European Central Bank financing—would bankrupt Greece’s financial system.” However, with talks heading a dead end, it is still difficult to fathom whether it will be Greece’s loss or the Eurozone with Greece exiting. This probably is a situation, which will be a loss in either case: if Greece exits, it could be a bigger issue for Eurozone and Greece will have to fight its own battles with no common currency nation by its side.

The Greeks will find their savings devalued and Greece could be in financial and political turmoil. Its exit could also be a leading example to other Eurozone countries that have received bailout packages like Ireland and Portugal. However, not only Greece, other Eurozone countries could face the repercussions of Grexit, which could reflect in the stock markets.

If Greece stays in the Eurozone, then it is likely that most of the points in the five-page document of reforms by Greece have been more or less agreed upon by the creditors. This might not change much of Greece’s debt position, as has been the case in the past few years. Like the Economist magazine says, “The marriage may endure – but even more unhappily than before.”