EconMatters- June 29, 2015, 6:38 AM EDT
SHARE ON:
Now that the Greek parliament has given PM Alexis Tsipras’ euro referendum the go ahead (the vote will effectively be a poll on euro membership or, on the choice between sovereignty and servitude if you will, because as the IMF flatly noted on Saturday, the proposal that was supposed to form the basis for the referendum will be null and void by the time Greeks go to the polls) and now that Greeks have pulled another €1 billion plus from the ATMs, capital controls are all but certain early next week, especially now that the ECB has frozen the ELA cap. This means the crisis, to use Irish FinMin MIchael Noonan’s words, “has now commenced” and a “Lehman weekend” is indeed underway.
Against this backdrop, multiple “emergency” meetings have been scheduled for Sunday as EU officials scramble to figure out how best to deal with what is likely to be a turbulent week and to consider the financial impact a potential Grexit will have on the currency bloc, its member nations and institutions, and on the global financial system as a whole.
Here’s Bloomberg with more:

And more from Handelsblatt (via Google translate):

Because of the impending bankruptcy of Greece are on Sunday a series of crisis talks planned. The most industrialized countries (G7) wanted throughout the day to advise on a conference call, said a representative of the Euro zone the Handelsblatt.
The conversation should at Deputy level, ie between the state secretaries, take place. It serves mainly to inform the non-European governments on the developments in the Greek crisis.
In addition, was also a Sunday teleconference of European Banking Supervisors (SSM) planning, told the Handelsblatt. There are representatives of the European Central Bank (ECB) and the national supervisory authorities. In the Phone Unlock should be advised on the situation of Greek banks and the possible impact on the European financial system, it said.

Meanwhile, German Chancellor Angela Merkel is set to confront lawmakers in Berlin on Monday and apprise them of the latest developments in the Greek drama. Over the course of the last two months, political support for continued aid to Athens has worn thin among German MPs, while influential Finance Minister Wolfgang Schaeuble has at every turn expressed reservations about the lengths Europe has gone to in order to keep Greece afloat. Here’s Bloomberg again:

Expect some lawmakers to ask how exposed Germany is to a Greek default. After all, given Berlin’s role as the EU paymaster and the country’s massive TARGET2 credit with the ECB, Germany stands to lose the most (financially anyway) from a potential Grexit, considering EFSF contributions and the country’s share of committed ECB credit lines. Once more, via Bloomberg: 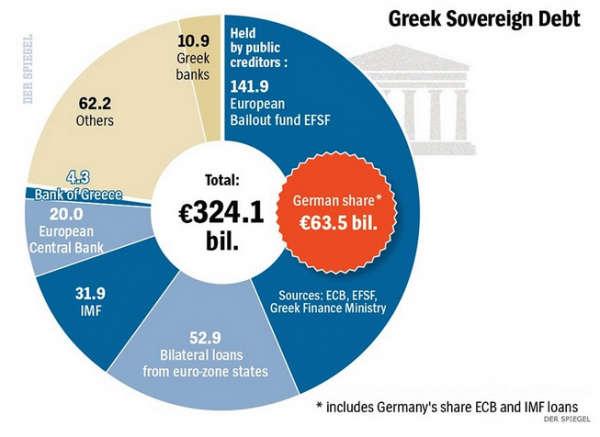 And indeed, Germany’s financial ‘obligation’ to assist its ailing EU ‘partner’ may persist long after Grexit, because as we’ve warned repeatedly, the economic malaise that will almost certainly accompany default and redenomination will create a political and social crisis, the magnitude of which will likely necessitate outside intervention. With that, we’ll leave you with the following, again from Bloomberg, citing Gunter Krichbaum:

Lower house of parliament may have to meet during summer recess to vote on measures related to Greece. German lawmakers may need to approve “humanitarian aid” because a Greek default may ignite unrest.