Google Inc (GOOG) Is Bringing Driverless Cars To California This Summer, But Will There Be A Roadblock?

EconMatters- May 22, 2015, 9:00 AM EDT
SHARE ON:
The future is coming – and it’s coming this summer to California.
A state renowned for its technological innovation will bring the latest glimpse of our future world order directly into the public eye in Mountain View.
Tucked in between San Jose and Palo Alto, Mountain View is part of America’s tech epicenter.
It’s also home to Google Inc (NASDAQ:GOOG) – an industry giant that’s quite literally taking its latest innovation to the streets.
As we reported on Tuesday this week, Google just announced that 25 of its specially designed prototype driverless cars will be rolling off the test tracks and hitting the open roads.
For some, this is the next exciting step en route to a tech-laden driverless future.
But for others, despite the fact that safety drivers will be on board and the top speed is capped at 25 mph, the news is sure to stir up controversy. Here’s why…

Dear, Humans… Get in the Backseat

Google’s goal is simple: Eliminate as many drivers from the roads as possible. Why?
Because it wants to “transform mobility for millions of people, whether by reducing the 94% of accidents caused by human error, reclaiming the billions of hours wasted in traffic, or bringing everyday destinations and new opportunities within reach of those who might otherwise be excluded by their inability to drive a car.”
Sounds idyllic, doesn’t it?
Unfortunately, as I outlined in March, there are three major roadblocks to driverless cars. And the most important one is a biggie…
Can we really trust robots to take the wheel?
A recent Associated Press investigation will hardly help sway consumer opinion here…

Progress… But at What Cost?

It revealed that four of Google’s 48 self-driving vehicles licensed to operate on California roads were involved in minor fender benders.
Two of those accidents reportedly occurred with the vehicles in self-driving mode.
What’s more, the California DMV only started issuing permits for self-driving cars about eight months ago… yet Google’s driverless cars have been on the road for six years.
That means the DMV stats mostly likely understate the number of actual accidents.
Sure enough, Google responded to the AP report by revealing that its cars have been in 11 total accidents.
“Light damage, no injuries,” quipped Google.
Seven involved Google’s cars being rear-ended, two involved Google’s cars being sideswiped, and another involved a car traveling through a stop sign. (Details on the 11thaccident weren’t provided.)
Did you catch the PR spin in there?
If not, here it is more blatantly from Google: “Not once was the self-driving car the cause of the accident.”
And that’s the rub here. Google understands that public opinion matters. If people start distrusting the safety of driverless cars, it’ll set development back… commercialization will take longer… and profits will be delayed.
So with Google’s self-driving cars hitting the road in earnest this summer, the stage is set for a potential PR nightmare, as the opportunity for more accidents naturally increases.
But any backlash over more accidents would be completely unjustified. Let me explain…

Putting the Data Into Perspective

From a practical perspective, we should expect driving robots to have the advantage over us lowly humans.
After all, they don’t try to multitask and use a smartphone like we do. According to the latest National Occupant Protection Use Survey, at any given moment, 660,000 drivers in America are using cellphones while driving.
Take a look at this horrifying chart… 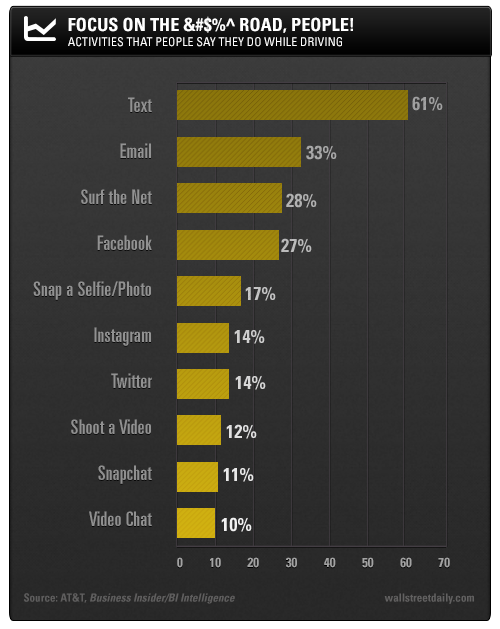 But driverless cars don’t get distracted by such idle entertainment.
And they don’t drive drunk, either, because… well, they can’t!
As Singularity Hub’s Jason Dorrier concludes, “They’ll beat us in attention, vision, and spatial awareness every time.”
He’s not kidding, either. It’s physically impossible for us to match the specifications of even current generation self-driving cars, never mind future ones.
Take Google’s self-driving cars, for instance. They boast “360-degree visibility and 100% attention in all directions at all times.” And embedded sensors can track moving objects (vehicles, cyclists, and pedestrians) from “nearly two football fields” away.
Nevertheless, accidents are still bound to happen, right?
So for arguments’ sake, let’s assume all 11 of Google’s accidents were the cars’ fault. Does that make the risks of advancing the technology too great? Not exactly.
Google’s self-driving cars have logged a total of 1.7 million miles, which works out to an accident rate of 0.6 per 100,000 miles driven.
That’s pretty darn close to the rate for human drivers of 0.3 accidents per 100,000 miles driven, according to the National Highway Traffic Safety Administration.
And remember… the self-driving car trend is still in its infancy. Yet the robots’ capabilities are already on par with humans.
Over time, driverless car technology will inevitably advance and improve. Accordingly, so will the safety record.
Right now, 22% of consumers are already interested in buying a self-driving car, as long as safety and reliability concerns are solved, according to a recent Harris survey.
Boosting that number promises to be more of a public relations problem, not a technology one – something that Google is tackling head-on at the moment.
So buckle up! And rest assured, we’ll keep you up to date on the latest developments.
Courtesy Louis Basenese, Chief Technology Analyst, Wall Street Daily (Article Archive Here)
P.S. As it stands now, there are only about 70 self-driving cars worldwide. And they’re all prototypes. But experts expect approximately 180,000 driverless cars to be on the road by 2020. Even then, it’ll be a small fraction of the overall auto market, which is expected to sell over 85 million vehicles this year – but make no mistake, this market is growing fast. 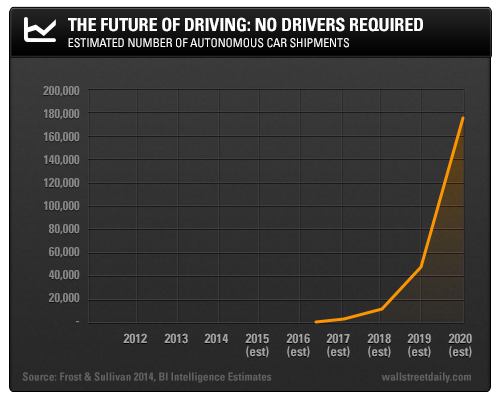