Shares of Goldman Sachs Group Inc (NYSE:GS) are trading at seven year highs heading into the bank’s Thursday morning earnings report. Surprisingly expectations are tame compared to recent levels which could present further opportunity to the upside if the company beats estimates as it typically does. 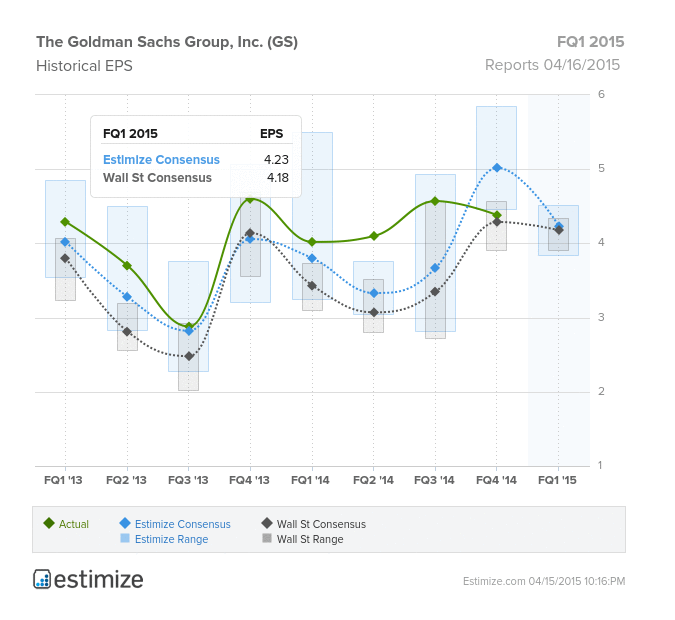 Contributing analysts on Estimize are forecasting $4.23 in earnings per share. The Wall Street estimate is that Goldman will be rake in $4.18 per share. Both groups expect at least a 4% improvement compared to the $4.02 reported for the first quarter of last year.

This quarter the differential between Wall Street and Estimize is very small compared to historical differences. Over the past year the average separation between consensuses has been 34 cents per share. 7 times out of the past 8 Goldman has beaten both estimates. This quarter we’re only seeing a 5 cent difference, signaling relatively low market expectations.

Goldman Sachs’s only earnings miss in the past two years came in January when Estimize contributors set the bar high only to be disappointed. Goldman failed to reach even the lowest of the 67 estimates submitted last quarter.

Even after factoring in last quarter’s stumble Goldman has still averaged a 31 cent beat against the Estimize consensus over the past year. Investors normally expect the bulge bracket bank to crush the expectations set forth by other analysts on Wall Street and it almost always does.