Her stilettos flashing and iPhone snapping selfies, Kim Kardashian is racing out in front, with Deer Hunter close behind, and Racing Rivals bringing up the rear. But wait. No, no. It can’t be. Yes, yes, America’s dashing diva is slowing now as, in one fell swoop, she whips out a tiny mirror, smears pink lip plumper on that famous kisser and checks out the scenery behind her. Slowing, slowing, slowing. Stumble.

In the wacky world of mobile game making, Glu Mobile Inc. (NASDAQ:GLUU) is in a constant mad dash for gamers’ hearts and fingertips.

And that decline is just the first warning flag amid a mile-long parade of red flags viciously snapping at Glu.

The company has not responded to TheStreetSweeper’s request for comment, but investors may find other viewpoints here.

Indeed, we believe Glu shares are poised to decline faster than a broken stiletto can drop any dashing diva. Here’s why. 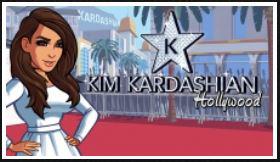 Altogether, the trio infused Glu with about 60 percent of its total revenue. 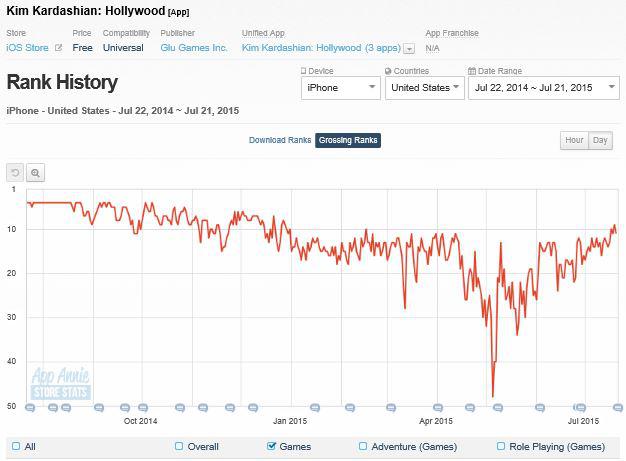 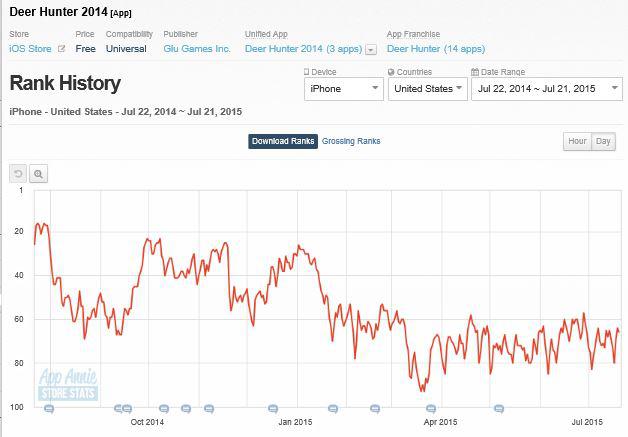 The chart below shows the downward trend for Racing Rivals, as well. 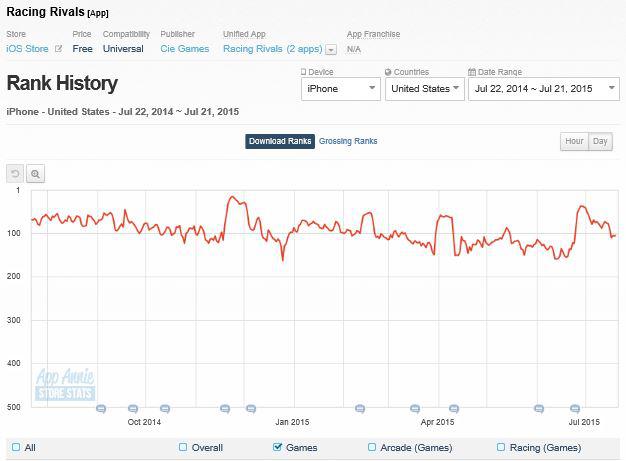 Comments made during the earnings call in April by CEO Niccolo de Masi suggest dependence on those titles: “Our Q1 outperformance was underpinned by the continued success of our three largest titles. Kim Kardashian: Hollywood, Deer Hunter 2014 and Racing Rivals.”

But what does the charted slow decline of these three titles suggest about the third quarter? Armed with those charts plus other publicly available documents, investors can see the chinks in the armor.

Glu Mobile is racing to launch 15 new games this year. Analyzing data from App Annie gives us an idea of the performance of recent releases. 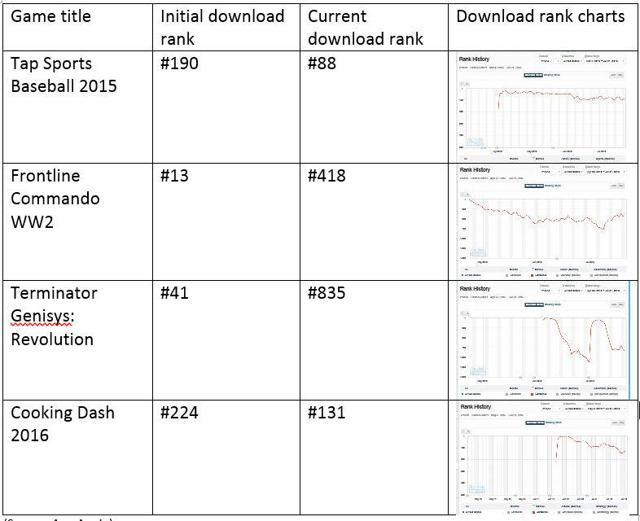 And the blah standing in the popularity contest points to yet another negative for these new titles.

Significantly, none of the games are turning in good numbers in the “grossing rank.” This ranks each games’ gross revenue generated in the app store.

The grossing rank ranges from Tap Sports Baseball 2015 in #34.

(Terminator’s ranking is particularly poor considering the Terminator movie last weekend machine-gunned its way to #6 at the box office).

Here’s the deal: A game usually needs to rank 10 or higher in “grossing rank” in order to generate meaningful revenue.

The chart by Glomo Investing supports that top 10 requirement idea. 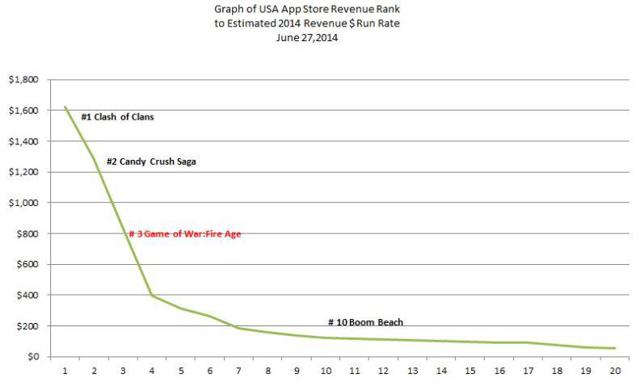 So, both download rank and grossing rank look rather sickly for Glu’s new games.

With just a few, relatively low-performers out the gate, Glu Mobile will need to ditch its stilettos and run like crazy to release about seven more titles in the second half of the year – and those must win many more downloads.

Mission Impossible: New US Results Hint This Message Will Self-Destruct

A new movie and long-ago television smash hit like “Mission Impossible” should translate to the perfect game to satisfy Glu’s needs just about now. Geeks and geek-ettes may want to check out the trailer, here, for Glu’s new game, “Mission Impossible: Rogue Nation.”

But the trailer may be far more exciting than the actual game. The Mission Impossible game launched in the United States on July 16 and investors can see the disappointing results so far: 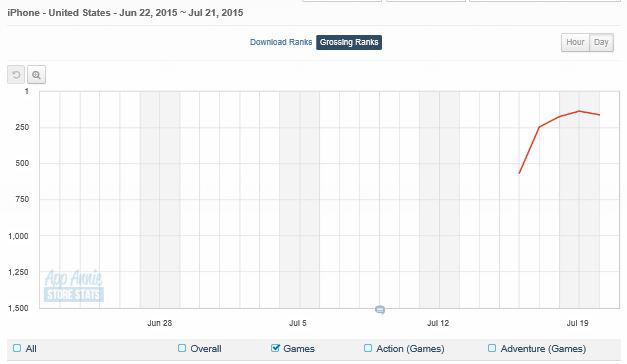 The gross ranking peaked at only #137 and then retreated to #162. Those just aren’t blockbuster numbers at this point.

The game falls way, way below that benchmark ranking of # 10 or higher. So it isn’t making a lot of money.

Looking at downloads, as shown below, Mission Impossible unsurprisingly enjoyed an initial spike followed by tapering: 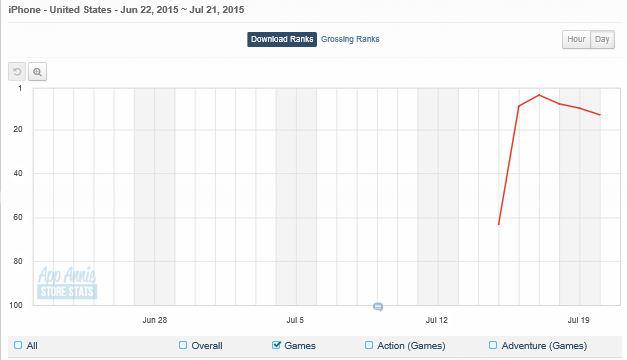 Mission Impossible needs to be virtually blowing the fingers off gamers. Instead, game players seem to consider it just another first-person-shooter (FPS) game in a crowded niche that’s beginning to grow tired.

So early results are surprisingly disappointing. 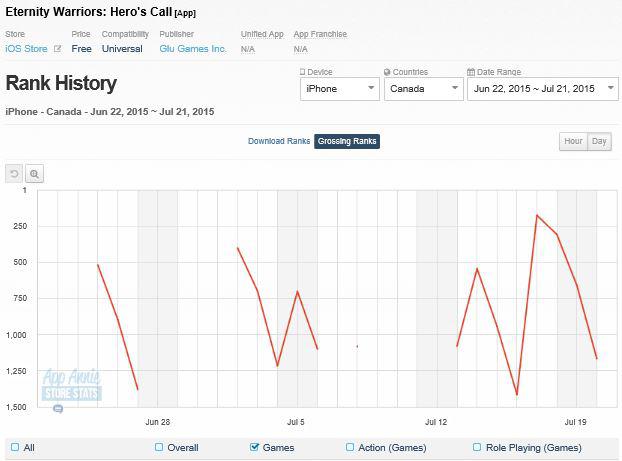 How about the “Sniper X: Kill Confirmed” soft-launch in Austria? 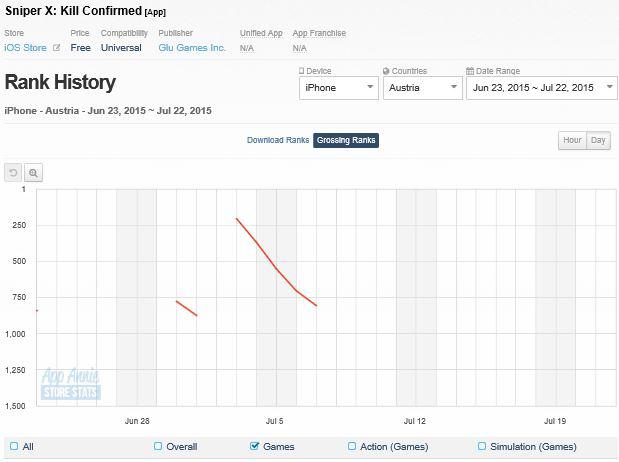 So the chart above clearly shows the downward trend of the “Sniper X” soft-launch.

Analysts are predicting negatives – a $0.04 earnings loss next quarter and an 11.7 percent decline in sales the following quarter, shown here. But the 2015 games appear poised to disappoint gamers, investors and the very analysts predicting such poor earnings.

Glu Mobile director Hany Nada and GGV Capital have been dumping their shares.

This is particularly significant because Mr. Nada not only invested in Glu early on. He also actually led Glu’s Series D funding and participated in the initial public offering.

And GGV Capital, or Granite Global Ventures Capital, was a top 10 Glu investor. But no more.

The director and his fund likely know Glu better than anyone.

Bulls assume Glu is on the verge of excellent revenue and significant growth in 2016 amid titles the CEO said will bereleased late in the fall featuring Katy Perry, Kendall and Kylie Jenner and Britney Spears.

So why on earth would the most knowledgeable, long-time investor – Granite Global Ventures – keep Glu through the tougher times, as indicated by the stock chart below …

And why would that investor boot Glu now?

So, Granite Global Ventures Capital essentially made the bear case.

Probably the most prevalent theme in the bull thesis is China game distributor Tencent’s recent $126 million investment in Glu Mobile.

Tencent paid $6 per share – just about where shares trade now. We contend the company overpaid.

We see that after years of hanging in there, GGV Capital is now exiting, at prices similar to what Tencent paid to get into Glu.

Additionally, Tencent is a $250 billion market capitalization company that is huge in China. So even if Glu’s value doubled – or if it dropped in half – Tencent wouldn’t really care too much.

That’s because Tencent needs more mobile games just to sustain its valuation. In fact, the mobile game distributor regularly acquires stakes in other companies and recently crafted an agreement with another company that was bigger than the Glu deal.

If Kim and Friends Are Losing Steam, What Will Tomorrow Hold?

So we believe the consensus expectation of $75 million in third quarter sales is too high. We expect Glu will squeeze past the second quarter but be forced to reduce third quarter guidance and potentially the entire year.

So, here’s how it looks.

We assume sales stay flat from the first quarter – driven primarily by the big three: Kim Kardashian, Deer Hunter and Racing Rivals – into the third quarter.

Top games – but not mega hits – generate about $1.65 million in sales per quarter, as shown in Glu Mobile’s chart, below:

That figure means Glu Mobile will need to release seven games in the third quarter, each performing as well as Robocop and Contract Killer Sniper – a tough target to hit.

Overall, we expect Glu’s stock price to stumble and dive – much like the tumbles Kim Kardashian has endured – from today’s $6.30 to about $4 per share near-term.

Important Disclosure: The owners of TheStreetSweeper hold a short position in GLUU and stand to profit on any future declines in the stock price.