Anyone remotely following the gold market, knows that the East is deeply connected with metals. They rightly believe that they are a safe store of value and have a deep affinity that has lasted throughout the ages. 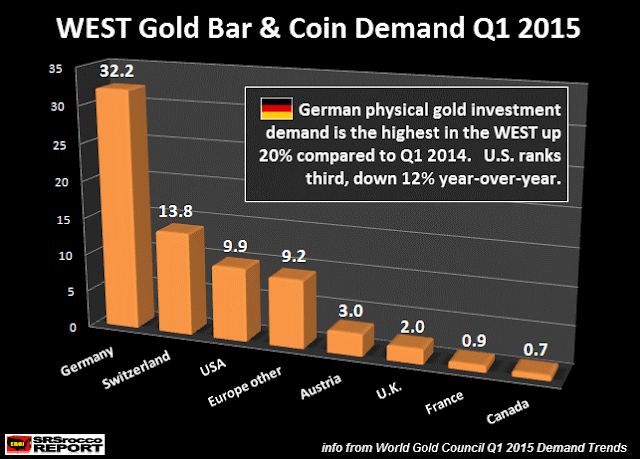 China, India and Russia are three major sources of gold demand and will continue to be so going forward into the future as they quietly behind the scenes continue to make deals that will eventually displace the US dollar as the reserve currency of the world.
Yet, what is not quite as well known is that despite the mainstream media’s attempts to tarnish the yellow metal and precious metals in general, it simply is not working. Western demand, although not as intense as the East, continues on with private investors and certain nation states, as more and more people begin to realize the importance of having a portion of your hard earned savings in a tangible asset, such as gold and silver.
Two Western countries that are still deeply invested in gold is Switzerland and Germany, but how much demand do these two countries have for precious metals. The Swiss, who have always been closely associated with money, had significant demand for gold in the first quart of 2015, showing demand of 13.8 metric tonnes.
Yet, this was nothing compared to Germany, which as the SRSrocco Report above shows, is blowing the rest of the West away in the race for ownership of the yellow metal.
Germany, in the first Quarter of 2015 saw a staggering demand of 32.2 metric tonnes of gold! What is more shocking is what this looks like compared to the rest of the Western nations (see chart).
As can be seen from the chart, Germany is accumulating gold at a rapid pace, seeing an increase of 20% over last year’s demand and twelve times faster than that of the United States!
When compared to the entirety of the rest of the West, Germany is accumulating roughly 45% of the entire Western gold production.
What does Germany know that others in the West don’t? Perhaps they simply can see the writing on the wall and don’t like what they see, the never ending production of fiat money can only end one way and one way alone, hyperinflation. Clearly, the Germans have not forgotten their history.
Research Report
analyst ratings
blogger opinions
investor sentiment
news sentiment
analyst ratings
insider activity
hedge funds
stats charts
You May Also Like