By The Financial Canadian

When thinking about significant changes to the U.S. economy that happened in 2016, the first thing many people will think of the is Presidential Election that occurred on November 8th, 2016.

Among other things, one of the significant changes after this election cycle will be the boost in military and defense spending.

What if there was a way to profit in these changes to government spending?

Let’s exlore how to profit from the boost in defense spending with General Dynamics Corporation (NYSE:GD) – one of the nation’s largest military, defense, and aerospace companies:

General Dynamics was incorporated in Delaware in 1952 and grew steadily until the 1990s, when the company sold nearly all of their businesses to focus on core strategies. Since then, the company has grown organically and via the acquisition of various combat- and IT-related companies along with Gulfstream Aerospace Corporation.

Today, General Dynamics is one of the largest aerospace and military defense contractors in the world. Based on market capitalization, there are only a few companies larger than GD in the Aerospace & Defense industry:

Over the long-run, General Dynamics has done a fantastic job of compounding their earnings on a per-share basis. 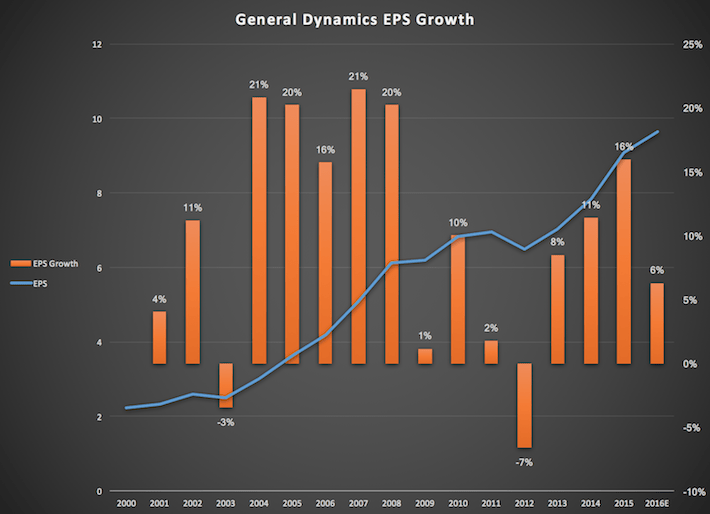 General Dynamics has also rewarded shareholders by delivering heaps of cash in the form of dividends. 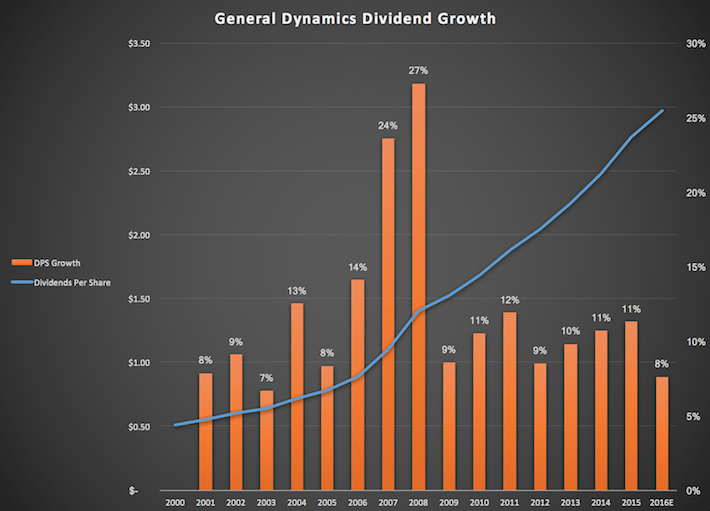 The company has grown their dividend even faster than their earnings. The cumulative increase from $0.51 per share in 2000 to $2.97 per share in 2016 represents a CAGR of 11.6%. Impressive growth indeed.

Going forward, there are numerous drivers of growth for General Dynamics. This will ensure that adequate returns will continue for investors in the future.

First of all, the defense industry is expected to be one of the largest beneficiaries of the new Trump administration. The President-Elects policies are expected to include significant budget boosts to national defense, surveillance, and intelligence products, which are all positive for General Dynamics.

This has been reflected in GD’s stock price since the election results were announced. 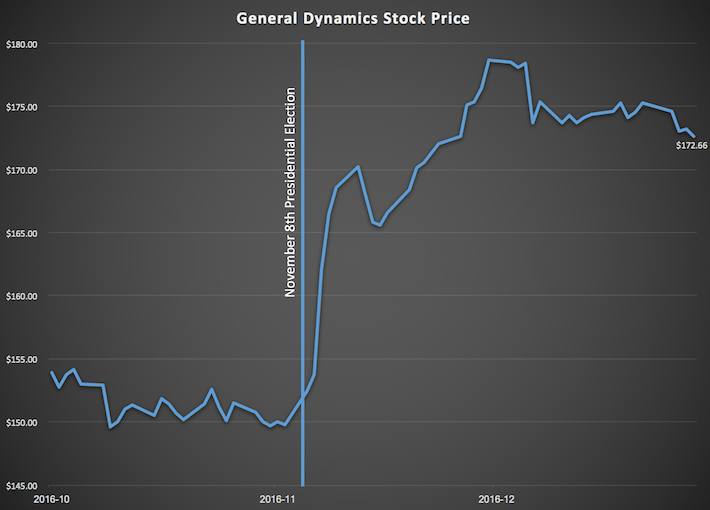 General Dynamics stock has surged since the November 8 Presidential Election.

Beyond that, General Dynamics’ growth will occur through a mix of new government contracts and business with private sector counterparties.

Noting that this is only for one quarter and business segment, it appears that business continues to boom for this soon-to-be Dividend Aristocrat.

As a defense contractor, General Dynamics deals with counterparties such as the U.S. Navy, the U.S. military, and the U.S. Marine Corps. Earnings are based on long-term contracts which reduces their earnings volatility.

In fiscal 2015, U.S. Government contracts represented 57% of their total revenues. 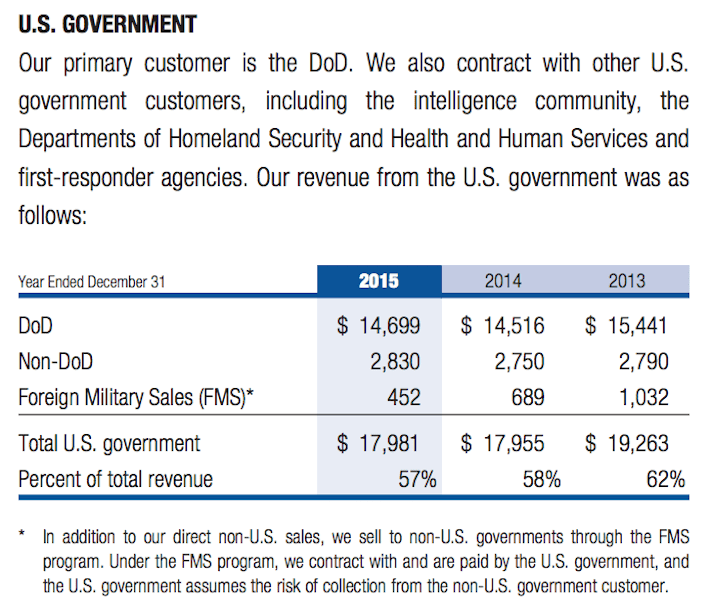 General Dynamics also has a long backlog of business which has been contracted but not yet completed or paid for. Their ~$52 billion backlog at the end of fiscal 2015 is much higher than fiscal 2015’s $31 billion of revenues.

This means that in theory, General Dynamics could continue to operate even if they fail to write new business (which is unlikely).

This backlog is also quite stable over time. 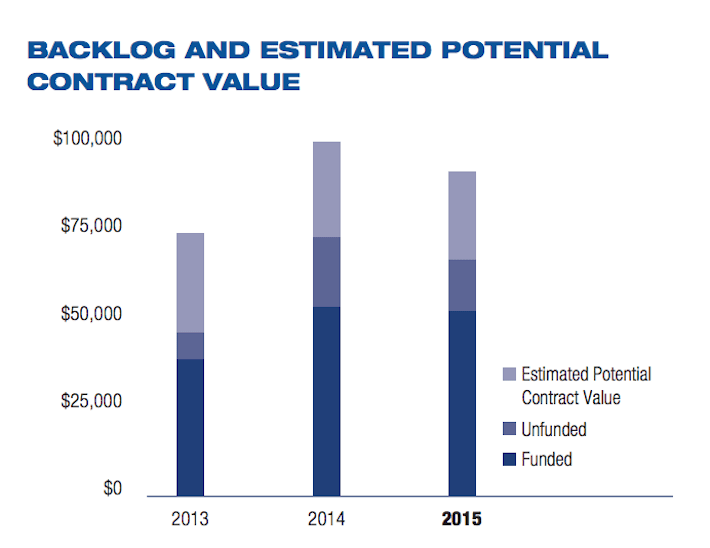 All factors considered, the business model of General Dynamics lends itself well to investment from the risk-conscious investor. This was reflected in the company’s performance during the 2008-2009 financial crisis. Here is a snapshot of their EPS:

General Dynamics did not experience a single year of negative earnings growth during the financial crisis. This is a testament to the ability of this stock to weather recessions.

The following diagram displays how this is above GD’s historical valuation levels. 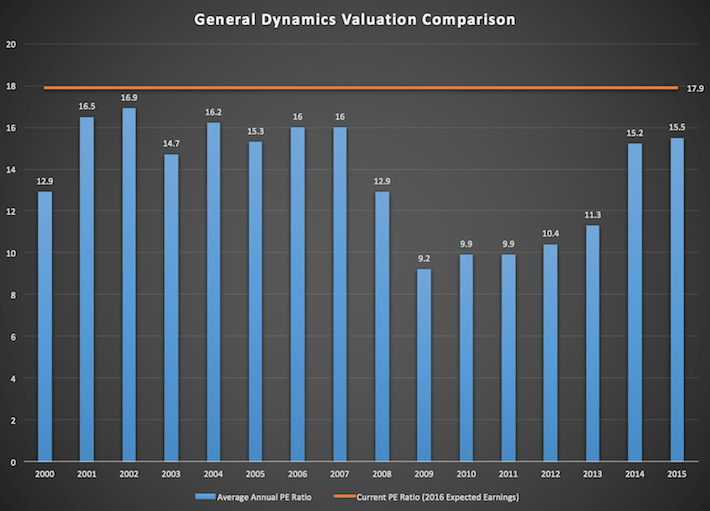 The stock should eventually fall to a more normalized level, and this will be a detractor from future shareholder returns. Value-conscious investor might be better off waiting for a better entry point.

Other than changes in valuation, General Dynamics shareholder returns will be composed of share buybacks, dividend yield, and earnings growth.

General Dynamics has been a steady repurchase of stock over recent years. In fiscal 2015 alone, the company repurchased $3.2 billion of stock, representing approximately 6% of today’s market cap. Since 2012, the company has reduced their number of shares outstanding by 12%, an impressive feat.

Buybacks are currently slowing down for General Dynamics. The company repurchased only 3.2 million shares for $348 million in Q3 and year-to-date, the share repurchase program has been roughly cut in half from the year before.

Never the less, share repurchases will still be a contributor to future shareholder returns.

The company has a current dividend yield of ~1.7%, which although not particularly high, has plenty of room to grow. Based on 2016’s expected numbers, General Dynamics is paying $2.97 in dividends from $9.65 of earnings for a payout ratio of 30.8%. This leaves plenty of upside for income-oriented investors.

The company has a long-term goal of double-digit earnings growth, which combined with their historic 9.6% EPS CAGR makes me comfortable expecting EPS growth in the range of 7%-9%. This will be boosted by share buybacks.

Overall, total shareholders returns for General Dynamics are expected to be in the range of 8.7%-10.7%, consisting of the following:

These are maximum estimates, though, and will almost certainly be reduced by future contraction of the stock’s valuation.

General Dynamics operates in an industry with a wide economic moat and a distinct competitive advantage. These are Buffett-esque qualities that should be appreciated by investors.

“The key to investing is not assessing how much an industry is going to affect society, or how much it will grow, but rather determining the competitive advantage of any given company and, above all, the durability of that advantage.”
– Warren Buffett

They also pay a rising dividend with a low payout ratio and steady earnings growth.

The company has an above average rank using The 8 Rules of Dividend Investing. Despite this, General Dynamics is trading above historical valuations. Investors might be better off to wait for an attractive entry point to invest in this great business.