From Big Oil to Big Gas? 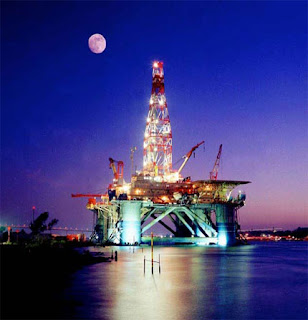 By Rakteem Katakey
Oil companies that have pumped trillions of barrels of crude from the ground are now saying the future is in their other main product: natural gas, a fuel they’re promoting as the logical successor to coal.
With almost 200 nations set to hammer out a binding pact on carbon emissions in December, fossil-fuel companies led by Royal Dutch Shell Plc and Total SA say they’re refocusing on gas as a cleaner alternative to the cheap coal that now dominates electricity generation worldwide.
That’s sparked a war of words between the two industries and raised concern that Big Oil is more interested in grabbing market share then fighting global warming.
“Total is gas, and gas is good,” Chief Executive Officer Patrick Pouyanne said Monday, in advance of this week’s World Gas Conference in Paris. His remarks echoed comments two weeks earlier by Shell CEO Ben Van Beurden, who said his company has changed from “an oil-and-gas company to a gas-and-oil company.”
Shell began producing more gas than oil in 2013 and Total the following year. Exxon Mobil Corp.’s output rose to about 47 percent of total production last year from 39 percent six years ago. Companies are pushing sales in China, India and Europe.
Coal from producers led by Glencore Plc and BHP Billiton Ltd. produces about 40 percent of the world’s electricity. Shell, Total, BP Plc and other oil companies said Monday in a joint statement that they’re banding together to promote gas as more climate friendly than coal.
‘The Enemy’
“The enemy is coal,” Pouyanne said Monday. He vowed to pull out of coal mining and said Total may also halt coal trading in Europe.
A key strategy for gas producers to push this agenda is asking governments to levy a price on carbon emissions from power plants. That creates an economic incentive to switch from coal, the top source of greenhouse gases, to cleaner options.
BP CEO Bob Dudley called for a carbon price at the company’s shareholder meeting April 16, while Exxon head Rex Tillerson on May 27 reiterated support for a carbon tax if consensus emerges in the U.S.
Dudley, Tillerson, Pouyanne, Van Beurden and Statoil ASA’s chief Eldar Saetre will join Chevron Corp. head John Watson at the conference in Paris this week to discuss ways to promote gas as the main fuel for a clean and sustainable world.
Shifting Focus
“They promote gas because it’s already part of their business,” said Michael Barron, director of global energy and natural resources at the risk adviser Eurasia Group. “In many ways gas makes a contribution to moving toward a lower carbon economy. But it’ll all depend on the economics.”
Drilling for oil often yields both crude and gas, and in recent years the major producers have stepped up their focus on gas. That shift is accelerating, with billions spent on adding to gas operations, which have historically generated less money than oil.
“More gas is the absolute key,” Shell’s Van Beurden told shareholders at the company’s annual meeting May 21.
In April, Shell agreed to pay $70 billion to buy BG Group Plc, mainly a gas company. Exxon is starting gas fields and liquefied natural gas export projects in Papua New Guinea to supply Asia, and Total is investing in Russia.
Carbon Emissions
“Coal is not the target,” said Joan MacNaughton, who served as executive chair of a World Energy Council climate-change report released last month. “The target should be emissions. It’s true that gas is half as emitting as coal. You could say it’s twice as clean, or you could say it’s just half as dirty.”
Big Oil still has its work cut out, given the economics of coal. In fast-growing Asia, which accounts for about 70 percent of world coal use, prices for the fuel have declined every year since 2011, driving down costs for electricity.
“It’s a question of affordability,” said Philip Garner, director general of the U.K. trade group CoalPro. “Coal is a much more abundant resource than oil and gas, and countries that have it can’t be asked to stop using it because more than a billion people still live without electricity.”
Coal-fired power must drop to about 30 percent of global generation by 2025 to meet a goal of limiting the increase in global temperature to 2 degrees Celsius (3.6 degrees Fahrenheit), according to the International Energy Agency.
Carbon Capture
Coal companies are betting on carbon capture and storage, which vacuums out carbon dioxide before it enters the atmosphere, to keep themselves in business in the face of demands for cleaner energy, Garner said. Technologies that clean coal of impurities will also be a part of the industry’s defense.
Development of CCS technology, as yet commercially unproven for power generation, may offer a way out of the dilemma between meeting growing demand for cheap electricity in the poorest nations, while preventing a climate disaster.
“All this focus on coal versus gas has taken away all the attention from CCS and has done a lot of damage on climate change,” MacNaughton said. While “switching to gas gives some benefits in the short to medium term,” European Union emissions in 2035 will be higher from gas-fired power than coal, she said.