Here are some of the biggest movers in the market today, for better or for worse: Interpace Diagnostics Group Inc (NASDAQ:IDXG), Synergy Pharmaceuticals Inc (NASDAQ:SGYP), and Restoration Hardware Holdings Inc (NYSE:RH). Whereas Synergy and Interpace are riding a positive tide of encouraging clinical progress and solidifying a key deal, respectively, Restoration’s quarterly financial results are found to ultimately be a negative driver for shares. Let’s explore.

Interpace shares are surging ahead almost 40% today on back of yesterday’s announcement that the third largest health plan in the U.S., Aetna has agreed to cover the firm’s ThyraMir test for Aetna’s total 46 million members across the nation, with coverage to be effective immediately.

Additionally, IDXG notes that its ThyGenX and Thyra Mir tests will also now be covered for more than 200 million patients nationally, which includes Medicare, National, and Regional health plans.

Interpace President and CEO Jack E. Stover weighs in as to what this means for his company, opining, “The acceptance by Aetna to cover both ThyGenX and ThyraMir is further support of the clinical utility as well as clinical validity of our combined thyroid assays. We are pleased that Aetna has joined the growing list of health plans that cover ThyraMir and that their 46 million members will now have access to the benefits of the ThyGenX – ThyraMir test combination.”

The American Cancer Society has found thyroid cancer to be the most accelerating kind of cancer in the U.S., charging at a triple pace in the past thirty years. When thyroid nodule biopsy results are not palpably benign or malignant, physicians have been known to opt for thyroid surgery as the solution. But what of these outcomes? As it turns out, upon operation, 70% to 80% of these nodules are ruled to be benign. Therefore, IDXG’s tests have the power to cut back on avoidable surgeries for patients with grey cases. 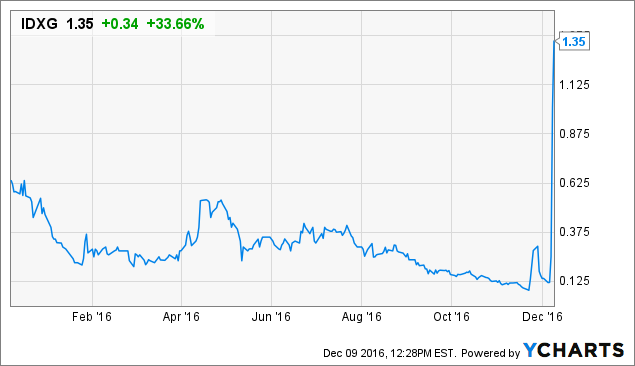 Synergy are rising 3% today after exciting investors with new pivotal clinical progress. Of the two Phase III trials evaluating the safety and efficacy of pipeline drug plecanatide, the firm has made a huge stride for the indication in constipation-predominant irritable bowel syndrome, or IBS-C.

The data read-out has shown that the drug achieved its primary endpoint of statistical significance in regards to the overall response rate for patients at week 12.

Chairman and CEO of Synergy Dr. Gary S. Jacob has reason to celebrate, asserting, “These data reinforce our strong belief that plecanatide may represent an important new treatment option for the millions of patients currently suffering from IBS-C. We look forward to the results of our second phase 3 IBS-C trial with plecanatide later this month.”

With a decision waiting in the wings as the agency reviews plecanatide in chronic idiopathic constipation (CIC), this was a major favorable step forward for the biotech firm. Additionally, the company has a PDUFA target action date set for January 29, 2017. If all goes according as SGYP hopes and plans, with an approval come January, the firm can then proceed to file an sNDA for plecanatide in IBS-C by the first quarter of 2017.

TipRanks analytics demonstrate SGYP as a Strong Buy. Out of 3 analysts polled in the last 3 months by TipRanks, all 3 are bullish on Synergy stock. With a return potential of nearly 140%, the stock’s consensus target price stands at $13.00.

Restoration shares are on a close to 16% nosedive today after posting a third-quarter financial print with guidance that has come up short of expectations.

A silver lining for the company lies in third-quarter earnings performance, with EPS of $0.20 outperforming the analyst estimate of $0.16, along with revenue of $549 million reaching ahead of consensus at $527.13 million.

However, comparable brand revenues dipped 6%, which when juxtaposed with a 7% rise in the previous year is quite a hit for the company.

RH Chairman and Chief Executive Officer Gary Friedman is aware of his company’s challenges, explaining, “As previously communicated, we are making several strategic investments and changes to our business model in fiscal 2016 that are temporarily depressing financial results in the short term, that we believe will strengthen our brand and position the business for accelerated growth in 2017 and beyond. These temporal issues include the costs related to the launch of RH Modern; the timing of recognizing membership revenues related to the transition from a promotional to a membership model; efforts to reduce inventories and rationalize our SKU count; and the decision to push our 2016 Source Book mailing from the Spring to the Fall.”

TipRanks analytics indicate RH as a Buy. Based on 6 analysts polled in the last 3 months, 2 rate a Buy on RH stock, while 4 maintain a Hold. The 12-month average price target stands at $45.00, marking a 35% upside from where the shares last closed.