The world is on the brink of the longest-lasting oil glut in at least three decades and OPEC’s quest for market share makes it almost unavoidable, according to Bloomberg. 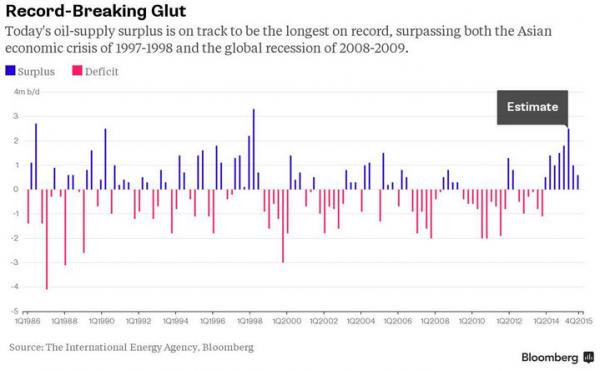 Oil supply has exceeded demand globally for the past five quarters, already the most enduring glut since the 1997 Asian economic crisis, International Energy Agency data show.
But as WolfStreet.com’s Wolf Richter warns, if Iran and world powers reach an accord on the Islamic Republic’s nuclear program by their June 30 deadline, we’ll be watching the most magnificent oil glut ever building up into next year.
“The market is flooded with oil and everyone is desperate to sell quickly, so you have a price war,” a marine-fuel trader in Singapore, the largest ship refueling hub in the world, told Reuters as prices for bunker fuel oil are plunging.
OPEC, which produces about 40% of global oil supply, announced on June 5 to “maintain” output at 30 million barrels per day for the next six months. Six days later, the IEA’s Oil Market Report for June clarified that “Saudi Arabia, Iraq, and the United Arab Emirates pumped at record monthly rates” in May and boosted OPEC output to 31.3 million barrels per day, the highest since October 2012, and over 1 MMbpd above target for the third month in a row. OPEC will likely continue pumping at this rate “in coming months,” the IEA said.
“We have plenty of crude,” explained Ahmed Al-Subaey, Saudi Aramco’s executive director for marketing while in India to discuss with Indian oil officials supplying additional oil. “You are not going to see any cuts from Saudi Arabia,” he said. Saudi Arabia produced 10.3 MMbpd in May, its highest rate on record.
So forget the long-rumored decline of Saudi oil fields. For Saudi Arabia, it’s a matter of survival. It has cheap oil, and it won’t be pushed into the abyss by high-cost, junk-bond-funded, eternally cash-flow-negative producers in the US. It will defend its market share, and it can do so profitably.
Russian produced 10.71 MMbpd of oil and condensate in May, a hair lower than its post-Soviet record set in January, and within reach of the Soviet record of 11.48 MMbpd set in 1987. Russia is not cutting back either. It needs every foreign-exchange dime it can get. Its oil & gas sector is its economic lifeline.
And US oil producers aren’t backing off either. They idled 60% of their drilling rigs, slashed capital expenditures, laid off tens of thousands of workers, and shut some facilities. A number of companies in the oil patch have filed for bankruptcy. But US producers are pumping more oil than ever before.
Despite wild gyrations in granular production data that might point at a leveling off or even a decline in one or the other oil field, overall US production, based on the weekly estimates by the EIA, soared to 9.61 MMbpd in the week ended June 5. A new all-time record, and up 13.6% from a year ago! Note the relentless trend line: 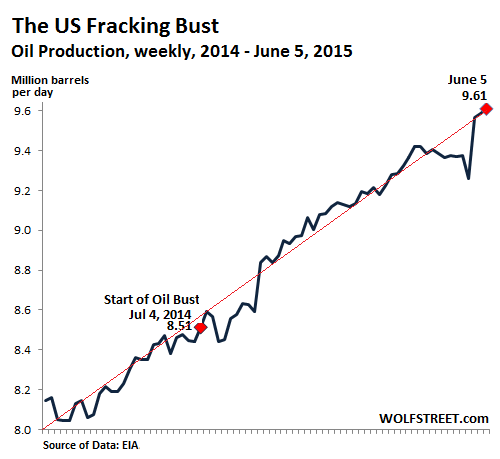 With the world’s top three oil producers – Saudi Arabia, the US, and Russia – pumping at record levels and with OPEC producing above target, miracles would have to happen on the demand side to bring this into balance. But miracles are rare these days.
Over the past decade, China has absorbed 48% of the increase in global oil production. But now its economic growth is slowing and its economy is becoming more energy efficient. Demand in the US and Europe is not performing any miracles either. There is some growth: 1.4 MMbpd for 2015, according to the IEA. But not nearly enough to mop up the additional production from OPEC, Russia, and the US – not to speak of Iran when it rejoins the global oil trade.
So OECD crude oil inventories rose another 12.6 million barrels in May, despite the first draws in the US in nine months. According to Bloomberg, supply has exceeded demand for five quarters in a row, the longest glut since the 1997 Asian economic crisis. Eugen Weinberg, head of commodities research at Commerzbank in Frankfurt, put it this way: “Any expectations the oversupply will be gone by 2016 don’t look justified at this stage.”
If demand grows at 1.4 MMbpd in 2015, and if production remains at current levels – two big IFs – global oversupply would still run at 1 MMbpd in the third quarter and at 600,000 bpd in the fourth quarter, which, according to Bloomberg, would be “the eighth consecutive quarterly surplus, exceeding the current record of six quarters from 1997 to 1998.”
It would be the biggest glut in recorded crude-oil history.
But no production increases in the US may be unlikely. US shale producers can’t afford to keep production level. They’re loaded up with debt that is getting more expensive, creditors are getting antsy, cash flows are negative, and so they have to produce more to get more money and stay alive.
And then there’s Iran. Bloomberg:
The glut could swell further if Iran and world powers reach an accord on the Islamic Republic’s nuclear program by their June 30 deadline, Commerzbank predicts. The country could boost exports by 1 million barrels a day within seven months of sanctions being removed, Oil Minister Bijan Namdar Zanganeh said in Vienna on June 3.
If that happens, we’ll be watching the most magnificent oil glut ever building up into next year.
Research Report
analyst ratings
blogger opinions
investor sentiment
news sentiment
analyst ratings
insider activity
hedge funds
stats charts
You May Also Like