The Federal Reserve threw investors a curve ball last week.  Until then, Fed officials have shown a clear preference for survey-based measures of inflation expectations.  Last week, seemingly out of the blue that Fed made reference to market-based measures of inflation expectations.  It implied that the decline in the break-evens (difference between conventional and inflation-linked bond yields) got officials’ attention.

This is what we mean by temporal inconsistencies, and why anticipating what the Fed will do is so difficult.  There are two basic ways to measure inflation expectations, surveys and market-based.  The Fed showed a preference for one and then cited the other.

The accuracy of the break-evens and market-based measures, in general, at forecasting future inflation needs to be asked.    Not coincidentally, within two business days of the FOMC decision, two economists at the San Francisco Fed issued a brief noteanswering the question.

The short answer is that market-based measures are the poorest predictors of future inflation.  The San Fran Fed’s economists compare market-based measures (break evens and inflation swap rates) with surveys of professionals (the Fed conducts a Survey of Professional Forecasters and the Blue Chip Financial Forecasts) and methods including an unchanged forecast and a forecast that assumes the Fed inflation target is reached.  In many ways, the results are not surprising.  They confirm the findings of a body of economic research that finds market-based measures of inflation expectations are not particularly accurate, and that superior methods are readily available. 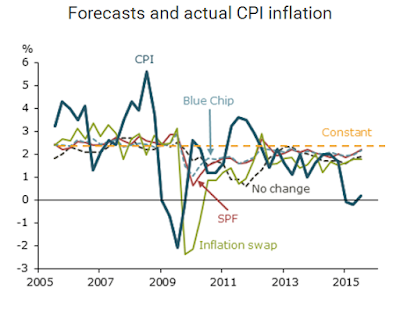 Here are the results of the San Francisco Fed economists’ study.   The economists issue the necessary caveats about the sample size and the volatility of the results.  However, due to how the research was conducted, they conclude that their results “appear quite robust.”

They conclude:  “We find that market-based measures of inflation are poor predictors of future inflation. In particular, they perform much worse than forecasts constructed from survey expectations of future inflation, which incorporate all the information used by professional forecasters. Interestingly, a simple constant inflation rate corresponding to the Federal Reserve’s 2% inflation target consistently performs best.”

By nearly any metric one chooses there has been substantial improvement in the labor market.  This is not to deny that there is scope for more improvement, but to contrast it with the lack of significant progress toward the Fed’s price stability objective.  Various Fed officials have formally and informally embraced some version of the Phillips Curve, which posits that over time a tight labor market will boost prices.   So while low inflation may be worrisome, until last week, the majority of Fed officials appeared to be willing to look past it.

How to square the circle?  Remember Volcker tightening of monetary policy to squeeze out double digit inflation in the late-1970s and early-1980s despite high unemployment and a weak economy.  He justified the action by citing some “objective” monetary principle that was driving policy.  It provided the cover to do what he wanted to do in the first place.

Perhaps it is the same with the Yellen Fed.  The events in China and the potential knock-on effects on other important US trading partners and commodities spooked officials.  The vast majority wanted to err on the side of prudence, even though Yellen argued against exaggerating the importance of the precise timing of the lift-off in favor of appreciating the gradual nature and limited scope of this monetary cycle.   As several officials have since acknowledged, it was a close call.

Political considerations suggested that a domestic reason be given for the hesitancy.  The lack of substantial progress on the price stability mandate was readily available.  The Fed overstated its case by citing market-based measures of inflation expectations.  And the San Fran Fed economists called it out.    This means that the Fed may raise rates regardless of what happens to the market-based measures of inflation expectations in the coming months.