Could The Fed Trigger A Deflationary Slide In Stocks? 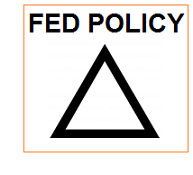 In Tuesday’s Wall Street Journal, a reporter with excellent contacts at the Fed, Jon Hilsenrath, penned the following:

Federal Reserve officials are seriously considering an important shift in tone at their policy meeting next week: dropping an assurance that short-term interest rates will stay near zero for a “considerable time” as they look more confidently toward rate increases around the middle of next year.

Is The Market Really Worried About Inflation?

As noted recently, inflation expectations are what ultimately determine interest rates. It is difficult to believe the market is expecting widespread price increases when crude oil (NYSEARCA:USO) is dropping like a stone. As shown in the chart below, oil has plummeted more than 40% over the past six months. While the Fed looks at many factors when considering a shift in interest rate policy, it is difficult to make the case that longer-term inflation expectations are becoming problematic. In fact, our friends across the pond are concerned about deflationary, rather than inflationary, forces. From Reuters/The Fiscal Times:

French core inflation turned negative in November, with the first drop in the indicator since records started in 1990 pointing to a growing risk of deflation in the euro zone’s second-largest economy.

During Wednesday’s big sell-off, we noted (see tweet) it was possible stocks would find their footing near support. During the early stages of Thursday’s trading day, buyers did step in at a logical level. The S&P 500 (NYSEARCA:SPY) chart below is an updated version of the one tweeted Wednesday. Before stocks can push higher, they must clear a short-term resistance hurdle near 2055. The market will be looking to see if the Fed drops the phrase “considerable time” from their upcoming December 17 statement. Changing the language would increase the odds of an interest rate hike coming in the next six months, something that could spook the stock and bond markets.

The Reaction Is More Important Than The Statement

Rather than attempting to anticipate the market’s reaction to next week’s Fed statement, our approach will be to remain patient and wait to see the actions of market participants after the release of the Fed’s December 17 statement. If considerable time is dropped, will the market take the “this is bad news because rates will be moving higher” approach or “this is good news because the economy is gaining positive momentum” approach? Time will tell.

U.S. Equity Market Week In Review For The Week Of January 19-23: The Consolidation Continues

Market Sell Off: Is It Time To Panic?

Hard To Say This Is Bearish