All Eyes on QUALCOMM, Inc. (QCOM) Ahead of Earnings This Evening

QUALCOMM, Inc. (NASDAQ:QCOM) prepares to announce fiscal first quarter results this evening. More importantly the report and subsequent conference call gives management an opportunity to address the newest round of controversy. Late last week news broke that Apple filed a $1 billion lawsuit against Qualcomm that questions the validity of their royalties agreement. Apple claimed that Qualcomm collected royalties on technologies not associated with the chipmaker. The report followed with a swift sell off and newfound concerns over the outlook of fiscal 2017 For the first quarter, analysts at Estimize expect earnings of $1.26 per share, about 27% higher than the same period last year. That estimate increased by 4% since Qualcomm’s most recent report 3 months ago. Revenue for the period is expected to increase by 7% to $6.23 billion, marking 3 consecutive quarters of positive growth.

Unfortunately investor sentiment turned pessimistic after news of the lawsuit broke, causing shares to plummet 18% in the past 3 months. Historically shares consistently perform poorly immediately through the print and about 5 days following an earnings report. 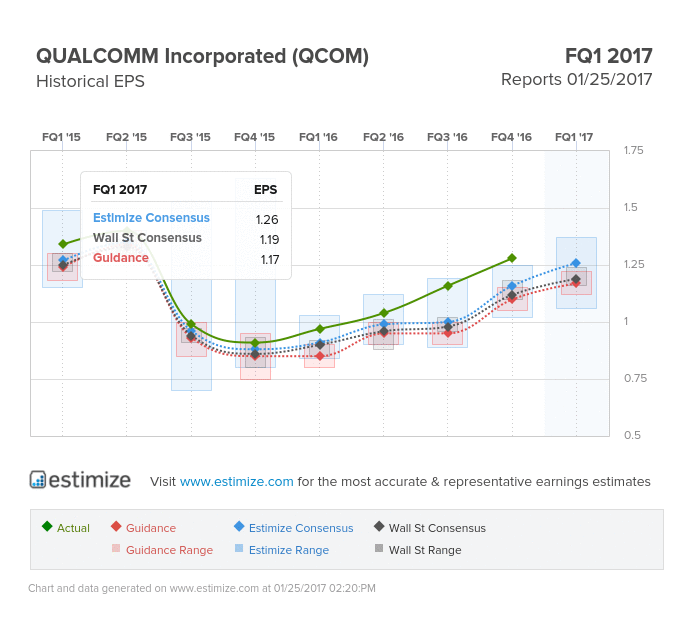 Qualcomm consistently top analyst’s expectations each quarter thanks to the success of its high margin license business. This portion of the company generated about $8 billion in revenue but came under fire following a lawsuit from Apple last week and the FTC in 2015. Its unclear whether Qualcomm is at fault but anytime a company is at the center of multiple lawsuits, it doesn’t bode well for business.

Meanwhile Qualcomm faces multiple threats to the its planned $47 billion takeover of NXP Semiconductors. Trump’s recent rhetoric surrounding mergers and China raise the odds that regulator squash the impending deal. When or if the deal is completed, it should help diversify Qualcomm’s holdings and provide a new layer of support to the top line.

On the bright side, the company’s involvement with Verizon to deploy 5G technologies along with a growing presence in high growth technologies including automotive, networking and mobile computing bodes well. Many new and pre existing products already feature Qualcomm’s flagship Snapdragon processor. As Qualcomm continues to expand and release new products, so has its competitors. Intel and Broadcom, its closest rivals, remain committed to challenging capturing market share through many of the same initiatives.

Out of the 31 analysts polled in the past 12 months, 12 rate Qualcomm stock a Buy, 18 rate the stock a Hold and 1 recommends to Sell. With a return potential of 23%, the stock’s consensus target price stands at $69.54.