Uniqure NV (NASDAQ:QURE)’s presentation of 1-year follow-up data from patients with Sanfilippo B (MPS IIIB) and treated with the gene therapy AMT-110 is only a week away, on September 19 (here). Expectations are modest in front of what could be equivocal results for this early product candidate.

By way of background, AMT-110 consists of an AAV5 vector carrying a therapeutic NaGlu (α-N-acetylglucosaminidase) gene. Institut Pasteur began a phase I/II study in four patients in October of 2013, and this will be the first look at 1-year results. UniQure has an agreement to acquire the clinical results and commercial rights to the program following completion of this small study.

For a deeper look at QURE, read our previous coverage.

First, I want to re-emphasize what I stated in a blog post on gene therapies for lysosomal storage diseases last month: that clinical proof-of-concept data does exist for gene therapies in lysosomal storage diseases for bothlentiviral vectors (late infantile metachromatic leukodystrophy) and adeno-associated virus (AAV) vectors (Sanfilippo A, MPSIIIA). But, the existing results are not highly indicative.

Privately held Lysogene tested SAF-301 (AAVrh.10-SGSH-SUMF) in 4 patients diagnosed with Sanfilippo A (MPSIIIA) in an open-label phase I/II trial that began in 2011. With these types of heterogeneous progressive neurodegenerative conditions, long-term follow-up is required to truly understand the treatment effect, if any,thus existing results from the Lysogene program should be viewed as preliminary. At one year post-treatment, investigators determined that patients 1-3 were considered clinically stable, and patient 4 was considered to have improved. In addition, neuropsychological evaluations suggested a possible improvement in behavior, attention, and sleep. Exhaustive neuropsychological evaluations performed at inclusion and 52-weeks post gene transfer are shown below: 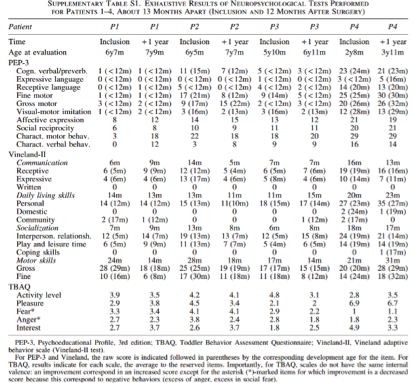 The neuropsychological evaluations used are objective and do not provide a robust efficacy signal with 52-week follow-up. As mentioned, I suspect longer-term follow-up is required to tease out any meaningful cognitive effect. Lysogene continues towards 5-year follow-up of the original four patients treated with SAF-301, but we dohave parent testimony on one subject. Karen Aiach, co-founder and CEO of Lysogene, has a diagnosed daughter who received SAF-301 in the phase I/II clinical trial. Mrs. Aiach was interviewed in Forbes in July: “[Ornella] was dosed with treatment at the age of 6, which is pretty advanced in the disease. Since then she’s been much better for the last three years from a behavioral standpoint – not hyperactive, sleeps well. That’s changed her life, and the lives of her family around her”. Nevertheless, an objective signal is somewhat weak, and 5-year follow-up will be critical to determine the robustness of this efficacy.

Enzyme replacement therapy (ERT) such as Biomarin’s laronidase (MPS I) and Shire’s idursulfase (MPS II) have been the standard-of-care for somatic MPS. Unfortunately, due to CNS involvement in MPS IIIA/B, ERT has not been shown to be effective in these indications, and hematopoietic stem cell transplant (HSCT) has not been adequately assessed for MPSIII.

In order to determine where investors should place the efficacy hurdle for CNS symptoms and disease course for MPSIIIA/B, we turned to cognitive outcomes for MPS I patients – a type of MPS with CNS-involvement – treated with ERT and HSCT. To date, intravenous ERT for MPS I has not been sufficient to prevent decline or improve cognition in patients with MPS I. HSCT, meanwhile, has been shown to improve disease severity and cognition in patients with MPS I, but It was only after multi-year follow-up that efficacy could be adequately assessed. The importance of multi-year follow-up in determining treatment efficacy is further supported by the significant natural history variability in patients diagnosed with MPSIIIA/B.

So what does this mean for the impending AMT-110 52-week follow-up data?  It’s likely much too early for arobust efficacy signal on the cognitive assessments. Biomarkers are a much more appropriate outcome to asses, such as glycosaminoglycan (GAG) accumulation and NaGlu expression. These may offer validation that the AAV5 vector has successfully transfected cells in the CNS and are functionally active.

We sat down with uniQure last week to discuss the endpoints being used in this trial. Recall that the Pasteur group that conducted the Lysogene SAF-301 trial are the same group conducting the AMT-110 Sanfilippo trial, and they will be using the same cognitive and neuropsychological endpoints that were assessed in the Lysogene trial: Psychoeducational Profile (PEP-3), Vineland adaptive behavior scale (Vineland-II), and Toddler Behavior Assessment Questionnaire (TBAQ). GAG accumulation will not be assessed in this trial because the Pasteur group was unable to develop an adequate assay to measure GAG. UniQure stated if they do in-license the program they will work on developing a validated assay for GAG measurement.

Put directly, I don’t expect a robust cognition efficacy signal at the 52-week follow-up. I would, however, be satisfied with these results suggesting CNS disease stabilization, as seen in the SAF-301 trial. Despite AMT-110 being dosed five times higher than SAF-301, the AAV5 vector appears to be inferior to the AAVrh.10- vector for CNS applications. Despite this, there is reason to believe that AMT-110 could show a cognitive/neuropsychological efficacy signal considering that the AMT-110 trial enrolled much younger patients (2-4 years old) than those dosed in the SAF-301 trial (5-6 years old).  In addition, AMT-110 was delivered via 8 burr holes, which includes delivery to the cerebellum. SAF-301 was delivered via 6 burr holes and excluded the cerebellum.

In terms of AMT-100’s potential value, upside (or downside) is difficult to quantify. First, multi-year follow-up are absolutely necessary to determine who should be administered these gene therapies and when in their disease progression. This was highlighted with laronidase, where a robust efficacy signal was only apparent after six-years of follow-up. In attempting to quantify potential sales, we turned to revenue numbers from Shire’s Elaprase (idurasulfase). We calculated a current worldwide market penetration of idurasulfase in MPS II of ~20%. For simplicity sake, we assume a similar, aggressive market penetration for AMT-110; but, we also assume only 40% of patients will be eligible for AAV5 gene therapy due to pre-existing neutralizing antibodies. With a one-time WAC of $800k, U.S./EU sales peak in the $200 million-range. Using these assumptions, we feel comfortable with current available data assigning a maximum fundamental upside of ~$4.00/share for Uniqure, with a 33% probability of success and a 20% discount rate. Of note, the 33% probability of success is our pre-data estimate and assumes that AMT-110 will show a similar modest cognitive/neuropsychological signal as SAF-301.

Perhaps more importantly, these AMT-110 results may give investors a better idea of gene therapy’s applicability in lysosomal storage diseases, a fairly broad, unmet orphan need. Success now, or further down the road, opens the opportunity in a number of CNS-driven LSDs.

Disclosure: One or more of PropThink’s contributors are long QURE.

uniQure to Snap up Corlieve Therapeutics for €46.3M; Shares Rise