Jeffrey Talpins first launched his hedge fund firm Element Capital Management twelve years ago, tagged with a $50 million high minimum investment requirement. With the firm handling $6.6 billion in assets last summer, after garnering $2 billion in just two weeks this past March, under Talpins’ shrewd eye, Element is now managing assets up to a hefty $12 billion. Carrying a valuable history where Talpins used to trade at Goldman Sachs and Citibank, the hedge fund guru seeks to be a smart relative value macro manager, taking advantage of volatile stocks and mispricing seen in the market. How enthusiastic or discouraged is the masterful trader, the man who took a long position on the U.S dollar and won, feeling on the likes of Aptevo Therapeutics Inc (NASDAQ:APVO), Tesla Inc (NASDAQ:TSLA), and Snap Inc (NYSE:SNAP)? Let’s take a closer look.

Aptevo is glimmering with compelling value from where Talpins is standing, as under his strategic leadership, Element initiated a holding in the biotech firm in a second quarter move that saw a purchase of 76,431 shares worth $158,000. This is a move that is handsomely paying off today.

On back of Aptevo breaking news of a deal to sell its three marketed hyperimmune products to Saol Therapeutics for a total consideration of up to $74.5 million, WinRho SDF, HepaGam B, and VARIZIG are the cause of celebration for both Talpins and shareholders. The sky is the limit for the firm’s shares, which have subsequently been skyrocketing 62%.

“We’re extremely pleased to announce our agreement with Saol Therapeutics for the sale of our hyperimmune commercial products. The significant non-dilutive funding provided by this transaction will ensure that Aptevo continues to be solidly capitalized to invest in the opportunities where we see the most potential for long-term value creation for our stockholders,” asserts Aptevo President and CEO Marvin White.

Moreover, monetization potential looks enticing, as White surmises, “With a deal value of up to $74.5 million, representing approximately 2.8 times both our current market capitalization on August 30, 2017 and our 2016 annual revenue, we view this as a very attractive opportunity to monetize our non-core assets and not dilute our stockholders as we continue to invest in promising assets like our ADAPTIR platform.”

The future could be bright for Aptevo. Additionally, according to TipRanks, Joshua Schimmer of Piper Jaffray rates a Buy rating on Aptevo stock with a price target of $5, which represents a 138% increase from current levels. 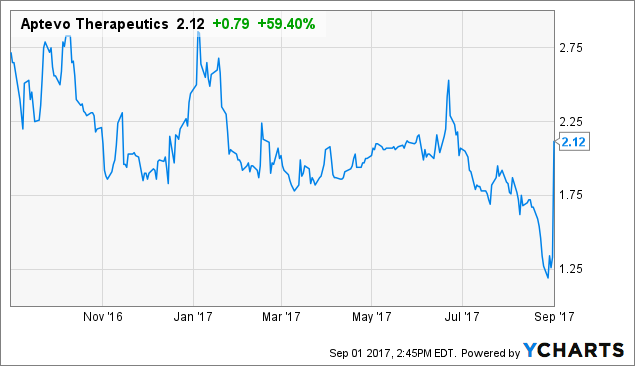 Tesla Tossed to the Gutter

CEO Elon Musk’s electric car giant is getting the boot from more names than one, with Element striking its position from 59,166 shares to none in Tesla. With enthusiasm starting to run out on the giant, retired fund manager David Rocker would clearly back Talpins’ bearish quarterly ditch- a man vocal about being short on Musk’s intelligence and innovation for lack of profitability.

Frowning at Tesla as Rocker believes this company is “becoming the loudest canary in Wall Street’s coal mine,” he criticizes Musk for not having profits as the fundamental goal like the rest of Wall Street’s vying contenders. Rocker disparages Musk, zapping: “Tesla has been around for 14 years and has cumulatively lost more than $3.7 billion, despite the massive subsidies that it and its customers have received.”

In fact, Musk is not the only one on Rocker’s list of disparagement, as he muses, “yet the bulls swallow all of the weirdness with little question,” adding bulls would be glad to turn a head to the fact: “There were virtually no comments or questions about imminent competition in the last conference call.”

Sure, the giant made the first footsteps, leaping to the head of the pack in dealing electric cars to an enthusiastic public: However, “[…] this in no way guarantees success, as competition and technological change are major challenges. Remember Atari, Blackberry, AOL, Napster, Netscape, and Palm?” points out the retired fund manager.

Adding insult to injury, Rocker roasts, “Musk has been hailed as a modern-day Edison, but perhaps a better comparison is Nikola Tesla, the company’s namesake. He, too, was a brilliant scientist and prominent showman who had many great ideas, but none became profitable for him.”

Ultimately, it appears the retired hedge fund manager’s biggest sense of apprehension rests on the CEO’s shoulders, as he concludes, “Elon Musk is spreading himself very thin. […] Most successful entrepreneurs are more intensely focused.”

Wall Street is not wholly bearish on Musk’s brainchild, but caution is certainly circling overhead. TipRanks analytics exhibit TSLA as a Hold. Out of 17 analysts polled by TipRanks in the last 3 months, 5 are bullish on Tesla stock, 7 remain sidelined, and 5 are bearish on the stock. With a loss potential of nearly 14%, the stock’s consensus target price stands at $305.31.

Snap Gets Pushed Away

Talpins believes his Snap position is less favorable than the last quarter, as the hedge fund guru dialed down in the company by 530,875 shares, reducing Element’s holding to 154,125 shares worth $2,739,000. Only time will tell if Snap can rally in a pool of cutthroat competition. Today, Snap shares are taking a roughly 3% dip, perhaps due to yesterday’s announcement from Facebook-acquired Instagram, Snap’s arch-rival, that its Stories feature can now be viewed not just via the app, but likewise online.

Top Michael Graham at Canaccord may still be holding out hope from a neutral stance, but the analyst was not pleased with Snap’s second-quarter print due to an overarching issue of low monetization.

In reaction to the print, the analyst reiterates a Hold rating on shares of SNAP while cutting the price target from $22 to $15, which implies a 6% increase from where the stock is currently trading.

For the second quarter, the popular Snapchat app parent company posted a slowing of DAU growth, with 21% year-over-year growth a marked step-back from its performance in the first quarter of 36%. User growth for the rest of the world (ROW) experienced the most sluggish growth at 17%, which the top analyst attributes to persistent Android challenges.

Graham explains, “Management noted that some of the easy user experience issues were fixed but that bigger structural improvements would take longer and not impact numbers until Q2/18. We also believe that expansion into international regions remains difficult due to early mover competitors […]” Yet, on a more positive note, innovation continues to be rapid-fire, which is no small feat from the analyst’s viewpoint: “That said, user engagement continues to expand, with several new product launches cited for increased activity.”

Overall, the social media company’s performance “generally” underclassed consensus expectations between a rocky one-two punch of trailing DAU growth paired with monetization that did not fare as high as had been anticipated. “DAU growth continues to be strongest in North America, further illustrating the company’s international competitive obstacles. Android issues also continue to impact ROW users, with longer-term structural fixes in progress. The company rolled out several notable products for users and advertisers this quarter that should render results in future quarters. Engagement is up but monetization remains low as the company tries to build a more robust auction marketplace for its ads. We anticipate that the company will have some growing pains but that next year should set up well after a full year of robust innovation,” Graham underscores, sidelined, but with some optimism still left in his tank for the company’s future.

Michael Graham has a very good TipRanks score with a 61% success rate and a high ranking of #128 out of 4,637 analysts. Graham yields 14.3% in his yearly returns. When recommending SNAP, Graham earns 0.0% in average profits on the stock.

How does Snap stack up against the rest of the Street’s opinion? TipRanks analytics showcase SNAP as a Hold. Based on 28 analysts polled by TipRanks in the last 3 months, 9 rate a Buy on Snap stock, 13 maintain a Hold, while 6 issue a Sell on the stock. The 12-month average price target stands at $15.10, marking a nearly 7% upside from where the stock is currently trading.