Greece’s economy is too small to make much of a difference to the global economy, or even the European economy. It was small before the crisis, and now it is at least a quarter smaller. The channels of contagion are not to be found there or with its trade ties. For all practical purposes, Greece is a small and relatively closed economy.

The main channel of contagion is finance. The Greek crisis erupted before the EFSF and ESM were established as a backstop. European countries, faced with the risk that a Greek default would overwhelm their banks which were large lenders to Greece. They were apparently attracted to the interest rates.

Various European officials had warned that investors were mispricing risk. Nevertheless, in order to mitigate systemic risk, European sovereigns loaned Greece funds so it could service its private sector debt. This is how the proverbial German tax payer got on the hook for Greece. It was tantamount to a fiscal transfer. A direct bailout of the large banks in Europe was not politically feasible, so Greece’s balance sheet was used like a Structured Investment Vehicle to do so indirectly. 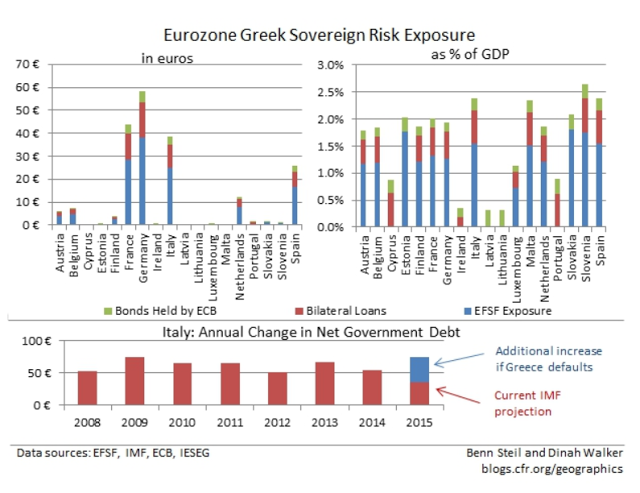 Benn Steil and Dinah Walker at the Council on Foreign Relations have created the useful graphics. This first Great Graphic shows the EU government’s exposure to Greece. The large countries (Germany, France, Italy and Spain) have the greatest exposures measured in euros. However, as a fraction of GDP, Slovenia is the highest, followed Italy, Spain and Malta. A full default would not help these countries that are struggling with their own deficit and debt issues. The impact may partly rest on how the bonds are accounted for at the sovereign level.

The IMF also has skin in the game. In fact, the IMF lent more to Greece relative to its IMF quota than any other country. In order to do so, the IMF Managing Director at the time, Strauss-Kahn, who was expected to be a candidate for the French presidency, had to overrule his senior staff (according to reports). 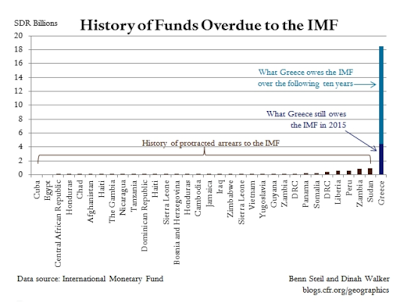 The IMF recognizes that it under-estimated the fiscal multiplier, or how much austerity was going to weaken the economy and for how long. The IMF also recognizes that the private sector debt restructuring, which took place after the ECB bought Greek bonds from them, was not as deep as it ought to have been.

Despite the fact that the Greek economy contracted by at least a quarter and that real spending fell by a third, and the mea culpa by at least one arm of the IMF, many, like Steil and Walker, argue that the IMF’s program was “mild by historical standards–particularly given the size of the loans involved.” As we noted, the IMF lent Greece more money relative to its quota than by its own rules it should have, and now Steil and Walker want to judge the conditions based on this discretionary violation.

Moreover, it is standard fare for the IMF to require currency devaluations as part of the conditions for assistance. Given monetary union, this was not possible in Greece’s case. If Steil and Walker are right that the program was mild, perhaps it was because the usual medicine was not applicable. Perhaps the fact that the IMF bypassed its own procedures may help explain its uncompromising position.

Recall that a role for the IMF in the European debt crisis was at first resisted by many European officials including the ECB. Now it is judged essential. In some ways, the IMF presence speaks to the weakness of Europe. Europeans wanted the IMF’s money, credibility and technical skills. However, even if the IMF’s credibility and technical expertise were necessary, its money was not. The eurozone has the funds or access to them, which is the same thing. The IMF has active programs in at least eight other European countries. Contrary to rumors, it is unlikely to change its name to the European Monetary Fund.