About the Author Simon Lack

We noticed several interesting slides from an investor presentation by Enterprise Products Partners L.P. (NYSE:EPD) recently. The first concerns future capital investment plans of Master Limited Partnerships (MLPs). As you can see on the first chart, lower oil prices have caused some moderation in forecast capital expenditures (“capex”) and a drop in 2016 versus 2015. 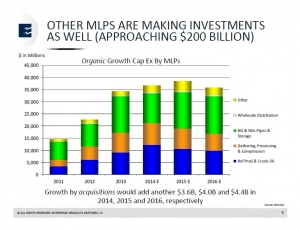 However, the numbers remain substantially higher than the pre-2013 period, and support the forecast of $30-50BN in annual capex for energy infrastructure (since while MLPs are the main operators of such assets, integrated oil companies and utilities also fund energy sector projects).

Part of the MLP story in recent years has been the growth in infrastructure build-out to support the exploitation of shale assets. While the rate of growth is flattening out, projected asset growth at MLPs remains strong. Just as hedge fund managers benefit from asset growth in hedge funds, so should MLP General Partners expect to benefit from running bigger MLPs. 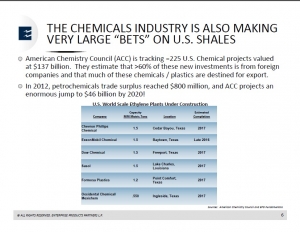 Another interesting slide concerned the growing interest in petrochemical facilities to take advantage of cheap natural gas in the U.S. As the table at right shows, the U.S. is fast developing a healthy trade surplus in petrochemicals exports.

Perhaps the most interesting insight was contained in the third chart, highlighting where oil production has been growing and where it hasn’t. As the chart title asks, “Why Couldn’t OPEC perform?” The rational response to the steady increase in oil prices over the past decade (albeit with a substantial fall and recovery in 2008-9) caused by growing demand from emerging economies should have been to match that increase with higher output, thus arresting the price increase and rendering other, unconventional sources of crude oil production uneconomic while still at a nascent stage. But OPEC, and most notably Saudi Arabia, failed to take this logical step. This created the opening for North American output to develop, meeting the increased demand while lowering its unit cost of production through economies of scale and ongoing technological improvements.

That OPEC didn’t do this suggests that they couldn 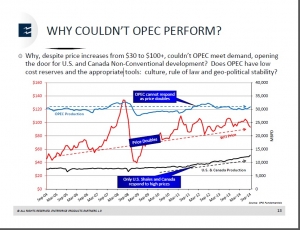 ‘t, and highlights the difference between very low production costs for proved, developed reserves in the Middle East versus relatively high costs to develop new resources beyond what is already in production. Clearly, from the perspective of a group of producers that still satisfies roughly one third of global oil demand, a modest increase in output to maintain market share and render new sources of supply uneconomic early on would have been a far less costly strategy than the current one of maintaining fairly constant output regardless of price. It suggests that even countries such as Saudi Arabia have a fairly limited capacity to increase output over the short term.

North American shale production, with its ability to adjust output quite quickly in resopnse to price changes, is turning out to be the swing producer. If this analysis is correct, it should result in a more stable oil price than we’ve seen in the last year since a more flexible supply response to price movements now exists.