With the awaited decision of August 4, even the Bank of England has put aside any delay and has steered towards an aggressive expansionary monetary policy to contrast the recessionary pressures due to the Brexit shock on market expectations. Apart from the expected interest rate cut of 25 basis points, different unconventional measures stand out: a 6-months resumption of the government bonds (Gilts) buying programme for a monthly amount of $ 60 billion, to be combined in synergy with the purchase of £ 10 billion of corporate bonds in 18 months.

The intervention in the corporate debt markets remains one of the most incisive tools in the hands of the central banks in order to induce a reduction in the funding costs of the non-financial sector and bypass the credit crunch due to a distressed banking system. At the state of the art, corporate bonds purchase programs are active in Japan, UK and in the Eurozone. On many occasions the Bank of japan has accelerated the pace of the purchases, even if now it appears it has reached its limits of intervention: the size of the market is not ample enough to support further expansions of the program, while the big Japanese industrial corporations are able to finance themselves at near zero interest rates (recently Toyota succeeded in placing a 3-years bond by offering a yield of 0.001%).

In Europe the program is instead in its infancy; at the present state, the room to maneuver is ample. The ECB has started the purchase operations of corporate bonds in June 2016 and only now the first stream of official data has begun to be released; few numbers that however are enough to verify if the first estimates made when the program was launched in March 2016, were at least realistic. According to the numbers published by the ECB, the 93% of the overall € 13.2 billion of purchases has been made on the secondary market, while only the 7% (that corresponds to € 1.16 billion) during the placement of new issues. This is not a negligible amount if we consider the traditional reluctance of the ECB to intervene in primary markets (the Quantitative Easing on government bonds is focused exclusively on the secondary market). From our point of view, this behavior signals a relative scarcity of eligible securities on the secondary market to sustain the planned pace of the ECB purchases.

On the basis of the experience of the Quantitative Easing, we estimated an overall pool of corporate eligible assets of € 550 billion and a monthly purchase ranging from a minimum of € 3 billion to a maximum of € 6 billion, without however taking in account the possible response of the market. In fact, in the hopes of the ECB, the non-financial sector should have increased the issues of debt to take advantage of the launch of the program. In this perspective, the historical records were not so favorable, since they showed a downward trend of the market issues (both gross and net of reimbursements), with a decline that was accelerating in the last months of 2015. In August 2016, we have to acknowledge that the real data of monthly purchases (€ 6.6 billion) lie outside the estimated range, but only for a small amount. Therefore it’s interesting to check if an “announcement effect” of the CBPP program has effectively pushed the non-financial sector to issue more debt. To this purpose, let’s observe carefully the following bar charts that represent the historical trend of gross and net issues of Euro-denominated bonds of Euro-Area non-financial corporations. 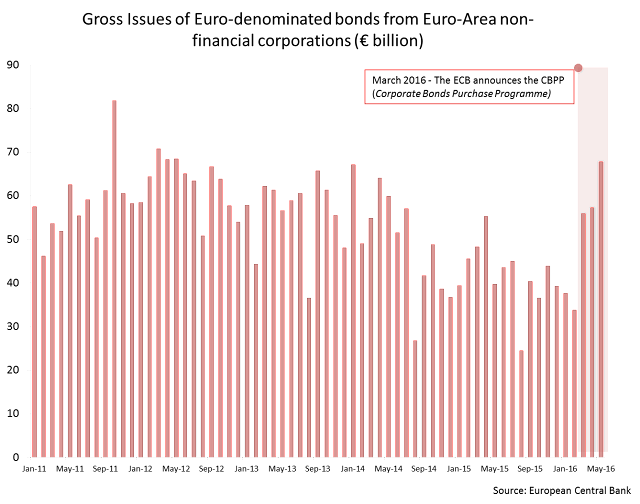 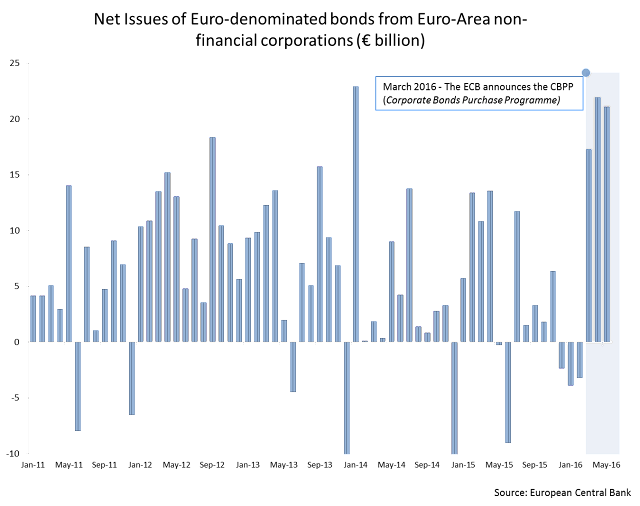 One can easily notice that starting with the month of March 2016, the big European corporations have increased considerably the issues (from € 30 billion to € 70 billion for what regards the monthly gross issues, from 0 to 20 in net terms). Hence, the good response of the market in the last four months and the consequently augmented availability of eligible assets could reasonably explain the dynamics above expectations of the ECB purchases.

The ECB is clearly aiming at having a positive, durable impact on the financing costs of the non-financial sector, to be achieved through a compression of bonds yields. In fact, the presence of the ECB as a buyer of last resort should provide to the corporations a stable, implied guarantee of a successful placement, a necessary condition to obtain lower yields. Even in this case, we have been able to retrieve useful empirical data to clarify the impact of the “announcement-effect” first and then of the purchases on the yields’ dynamics (see Figure 3). 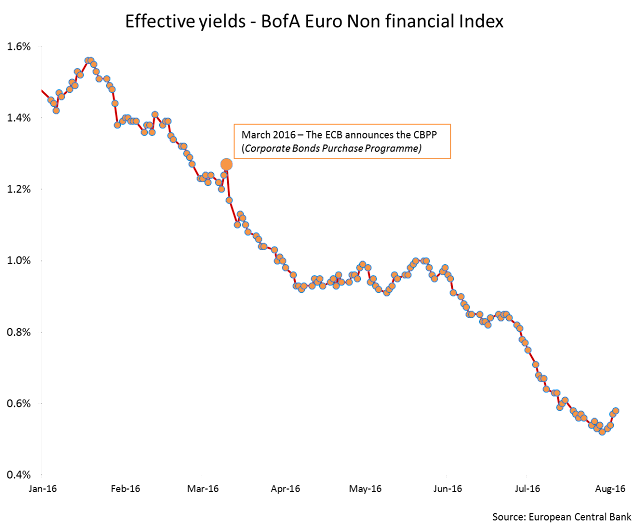 In Figure 3, the historical trend of the Bank of America Nonfinancial Index from January to August 2016 is analyzed. The index is representative of the average yields non-financial Euro denominated investment grade corporate debt publicly issued in the Euro member domestic market. The observed pattern of the index shows a marked decline after the launch of the program by President Draghi in March 2016, a subsequent stasis and a relapse in the downward trend in conjunction with the start of the ECB purchases on the primary and secondary markets.

Overall it could be observed a reduction in the BofA index (that as said before should roughly correspond to a weighted average of yields of Euro-denominated corporate bonds) up to 90 basis points from the relative maximum registered at the beginning of 2016.

In summary, the first empirical evidence seems to confirm the potentiality of the ECB corporate bonds purchase programme in contrast to the credit crunch, at least in average at a European level. The data seem to highlight a significant responsivity of the new debt issues and of the average yields to the ECB monetary stimulus, which intensity appears to exceed the prudential expectations of the market. However, in the future months, it should be observed if the central bank will be able to continue the purchases at this sustained pace without impacting the market liquidity that remains very thin. Moreover, it’s not granted that lower funding cost for the non-financial sector will stimulate new investments.

On the issue, numerous doubts are still in place: in Japan, the big corporations have used the new liquidity trickling from the monetary authorities to the banking and corporate sector to benefit the existing shareholders, both directly by boosting the dividends and indirectly via buybacks. The buybacks have exploded from ¥ 1000 billion in 2012 to over ¥ 4000 billion in 2015, but visible effects have been appreciated only on the stock markets, where the ETF and corporate bonds purchases have been determinant in sustaining the Nikkei index to high levels. The dynamics of corporate investment have been largely unaffected by the BoJ unconventional measures. Paradoxically, the market rewarded these strategies since a reduction of the floating stocks increases by definition the earning per share. Time will tell. Surely, the small businesses, cut off by Draghi’s CBPP, will continue to endure a persistent credit crunch due to the difficulties of the Eurozone banking system, especially in peripheral countries. This is not exactly encouraging from the perspective of growth in countries where the small-medium enterprises are the core of the manufacturing sector, like Italy.