On the verge of bankruptcy, J.C. Penney Company Inc (NYSE:JCP) has made a remarkable turnaround in the past few years. Consumers are shying away from higher end department stores like Macy’s and Nordstrom’s in favor of discounters like JCP. This has been huge for the stock which is already up 20% on the year. The Estimize consensus is looking for a loss of 35 cents per shares on $2.94 billion in revenue, 4 cents higher than Wall Street on the bottom line and right in line on the top. Earnings per share estimates have increased 13% since its last report and now predict 39% growth from a year earlier. On average the stock is a positive mover leading up to earnings and then turns negative by 2% in the 30-day post earnings period. 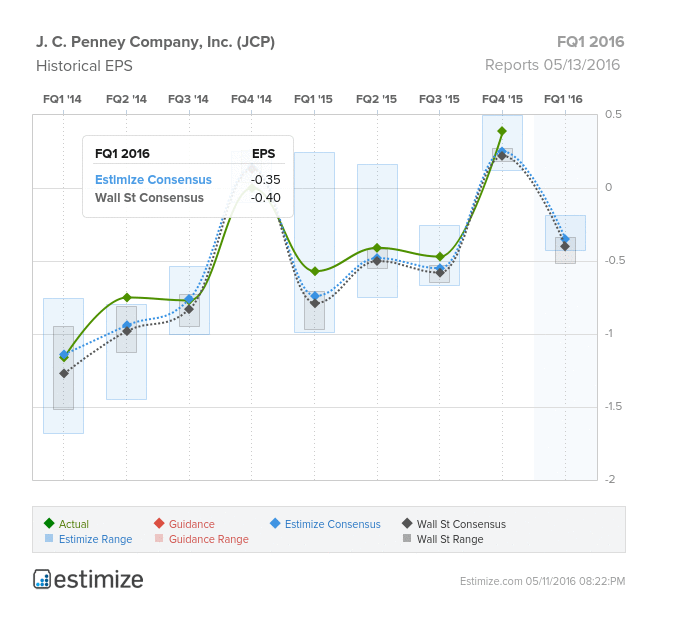 This quarter, JCP is expected to be the biggest winner amongst department stores. The low end retailer crushed the holiday season with reported earnings per share that were 15 cents higher than expectations. The quarter also featured a 4.1% increase in comparable store sales, with additional gains coming from online sales. For 2015 comp store sales grew 4.5%, free cash flow improved by 130% and the company retired $500 million of debt. As a result, the stock is up over 20% since the start of year. Strong numbers were primarily driven by an increased focus on its omni channel capabilities, expanding store-in-store Sephora sales and deeper penetration of its private brand. JCP has already indicated that first quarter profits will come in higher than expected, providing reassurance to investors that worry its turnaround is coming to an end.

According to TipRanks who tracks the performance of analysts and other financial experts, the analyst consensus on J.C. Penney is Hold and the average price target is $10.92, representing a %40 upside. The data is based on 17 analysts that rated Apple in the last 3 months.

Chipmaker, NVIDIA Corporation (NASDAQ:NVDA) is scheduled to report first quarter earnings tomorrow, after the market closes. The company is best known for its graphics cards found in PCs, but is also emerging as a major player in gaming, professional visualization, data center and automotive offerings. The combined four segments increased 26% last year and are expected to be a source of future growth. Nvidia’s deeper penetration in these rapidly growing markets has provided a major boost to earnings. The past 3 quarters featured large beats on both the top and bottom line, and tomorrow should be no different.

The Estimize community is calling for earnings per share of 35 cents on $1.29 billion in revenue, 2 cents higher than Wall Street on the bottom line and $19 million on the top. Compared to a year earlier this represents a 5% increase in earnings while sales are expected to rise 11%. Given Nvidia’s history of beating, it’s not surprising that the stock is a positive mover leading up and through earnings season. Currently, shares are up nearly 75% in the past 12 months. 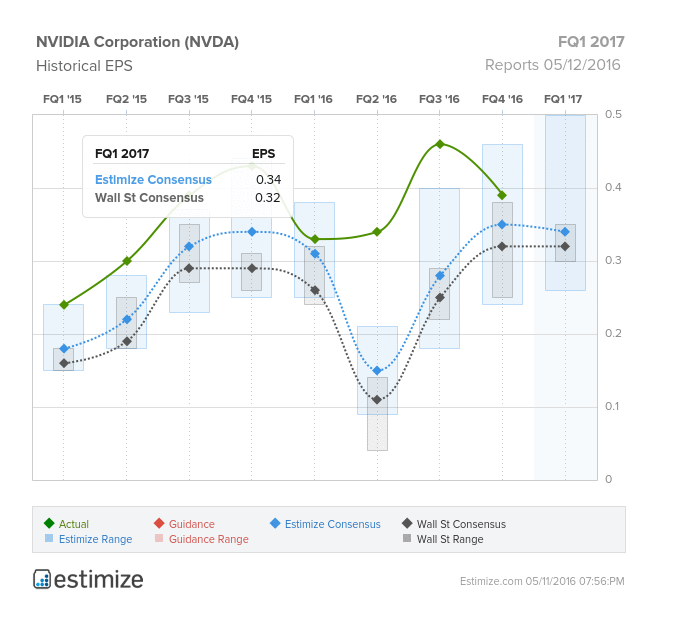 Despite the continued slowdown in the PC market and a new focus on higher growth sectors, Nvidia’s bread and butter remains graphics cards or GPUs. The company is currently leaps and bounds ahead of its only competition, AMD, controlling almost 75% of the GPU market. This year Nvidia is set to release its newest graphics card which will be more powerful and cheaper. High end graphics cards provide Nvidia their highest margins, supported by demand from hardcore gamers.

Over the years Nvidia has managed to lower its dependence on PCs and increase its exposure to high growth industries. Gaming, which largely coincides with its traditional business, has been a major focus. Increasing adoption of its GeForce processors, growing anticipation of VR devices and the success of its gaming tablet will continue to drive growth. Apart from gaming, Nvidia is establishing itself in automotive and data centers industries. As we move closer to self driving cars, Nvidia has pioneered some of the systems that will run these vehicles. On the data side, the newest versions of VMware’s virtualization suite will be supported by Nvidia processors.

Nonetheless, the continuous decline in PC sales is a cause for concern and increasing competition from Intel, Qualcomm and even AMD remain a threat.