Biopharmaceutical company, Gilead Sciences, Inc. (NASDAQ:GILD), is scheduled to report first quarter earnings today, after the market closes. Gilead has been a hot streak the past 2 fiscal years, beating in 7 of the past 8 reported quarters. Given its track record, it won’t be surprising if Gilead posts another win with its Q1 results. The Estimize consensus is calling for earnings per share $3.23 on $8.21 billion in revenue, 11 cents higher than Wall Street on the bottom and $130 million on the top. Estimates have been on the move since its last report. Earnings per share estimates have increased 10% with revenue also up 4%. Compared to a year earlier, profits are forecasted to rise 10% while sales could increase 8%

Strong earnings have not translated to the market. Gilead stock is down 3% from the prior year and 8% in the past 6 months alone. Fortunately, the stock moves in investors favor throughout earnings season. In the 30 days prior to earnings, shares typically increase 6% and continue to do so through the 30 days following results. 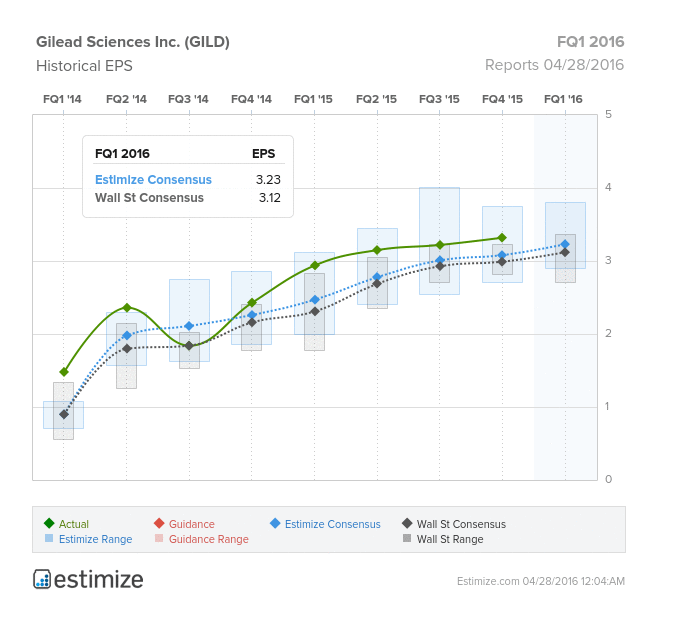 Over the last four quarters Gilead has posted positive earnings surprises of 5.9% on average, and is expected to beat again this Wednesday. Gilead is the market leader in Hepatitis C treatments, with two popular drugs Sovaldi and Harvoni. Their Hep C franchise, along with other antivirals, make up 90% of the company’s revenue stream. However, the benefit of these drugs to the bottom-line is waning as they have been on the market for a year and half now and are also curative. More competition is set to hit the Hep C market soon, with Merck recently approved to release its rival drug. Merck’s treatment imposes a direct threat to Gilead especially since the drug is cheaper than Harvoni.

In order to diversify revenues, Gilead is focusing on growing other core offerings including HIV and Hep B treatments. Newly launched Zydelig, a treatment for three forms of cancer, is performing well and with a number of new drugs already FDA approved, this could lead to strong revenue growth in the near future. In addition to a solid product portfolio, Gilead possess a robust pipeline of potential products. Additional acquisitions and licensing agreements could help Gilead reach these goals.

Amazon.com, Inc. (NASDAQ:AMZN) caps things off for FANG this quarter with Q1 earnings today after the bell. Expectations this quarter are just as lofty as they have been in the past as earnings per share estimates have climbed 26% since Amazon’s last report. The Estimize consensus is looking for earnings per share of $0.63 on $28.02 billion in revenue, 2 cents higher than Wall Street on the bottom line and $70 million on top. Compared to a year earlier, profits are forecasted to increase a resounding 620% while sales could rise as much as 25%. Given Amazon’s sheer size it’s not surprising that the stock remains relatively flat during earnings season. In the day prior shares increase on average by 2% which is the biggest movement Amazon typically sees during this time. 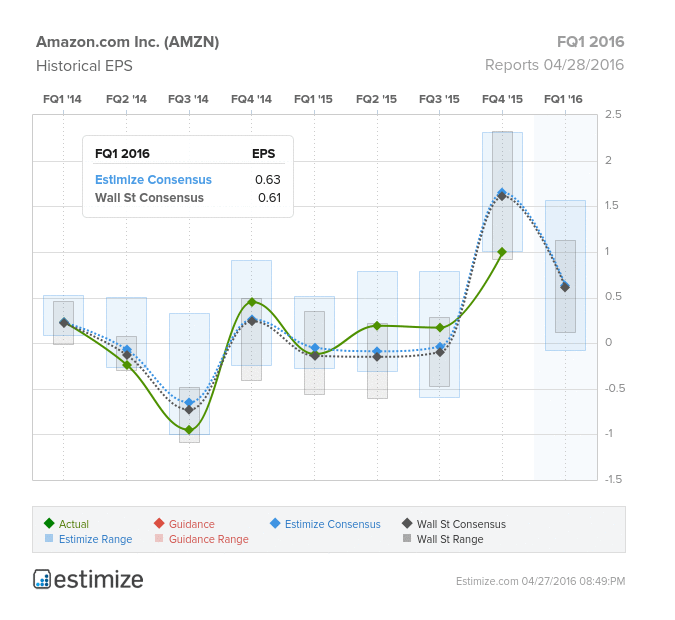 After continually being scrutinized for posting losses, Amazon is coming off three straight quarters of profitability. Amazon Prime and the dominance of Amazon Web Services (AWS) is expected to carry the retailer in 2016. During the past 2 years, Amazon Prime memberships have nearly doubled, up to 54 million, and almost half of all adults in the U.S. have Prime subscriptions. In fact, a quarter of all active Amazon shoppers are Prime members. In hopes of converting more customers to Prime, Amazon raised the minimum order total for free shipping for non-Prime members to $49 from $35 earlier this year.

On the other hand, AWS is currently leading in the cloud infrastructure industry, representing about 30% of the market. In recent years, large enterprises such as Netflix have migrated to AWS to be its platform provider which validates their credibility and reliability. In addition, Amazon has begun expanding its web services in five new regions this year, including China, India, and the U.K. Heavy investments in global expansion on top of Google and Microsoft’s ascension in cloud computing will put pressure on Amazon’s margins. On the bright side the expected growth in cloud computing and Internet of Things (IoT) should support an optimistic outlook as Amazon continues to expand its web services.

Groupon Inc (NASDAQ:GRPN) is scheduled to report fourth quarter earnings April 28, after the bell. Despite a massive beat last quarter, Groupon has been unable to establish market share in its core business. The company recently appointed a new CEO who outlined three focus areas for leading the company to growth: marketing, international expansion and shopping. While Groupon is primed to benefit from these trends in the long run, it will have no bearing on how the company reports today.

The Estimize consensus is calling for EPS of $0.00, down 63% in the past 3 months, on $724.22 million in revenue, 3 cents higher than Wall Street on the bottom and $17 million on the top. Compared to a year earlier, profits are forecasted to decline 138% with sales down as much as 4%. Given Groupon’s unfavorable year-over-year comparisons, it’s not surprising that the stock is historically a big mover through earnings season. In the moments prior to earnings, shares typically decrease 4% but then recover to a 6% increase 30 days following results. 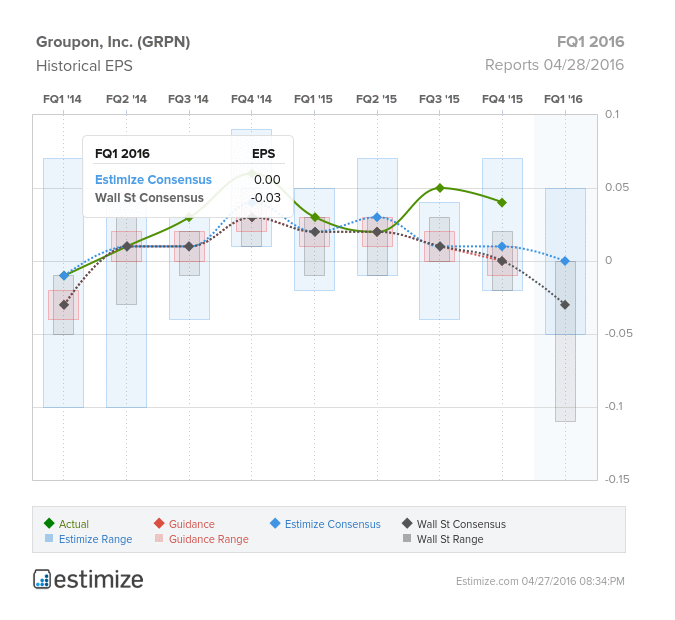 Groupon’s massive beat last quarter was highlighted by jumps in several key financial and consumer metrics. In Q4 alone, Groupon sold more than 1 billion units, saving consumers in North America nearly $20 billion.These gains came on the back of an increasing number of merchants, heavy investments worldwide and growing search traffic. Groupon is now predominantly a mobile business, accounting for more than 55% of all its transactions. The company also benefited after Alibaba acquired a 5.6% in the company earlier this year.

Unfortunately, Groupon is still an afterthought to large online marketplaces like Amazon and even eBay. CEO, Rich William’s ongoing restructuring plan will shift Groupon away from a deal business to a local marketplace. For this, the company has outlined three key focal areas: marketing, international and shopping. This reorganization will weigh heavily on financials in the near term and has been a cause of plunging stock prices. Meanwhile, Groupon is simply not profitable and competing in a crowded space against giants such as Amazon and WalMart has certainly not helped. That said, with the stock now up 60% boost in the past 3 months, Groupon is hoping they can continue its success this quarter.

Several social media companies are scheduled to report earnings this week. After Twitter and Facebook comes LinkedIn Corp (NYSE:LNKD), which is scheduled to report Q1 earnings on Thursday. The professional network is coming off of 3 consecutive beats on the bottom line and revenue has steadily increased since its debut on the public market. Unfortunately, earnings have not translated to success for the stock. Following Q4 earnings, weak guidance sent shares tumbling over 45% with the stock now down 54.4% from this point last year. The company indicated first quarter earnings would come in closer to $0.55, a significant decrease from the $0.77 Wall Street was initially expecting. 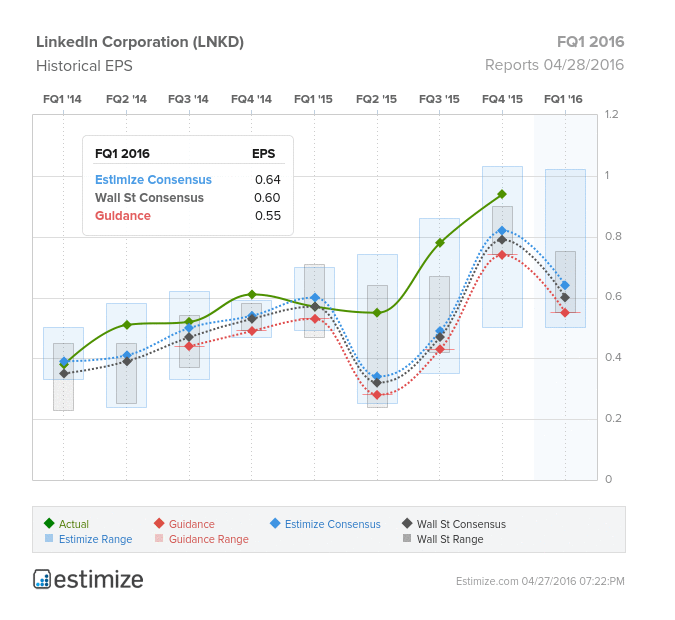 For the first quarter, the Estimize consensus is calling for EPS of $0.64 on $831.92 million in revenue, 4 cents higher than Wall Street on the bottom line and $3 on the top. Compared to a year earlier, profits are forecasted to increase 15% while sales could grow as much as 31%. On average, the stock typically moves around earnings season. Leading into earnings, shares have historically increased, but then tend to drop into negative territory once the company reports. 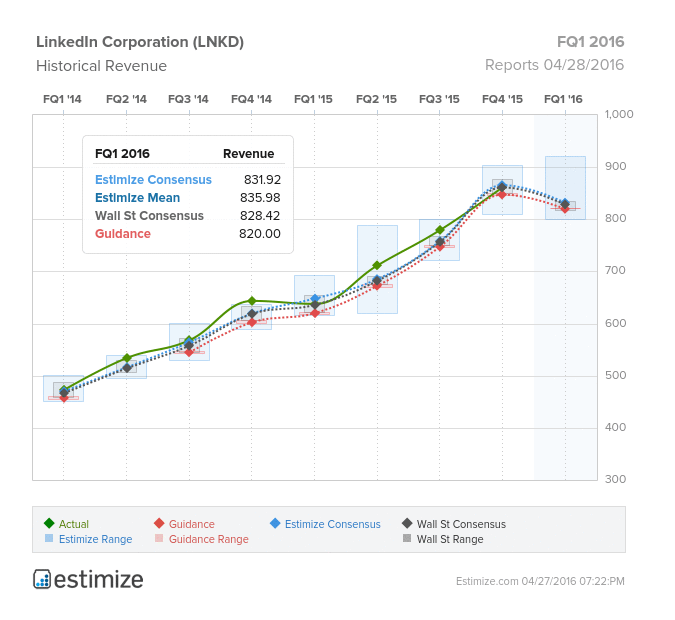 Unfortunately, for LinkedIn decent growth is not enough to spark a surge in stock prices if forward guidance isn’t positive. LinkedIn’s efforts to get professionals excited about its social network is not paying off as quickly as Wall Street expected. Last quarter, the company reported an increase in member while unique visitors fell flat and member page views dropped.There is also a high probability that Facebook starts to infringe on LinkedIn’s space with the introduction of Facebook at Work. Given Facebook’s success with everything it touches, this could be a huge blow to LinkedIn moving forward. Still, the company is gaining traction across many key areas including its mobile app and geographical footprint.