Gilead Sciences, Inc. (NASDAQ:GILD) turned a fruitful fiscal 2015 into a volatile 2016 after a string of weak reports took the stock down 15% from a year earlier. A considerable portion of the draw-down accrued from weak sales of its flagship Hep C products; Harvoni, Sovaldi and the recently launched Epculsa. Analysts expect the combination of flat drug sales and ongoing speculation about the Trump administration to take a toll on fourth quarter results.

In fact, estimates activity edged down considerably in the past 3 months, often a precursor to a weak report. Analysts at Estimize expect earnings of $2.50 per share, about 22% lower than the same period last year. That estimate dropped by 11% after Gilead’s mixed third quarter results. Revenue for the period is forecasted to drop 15% to $7.21 billion, marking three consecutive quarters of negative growth. 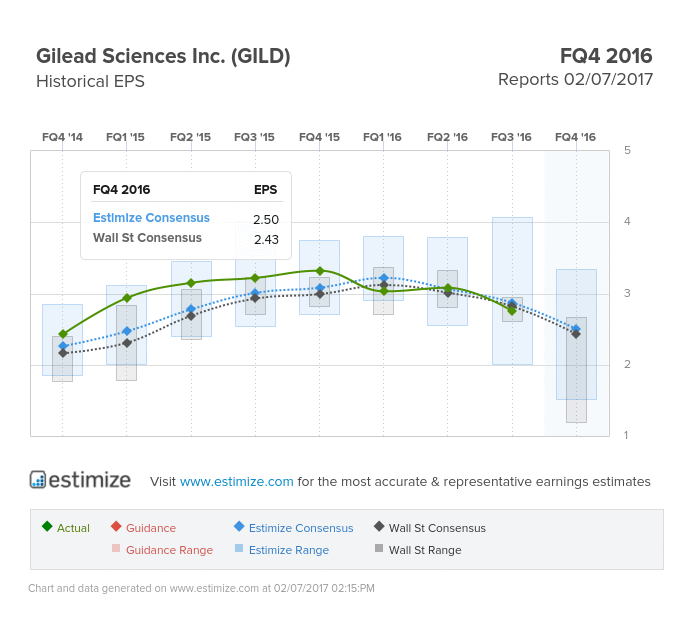 This evening’s report once again highlights the performance of new HIV and HBV products but above all else, the HCV franchise will draw most of the attention. In the third quarter sales of Harvoni, Sovaldi and Epclusa fell to $3.3 billion compared to $4.8 billion from a year earlier. Management blamed the decline in Harvoni and Sovaldi sales on the introduction of Epclusa in key U.S. and European market but the more likely culprit is Merck’s entry into the Hep C market. Merck’s aggressive pricing strategy stole a considerable amount of the Hep C market that Gilead once cornered.

Offsetting some of these losses was a strong performance from HIV and other antiviral products. Sales from the two jumped to $3.5 billion from $2.9 billion a year primarily due to an uptake in tenofovir alafenamide based products. This trend should provide some support in the fourth quarter as well. Gilead also recently launched its first HBV drug, Vemlidy, which should start to contribute meaningfully to the top line.

Besides the question of drug sales, Gilead face the threat that President Trump decimates drug pricing in the biotech and pharmaceutical industry. Any indication that financial performance will be hurt in fiscal 2017 from the new administration could ignite a sharp sell off today afternoon.

Walt Disney Co (NYSE:DIS) prepares to kick off its fiscal 2017 when it releases first quarter results today after the market closes. The entertainment giant is coming off a disastrous fourth quarter that fell short of the Estimize consensus by 8 cents per share on the bottom line and about $400 million on the top. The report didn’t phase investors though, as share climbed about 19% in the past 3 months. Today’s results will yet again focus on the performance of ESPN but also highlight the success of the newest Star Wars movie released in mid December. It’s understandable that expectations for the first quarter remain tepid given the company’s share of ups and down last year.

Analysts at Estimize expect earnings to come in 1 cent higher than the Street at $1.50 per share, reflecting a 7% decline from a year earlier. That estimate fell by 5% following dismal fiscal fourth quarter results. Revenue for the period is forecasted to increase 1% to $15.30 billion on robust ticket sales from Star Wars Rogue One. Historically the stock doesn’t react immediately through the print but tends to move the most in 30 days prior and after a report. 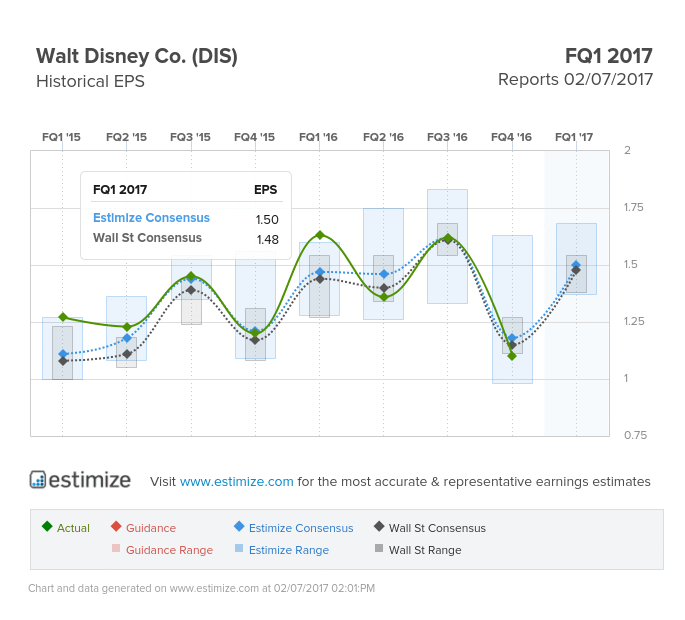 As always ESPN subscription numbers fall front and center when Disney announces quarterly results. The multimedia sports network continues to face an uphill battle in light of cord cutting behaviors and wider adoption of skinny bundles. Operating income from Cable Networks decreased $207 million during Q4 due to decreases at ESPN and Disney Channel. Growth at Freeform (formerly ABC Family) helped offset some of these losses through lower programming and production costs, and a decrease in marketing expenses. Income from broadcasting, on the other hand, increased $60 million to $224 million, on greater program sales from shows such as Luke Cage and Quantico. However, the overall performance of media networks is still predicated on the performance of ESPN, which otherwise looks bleak.

Beyond media, performance in Studio Entertainment and Parks and Resorts continues to excel on the back of blockbuster movies that also translate to attractions at the theme parks. Studio entertainment is likely to see a huge uptake in Q1 from the roaring success of Star War Rogue One. And while the economy improves and travel trends start to pick up that plays into the hands of Parks and Resorts. Both divisions posted positive growth in the fourth quarter and remain on track to do so again.

Disney also generates a large portion of total revenue from consumer products and interactive media which includes licensed merchandise. Sales from this division saw considerable pressure last quarter as revenue dropped 15% and income declined 5%. The company quickly pointed to currency headwinds and the discontinuation of the Infinity console game business for the lackluster performance. With the dollar trending close to a short term high, it’s unlikely Disney does a complete 180 this quarter.