Advanced Micro Devices, Inc. (NASDAQ:AMD) has been one of the best comeback stories over the past year. After years of the stock getting consistently being beaten down, shares are up well over 100% in 2016 and nearly 250% from a year earlier. This is a testament to a strong portfolio of GPU and CPUs and advancements in new technologies such as virtual reality. AMD has steadily closed the gap on its two biggest competitors, Nvidia and Intel, and is now being considered a major player in the semiconductors space. Today’s results are expected to build on its past success and continue to drive share prices higher.

Analysts surveyed at Estimize are calling for earnings per share of 1 cent, 106% higher than the same period last year. That estimate has jumped 44% since AMD’s most recent report in July. Revenue for the period is anticipated to jump 15%, marking a second consecutive quarter of positive growth. Shares historically remain flat immediately through the print but tend to increase by as much as 6% in the 30 days following a report. 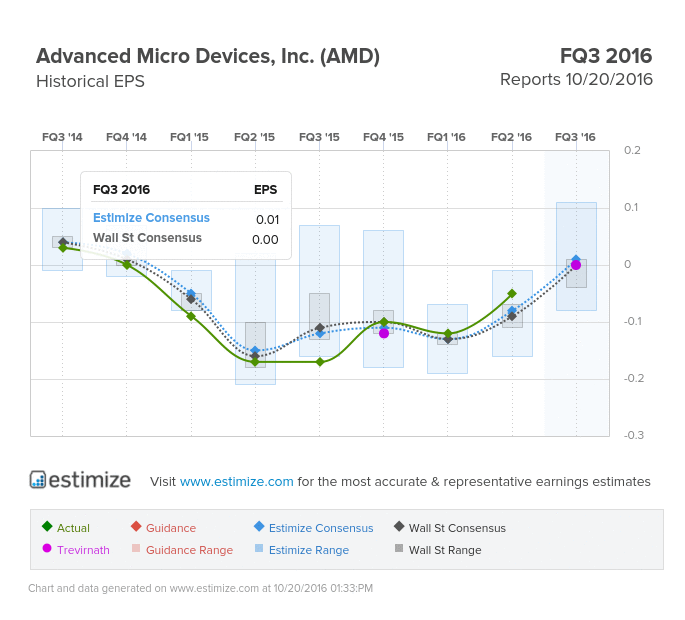 AMD’s gains come largely due to the success of some of its recent products. Its Polaris GPU and Zen processor have both come with rave reviews and offer consumers with a high end product and an affordable price point. Comparable products from Intel and Nvidia have typically been much more expensive. Meanwhile, AMD is making efforts to expand into new faster growing technologies, particularly virtual and augmented reality, and signing new partnerships to increase exposure. The company recently signed a deal with Alibaba to provides its Cloud services with AMD GPUs.

During the quarter, AMD also made the move to restructure its long term debt to more manageable levels. The initial equity dilution caused the stock to tank, but that quickly bounced back over the last month. By any estimation this is a long term move to prevent higher interest expenses in the future.

While AMD’s long term outlook appears to have improved, there still remains several short term risks. AMD is still well behind Nvidia and Intel in their respective markets and don’t have the market power to compete with them on a larger scale. Additionally, currency headwinds and weak PC sales will continue to pose a problem until a broader bounceback occurs.

Microsoft is scheduled to kick off its fiscal 2017 today afternoon. Microsoft ties will always be to PC computing and the operating system but lately its cloud computing that has carried growth. In the fourth quarter, revenue in the intelligence cloud grew 7% to $6.7 billion, while personal computing declined 4%. Productivity and business services like Office jumped 5% thanks to its move to the cloud from a native desktop program. This ongoing trend towards cloud processes coupled with additional insights on integrating LinkedIn will garner the most attention today.

Analysts at Estimize are calling for earnings per share of of 71 cents, reflecting a 4% climb from the same period last year. That estimate has jumped 4% since MSFT’s most recent report in July. Revenue for the period is expected to rise 1% to $21.77 billion, marking a slowdown from the previous two quarters. Shares have traded sideways this year and historically continue to do so through the print. 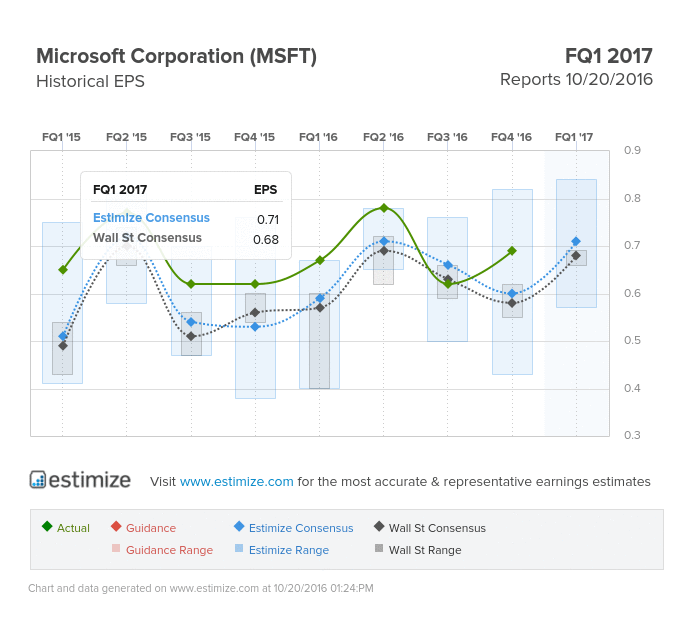 Microsoft continues to face a delicate balancing act between its booming cloud business and struggling personal computing. New revenue sources have replacing old ones as PC sales wane and become phased out. Personal computing declined 4% in the fourth quarter on declines in Surface and Phone sales. Xbox Live users and ad revenue were the lone bright spots in the sector which both jumped double digits from a year earlier. Needless to say, cloud computing has far outpaced every other sector. Azure and CRM products grew 102% and will be the biggest benefactors from the LinkedIn purchase. Analysts expect these trends to continue into the future, with cloud continuing to slowly replace its legacy business.

Beyond weak PC sales, there remains a handful of macroeconomic trends pressuring the industry. Currency headwinds, uncertainty in Europe and increasing competition pose a threat to a majority of the technology. The cloud space is now cluttered with hundreds of companies that want a piece of this rapidly growing market. Microsoft is still a few steps behind Amazon but is at least recognized as a dominant presence in the space. Meanwhile, currency headwinds predicated on Brexit uncertainty will continue to take their toll on European sales for the foreseeable future. If Microsoft can meet expectations this quarter, it will be a true testament to its market power in the cloud computing space.