Dow Up 27 Points After Fed Minutes 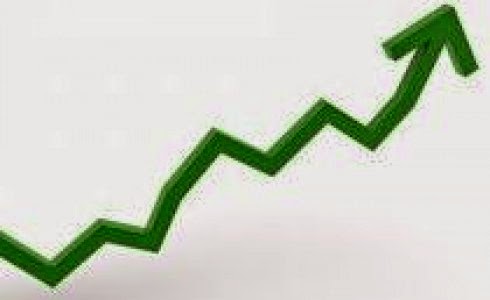 The markets were volatile after the release of the March FOMC meeting minutes. The minutes revealed a divergence in thought between members of the central bank. Several stated that recent economic data warrant a rate hike in June, while others cited recent strength in the U.S. dollar as a reason to delay a hike. June is viewed as the earliest that the central bank could tighten monetary policy and raise interest rates for the first time in six years.

This afternoon, both New York Fed President William Dudley and Fed Governor Jerome Powell proposed the possibility of a rate hike sooner than expected. In contrast, yesterday Minneapolis Fed President Narayana Kocherlakota, one of the bank’s most notable doves, said the Fed should wait until the second half of 2016 before raising interest rates, then raise them gradually to 2% by the end of 2017.

Big news in the automotive sector: Electric car manufacturer Tesla Motors Inc (NASDAQ:TSLA) announced today it will immediately stop selling its current Model S vehicle. The car was its primary base model over most of the company’s history. The company’s stock rose nearly 3% on news that it will soon introduce a new vehicle with all-wheel drive and a longer battery life. The M&A ball kept rolling this afternoon with the largest energy deal in at least a decade. This morning, Royal Dutch Shell plc (ADR) (NYSE:RDS.A) announced plans to purchase rival BG Group Plc. (OTC MKTS:BRGYY) for 47 billion pounds ($70.2 billion). Near-zero interest rates and uncertain economic horizons are pushing companies to grow through acquisitions rather than through organic efforts. The Shell deal will help the company close the gap on global market leader ExxonMobil Corporation (NYSE:XOM), and it creates the world’s largest independent producer of liquefied natural gas. Following the closing bell, Alcoa Inc (NYSE:AA) reported first-quarter earnings in a move that officially kicks off earnings season. Alcoa reported earnings per share of $0.28 per share, beating analyst expectations of $0.26 per share. Revenue rose 6.7% to $5.82 billion, less than the $5.94 billion analysts had forecast.

Stocks to Watch No. 1, LULU: Shares of Lululemon Athletica Inc. (NASDAQ:LULU) rose 3.46% this afternoon on news that the company received an upgrade from investment firm Sterne Agee ahead of its first-quarter earnings report. The firm raised its target price to $77, an 11.4% premium from today’s levels. The firm cited the yoga-gear maker’s improved business processes, stronger board execution, and the industry knowledge of its newly appointed CFO as its primary reasons for the upgrade.

Stocks to Watch No. 2, RAD: Shares of Rite Aid Corporation (NYSE:RAD) jumped more than 2% today on news that the drug retailer bested fourth-quarter earnings expectations. The firm announced quarterly earnings of $1.84 billion, or $1.79 a share.

Stocks to Watch No. 3, ETSY: The Etsy IPO date has been set for Thursday, April 16. The company will list on the NASDAQ under the ticker “ETSY.” This is one of the most hyped tech IPOs of 2015. In fact, the Etsy’s could be the largest technology IPO from a New York-based company since barnesandnoble.com spun off Barnes & Noble, Inc. (NYSE:BKS) in 1999. With the Etsy IPO date quickly approaching, here’s everything you need to know about the deal – including whether or not you should buy Etsy stock when it starts trading…

Stocks to Watch No. 4, AAPL: Shares of Apple Inc. (NASDAQ:AAPL) slipped 0.33% on news of a rare stock downgrade for the technology giant. This morning, Societe Generale SA (ADR) (OTC MKTS:SCGLY) announced it had downgraded the company over new concerns about its smartphone sales prices and negative effects of a rising U.S. dollar in recent months. The investment bank’s analyst moved the stock to a hold and maintained a price target at $130. Apple was also hit today by a number of poor reviews for its pending Apple Watch product. Reviewers complained about low battery life and slower apps.

Stocks to Watch No. 5, MYL: The deals keep coming in the white-hot biotech sector. Shares of Mylan NV (NASDAQ:MYL) surged 14.76% on news that the generic drug manufacturer offered $29 billion in cash and stock for Perrigo Company plc Ordinary Shares (NYSE:PRGO). Shares of PRGO jumped 18.39% on the day. Aside from the strong financial and increased savings the two companies could realize after a merger, the two companies would boost access in generic drugs to consumers, Mylan said in a statement.