One of the more striking developments in the bizarro world of gold and silver trading has to be yesterday’s settlement between Deutsche Bank and a class-action group that alleged that the bullion banks (DB, Scotia and HSBC) were manipulating the physical and Comex silver futures market since 2007; what is laughable and disgusting is the size of the settlement—$38 million. It’s like Lee Harvey Oswald being charged with “Assault with a Deadly Weapon” and winding up with a misdemeanor. Then again, it is really no different than Libor-rigging or the sub-prime mortgage fraud or more recently the Wells Fargo scam.

At the end of the day, if you had told me back in 1977 when I got first got hired by a old, venerable Bay Street investment firm (McLeod Young and Weir Limited) that multinational banks would be facing multibillion dollar fines for committing FRAUD and then being allowed to continue to do business, well, I would have laughed you out of the room. Furthermore, if an insignificant little retail salesman—also known as “registered representative” or “stockbroker” or “investment executive”—is caught taking client money or even recommending an “unsuitable investment,” he is offered up by his firm as a sacrificial lamb to be raped and pilloried in the Town Hall square and usually is fined far higher than he can afford (non-negotiable) and is usually banned from the industry. In fact, you can search far and wide over the past fifty years to find one senior executive of any financial services company that ever got fined or banned. Ex-Goldman CEO John Corzine stole a great deal of money from client accounts when MF Global went under and he is still living “the good life” with nary a worry in the world.

So we may now confirm that Deutsche Bank will be warbling like an amorous songbird as it gives up its co-conspirators in the upcoming London (U.K.) trial as the wagons get circled and the markers and bribes are all dialed in. Scotiabank will have its operatives in Ottawa and at the Bank of Canada crying “poor” while HSBC is in London trying its best to avoid embarrassment and inviting Members of Parliament to “tea”—all at once and behind closed doors, limos packed with all sorts of gentlemanly “favors” and bags full of cash. The more things change, the more…

Anyhow, I digress, and as I have been lecturing for what seems like a lifetime (it has), the gold and silver miners predictably made the turn to the upside around the 11th of October when they began to miraculously outperform gold and silver. As you can see in the chart below, the HUI (NYSE Arca Gold BUGS Index) decoupled from the physical metals prompting me to pen the piece “Tiptoeing Back into the Miners” on Oct. 16, and it was that last Thursday that I bought a 25% position in my beloved VanEck Vectors Junior Miners ETF (GDXJ) and subsequently added the remaining 75% the following day. I now have officially bought back the entire GDXJ position which was agonizingly jettisoned by way of a stop-loss on October 3rd at the grand price of $41.43. Until that day, sleep had been fitful, irritability rampant, and neither woman nor beast had been safe in my company. Once the GDXJ showed up in my account that afternoon, a magical calm descended upon my psyche. Howling winds and rain turned to gentle breezes and warm sunlight. My net worth is once again on the line and all is well and right with the world. 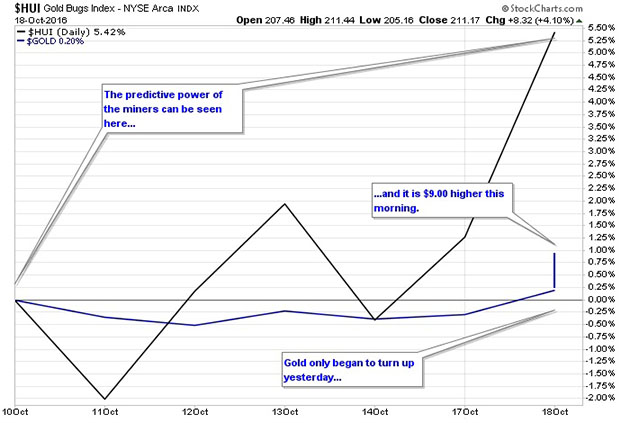 I laid out the five reasons thought the downside was limited and of course the major technical reason was the RSI (Relative Strength Index), which was dancing around the magic 30 number for most of that week but seemed to be rejecting further downside probes. The low trade for the GDXJ came on Oct. 4 at $36.96 with RSI touching 30 that day. Since then, RSI has slowly and grindingly inched higher while the GDXJ thrashed around in a tight range. What we needed to see was the physical metals pay heed to the predictive power of the miners the failure of which would be a very nasty false bottom. Predictably, luckily, wonderfully the RSI for the GDXJ has now risen to 46.39 with gold having only just scrambled back above $1,270.

What is critical is that it was only last Friday that gold very briefly retested the sub-$1,250 territory while the miners were trading higher for most of the day. GDXJ opened this morning at $41.48, a nickel higher than where my stop-loss order was filled and $2.58 higher than my new average cost base. In a nutshell, the predictive power of the gold and silver miners has once again prevailed. 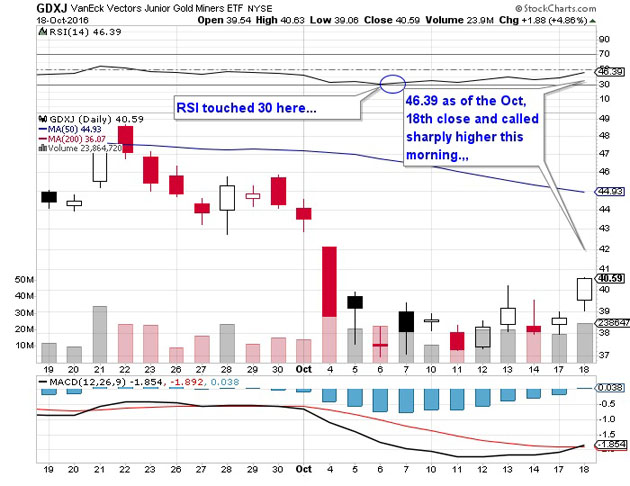 As for my intermediate term forecast, I need to see a move through $1,400 gold in order to truly, once-and-for-all, never-again-to-be-debated dispel any belief that 2016’s gold and silver rallies were nothing but “bear market rallies.” When gold closed below $1,300 on Oct. 4, there followed a torrent of bearish commentary that has been relentless in proclaiming “the Death of the Golden Bull” and it has now become “cool” to once again talk about the resumption of the deflationary tsunami and the China banking system, but then again it is never cool to talk about gold and monetary madness and central bank experimentation. While I will never claim to be a technician, the following chart goes right back to just after the sub-prime crisis when gold was responding to all of the bailouts and money printing by Fed Chairman Ben Bernanke and Co. and what is crystal clear is the downtrend line drawn off the Q3 2011 and Q3 2012 tops that now crosses Q3 2016 right at $1,400. A weekly close above that level will not only set up a test of the 2011 peak north of $1,900, it will finally silence the fools calling for $850 gold and THAT will be ultimately more satisfying than making a few million dollars here and there. 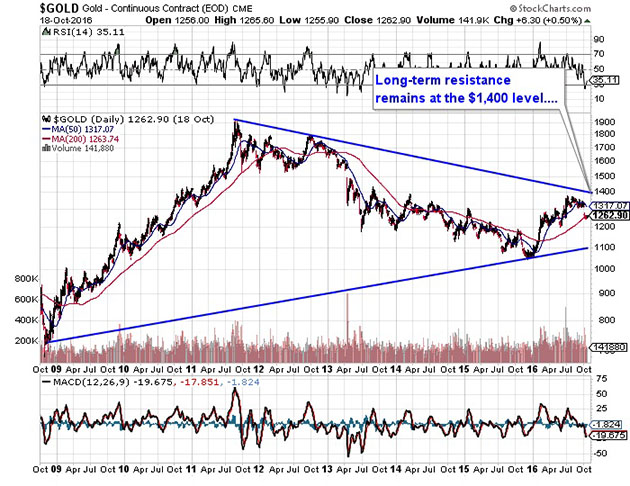 As I close out today’s missive, GDXJ has $42.00 in its crosshairs and Fido is sleeping soundly at my feet while I hear the melodic humming of a worry-free spouse in the other room. However, the pooch is sleeping with one eye open and spouse has a large ten-pound rolling pin hidden under her pinny because they both have learned how to read financial data as BNN quotes flow across the screen.

Can’t say I can blame them.