As Winter Storm Niko blanketed the Northeast in snow last week, disrupting scores of flights in the U.S., airline executives convened in Washington to talk shop with President Donald Trump.

Back in November, I wrote that domestic carriers are likely to see the new president—himself the former owner of the now-defunct Trump Airlines—as a strong partner in several key areas. Although a couple of airline CEOs have recently expressed strong opposition to some of Trump’s protectionist immigration policies, Thursday ’s meeting appeared to be constructive, with the president telling the group he would soon be announcing something “phenomenal in terms of tax and developing our aviation infrastructure.”

Details of the tax plan, he said, would likely be announced sometime in the next two or three weeks. This rejuvenated some of the spirit that swept through the market soon after his election, reassuring investors that reform would come sooner than expected.

Among other topics discussed at the meeting were the need for airport infrastructure improvements, industry deregulation, air traffic  control and U.S. carriers’ competitive disadvantage to heavily-subsidized Persian Gulf carriers. Three state-owned Gulf carriers in particular have received as much as $50 billion in subsidies from Middle Eastern governments since 2004, which allow them “to operate without concern for turning a profit,” according to a letter addressed to Rex Tillerson, the new Secretary of State, and signed by three U.S. airline CEOs, including Doug Parker of American Airlines, Edward Bastian of Delta Air Lines and Oscar Munoz of United Airlines. U.S. airlines, obviously, do not have the same privilege, putting them at a competitive disadvantage in the international market. Encouraging the Gulf states to end subsidization, as the CEOs hope, would be a huge win for domestic carriers and their workers.

The market seemed to like what it heard, as the NYSE Arca Airline Index rallied close to 2.3 percent Thursday. This was the biggest one-day move for the group in about a month, during which Trump’s executive immigration ban grounded airline stocks. The selloff following the executive order was overdone, I think, but it gave airline investors such as Warren Buffett an attractive buying opportunity.

Speaking of which, we learned last week that Buffett was convinced to bet big on the industry, reversing his famously negative opinion of the group, after being in attendance at one of Doug Parker’s investor presentations last March. Parker told attendees that consolidation had fundamentally transformed the industry, making it efficient and focused on demand.

Airlines got another boost last week after a federal appeals court, in a unanimous decision, struck down Trump’s travel ban. This prompted the president to tweet “SEE YOU IN COURT,” presumably meaning the Supreme Court.

With respect to Trump, I’m reminded of a statement former president George W. Bush made back in 2010, less than a year after leaving office. “Here’s what you learn,” he said. “You realize you’re not it. You’re part of something bigger than yourself.” The buck might stop with the president, but the office is so much greater than one man.

This point was made by David Gergen, former advisor and senior official to a number of presidents, including Nixon, Ford and Reagan. He’s now a CNN political analyst, and it was my pleasure to hear him speak at Harvard recently. Trump is learning the hard way, Gergen said, that the Office of the President cannot be run like the Trump Organization, or any other private company. In public office, there are checks and balances, and there’s blindingly harsh transparency—all of which the billionaire president, aged 70, has never had to deal with.

Trump ran largely on his dealmaking expertise, and I’m still willing to give him the benefit of the doubt that he can negotiate good deals for the U.S. But it’s important to remember that successful deals, in business and in government, often can’t occur without a judicious amount of compromise. If he truly believes in the value and necessity of imposing a temporary immigration ban on seven mostly-Muslim countries, his administration will need to go about it in a way that pleases the courts.

But then, none of us should be surprised if he insists on the ban in its current form. “My style of dealmaking is quite simple and straightforward,” he wrote 30 years ago in Art of the Deal. “I aim very high, and then I just keep pushing and pushing and pushing to get what I’m after.”

Meanwhile, the president’s unpredictability and Twitter outbursts have inevitably engendered quite a lot of market uncertainty, which, as you know, investors don’t like. This has prompted several big-name hedge fund managers to weigh in.

One such manager is value investor Seth Klarman, who oversees $30 billion as head of Boston-based Baupost Group. He tends to be media-shy, but Klarman is no slouch. In the last 34 years, he’s lost money in only three. He’s one of the very few money managers to receive open praise from Buffett himself.

Anyway, in his annual letter to investors, Klarman raised concerns that Trump’s protectionist policies and deep tax cuts could seriously hamper economic growth, both domestically and abroad, by isolating the U.S. from global trade and adding significantly to the already-bloated national debt.

“Exuberant investors have focused on the potential benefits of stimulative tax cuts, while mostly ignoring the risks from America-first protectionism and the erection of new trade barriers,” he wrote. You can read more of Klarman’s letter over at Andrew Ross Sorkin’s DealBook.

Managers at hedge fund firm Carlson Capital, which controls over $8 billion, share many of the same concerns, telling investors recently that Trump’s trade policies could “cause a global depression and a major equity market decline.”

Even for some money managers who were initially excited by Trump—Ray Dalio and Jeff Gundlach among them—reality is beginning to set in.

Last year, central bank policy and negative real interest rates drove the gold rally. This year, it seems to be uncertainty over Trump and other antiestablishment leaders, which is convincing the smart money to make wagers on the yellow metal, often seen as a safe haven during shaky times. So far in 2017, it’s up close to 7 percent, compared to the S&P 500’s 2.6 percent. In fact, if you compare this year’s price action to last year’s, they look remarkably the same, with a dip in December before the Federal Reserve raised rates. Although past performance is no guarantee of future results, gold could gain another $100 an ounce this year if it continues to follow the same trajectory. Among those who are bullish on the yellow metal is Stanley Druckenmiller, the legendary hedge fund manager who dumped his gold the same day he learned Trump had been elected. Before that, it was the number one holding in his family office account. Now he’s back, telling Bloomberg he “wanted to own some currency and no country wants its currency to strengthen. Gold was down a lot, so I bought it.”

Higher demand has been good for both junior and senior gold miners, which recently crossed above their 200-day moving averages.

The NYSE Arca Gold Miners Index was up for an incredible seven straight days ended Monday, while the MVIS Global Junior Gold Miners has made positive gains in eight of the nine previous days.

Hedge fund managers aren’t the only ones whose demand for gold is strong. For the sixth straight year, central banks continued to be net importers of the metal in 2016, with China, Russia and Kazakhstan leading world consumption. 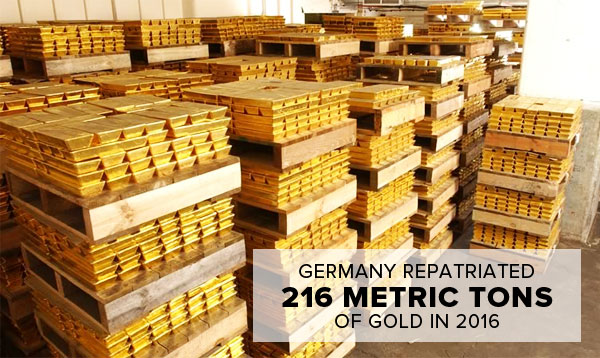 Although it might not have purchased any gold in 2016, the Deutsche Bundesbank, Germany’s central bank, ramped up its repatriation program, bringing home some 216 metric tons from vaults in New York, according to the Wall Street Journal. In 2011, former Fed Chair Ben Bernanke said central banks held gold simply because it’s tradition. I think the reason goes much deeper than that. Gold is money—it has been ever since the first gold currency appeared in China more than 3,000 years ago—and Germany’s efforts are proof of that.