Darden Restaurants Just Hit a 52-Week High, a Signal that Investors are Expecting a Beat Tomorrow? Darden Restaurants Inc (NYSE:DRI), the owner and operator of casual dining spots in the U.S. and Canada, is set to report their third quarter 2015 results before tomorrow’s opening bell. The Estimize EPS consensus is calling for $0.85, just a penny higher than the Street, while revenue expectations of $1.73B are actually slightly below what Wall Street is expecting. 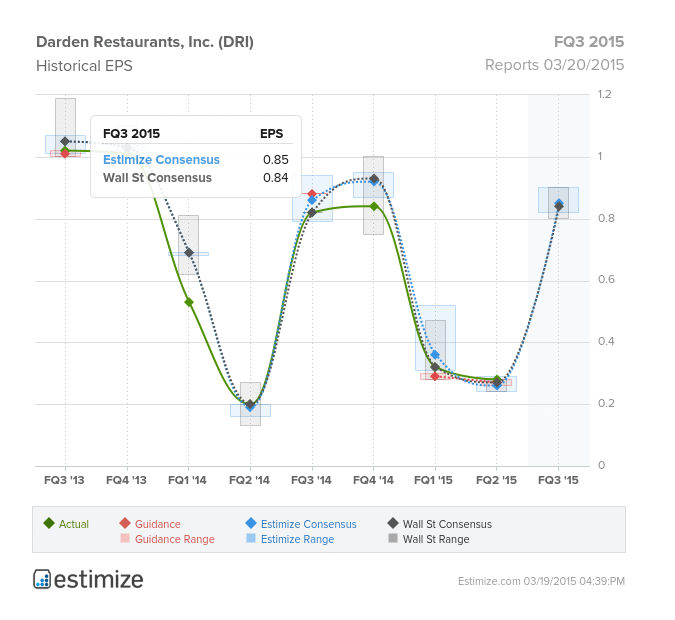 Anyone that follows this space knows that Darden has been struggling for the last couple of years, but the industry itself has been doing wonderfully. Trends in casual dining continued to improve during the second half of 2014 as the middle-class, typically the target for casual dining spots, saw higher disposable incomes due to lower gas prices, rising employment and lower inflation. As such, competition has been fierce, with Darden losing market share to its peers for the last several quarters. 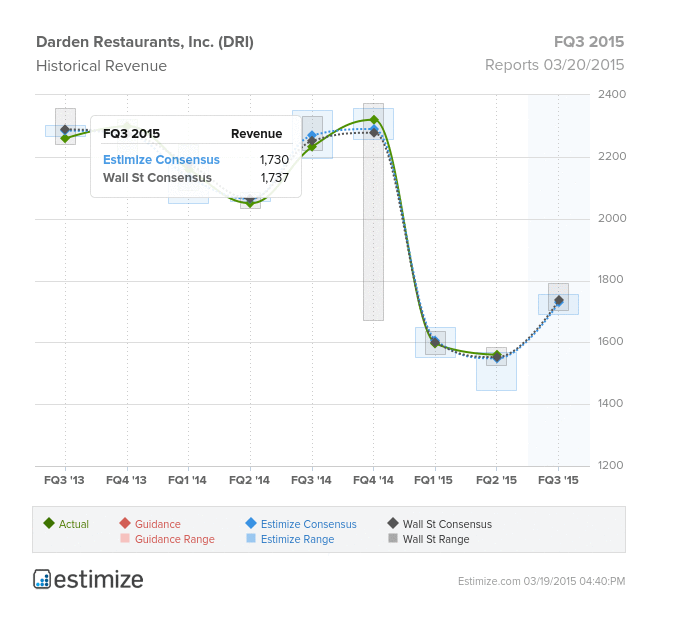 Recognizing this, Darden decided to spin off it’s weakest link, Red Lobster, in the summer of 2014. The move was done in order to focus on the company’s largest unit, Olive Garden, which now boasts more than 800 locations and is responsible for nearly half of the sales generated by Darden. That tactic seems to be paying off, with Olive Garden topping same-restaurant sales estimates in fiscal Q2 2015 and helping the company post it’s first quarter of profit growth after 8 consecutive quarters of negative growth. As a result, Darden Restaurants raised the low end of its previous 2015 profit guidance. It now expects adjusted EPS to be in the range of $2.25 – $2.30, up from the earlier projection of $2.22 – $2.30.

Since the completion of the Red Lobster sale, Darden’s shares have soared 40%, reaching a 52-week high of $65.75 just today.  Shares are up around 11% for the year.